I was perusing the isles of the Hobby Lobby one day, and a yarn caught my eye:

I immediately thought of my Grandma Rilla.  She is a hard-working farm wife, and she is a hard-core jeans girl.  I've been wanting to try weaving a scarf in a basic twill using a variegated yarn, and thought this would be a good yarn for that!  I used 3 skeins for my project.

For the weave structure, I decided on an extended zig-zag.  Many native Americans used triangles in their pottery and rug weaving, and I felt this yarn had the southwestern feel also.

The colorway, Mustang, lit a light bulb in my head.  I'd remembered learning that native Americans considered horses sacred.  I did a little research, and learned that often times, the horse was viewed as a "sacred dog".  This was because early plains Indians lived nomadic lives, and often moved their homesteads.  Everything they owned was carried on foot and with the help of dogs, who wore packs and saddle bags, even pulling primitive carts.  The dogs were very important to their way of life; essential.  When the horse was brought to the new world by the Spanish in the 1500's, the Indians obtained some and quickly found them invaluable as well.  They became as revered as the dog, and without the language to describe the horse, they called it the "sacred dog".  Isn't that fascinating?

Well enough history for today, but the point is I decided to call this project my "Sacred Dog Scarf".

I set out to make a 6.5" wide infinity scarf, and dressed my loom.  I began weaving, and quickly fell into pattern with the zig-zag.  Here is a picture of the scarf on the loom: 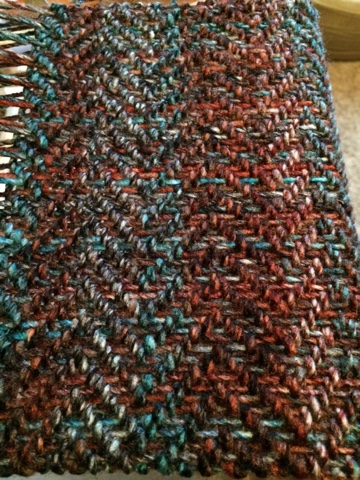 After weaving until I ran out of weft, I took the scarf off the loom, secured the ends with machine zig-zag stitch, and sewed them together in a loop.  Then I took an old pair of jean shorts I'd saved, cut off the leg hem, and stitched it around the seam.  I further secured the jean material with four coordinating buttons.

I'm so happy with the finished results: 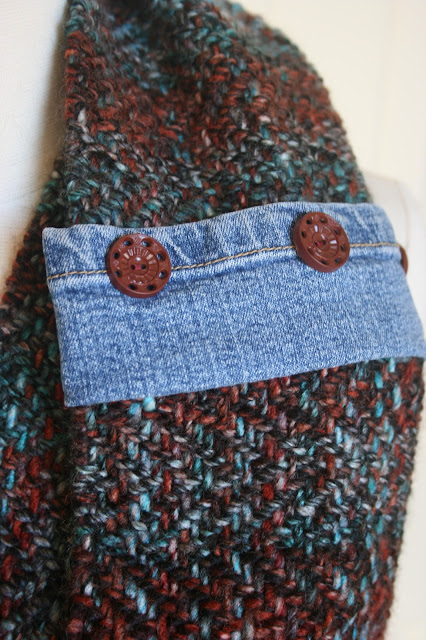 I presented this to my Grandma at our early Thanksgiving gathering this year, and she was impressed!  She loved the fact that she could wrap it around twice and wear it with a coordinating shirt or wrap it three times and really be protected against the cold.  I can just see her putting it on to go bottle feed the calves in the barn.  :)  I hope she gets some good use out of it.  I made sure to tell her she can machine wash it!  Always important for a no-fuss gal!