Four years ago, I set out to make a snuggle wrap for my unborn child.  Despite multiple attempts and much frustration, I frogged the project and moved on.  That yarn has been sitting in my stash ever since.

"That" yarn is Debbie Bliss Cashmerino DK.  It's such a lovely yarn, I'm not sure why they discontinued it!  But they did.  It's a 55% Merino, 33% Microfiber, 12% Cashmere blend that is so soft to the touch.  So soft, in fact, that I usually caress it against my face when I pick it up.  I have two colorways of this yarn, the green I used in this project (called 18011 - very inventive, huh?), and a blue (18044).  The green looks to me like a "granny smith apple".  A bright light green.  I only had 1 ball in it, so I looked for a small project that would be a one-skein-wonder.

I finally decided on Winding Way Mitts by Cheryl Beckeric.  I loved the cable pattern along the top of the mitts.  So off I started.

It was a fast knit, working up easily, and a really nicely written pattern.  The only snag I encountered was a yarn shortage.  Of course...when yarn is discontinued, I WILL run out.  But thankfully, a super nice lady on Ravelry sold me some of her stash!  *I can't say enough about how nice it is to have that networking available.  Thanks, Ravelry!*  Once I received her shipment, I easily finished up! 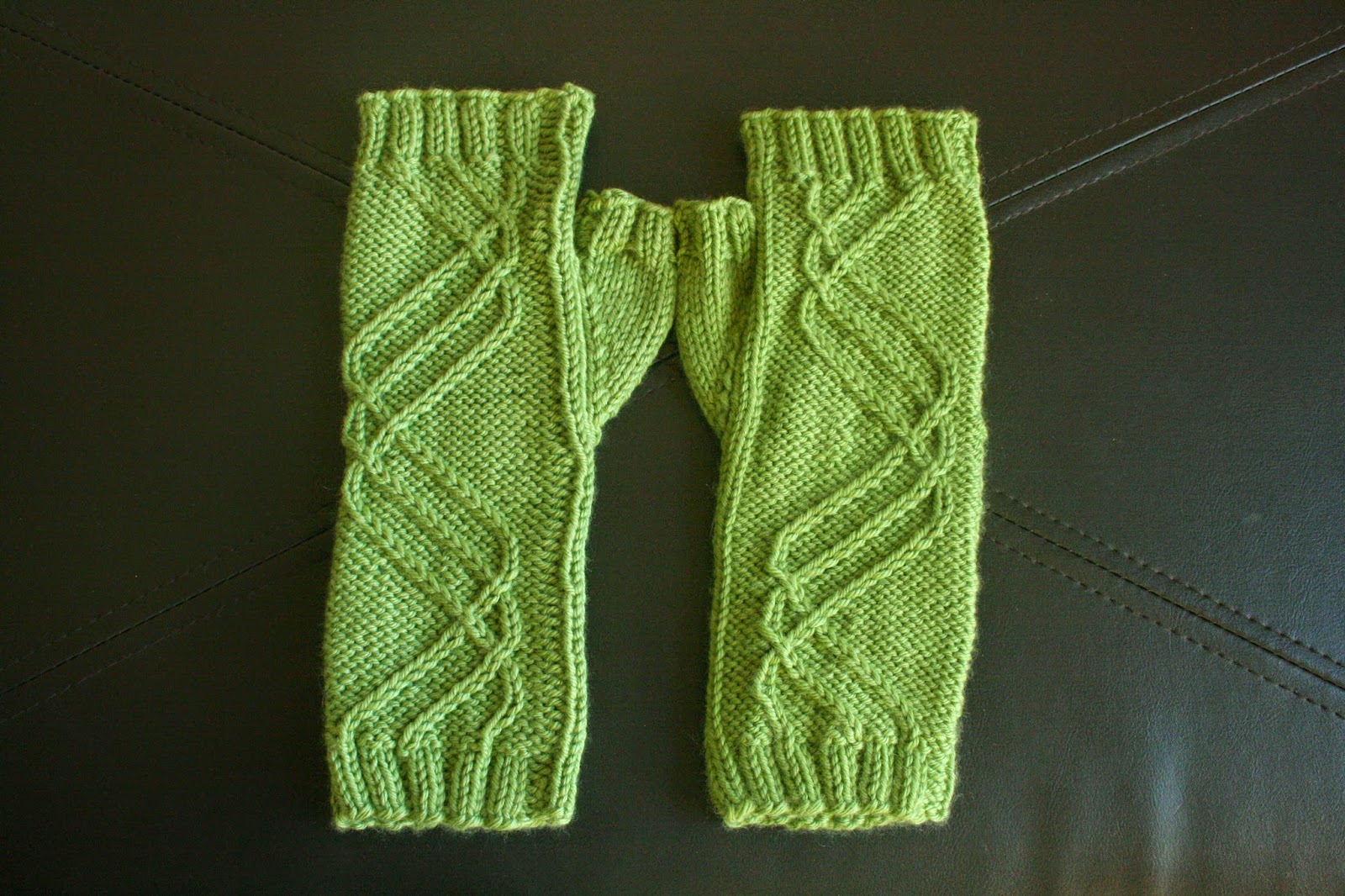 Ok, now pardon my still-imperfect photography skills, because the above photo is the closest representation of color. 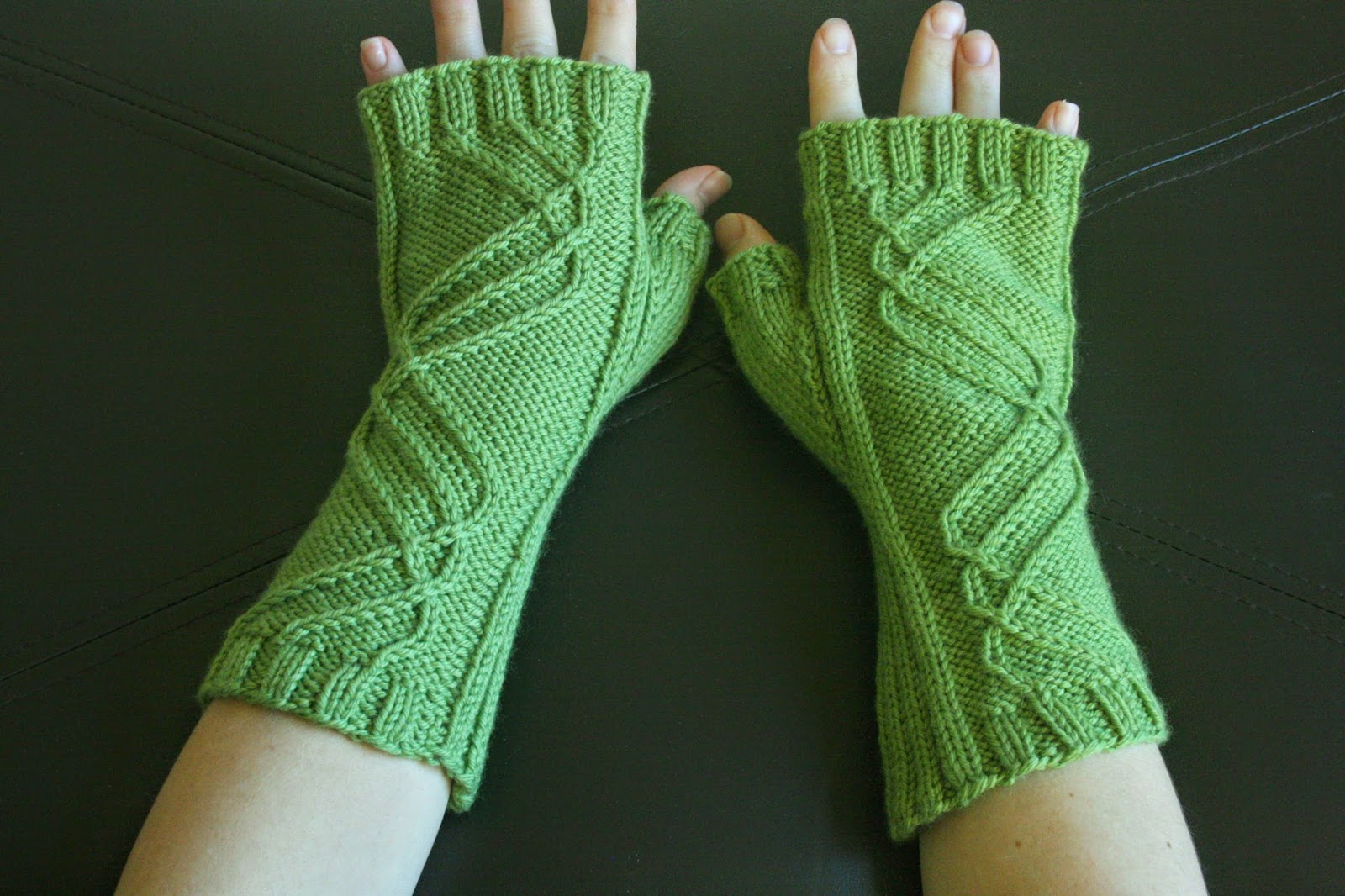 I have size x-small hands, so these are large on me.   They will fit hands 6-9 inches in circumference. 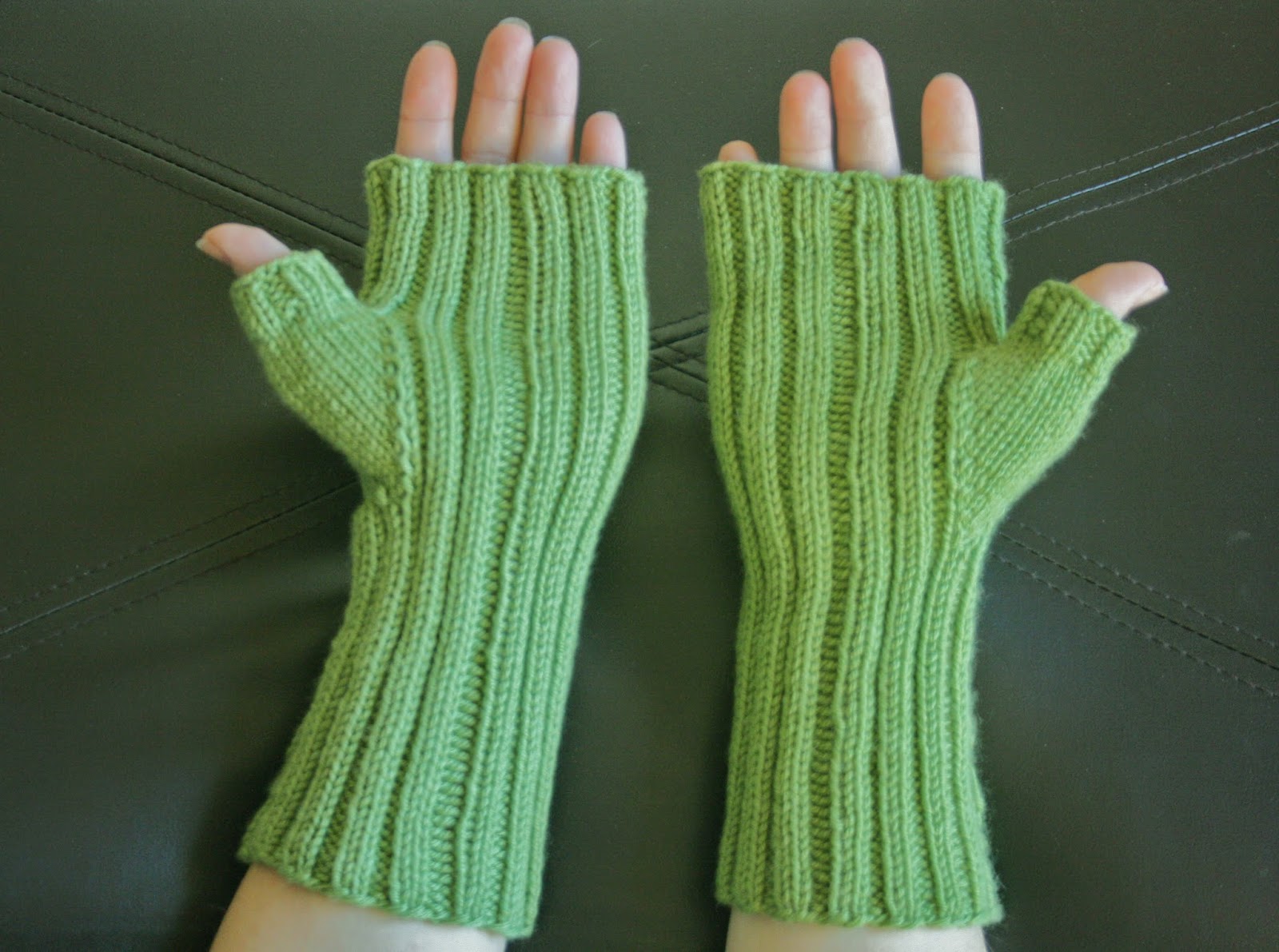 The ribbing on the underside of the mitts ensures that they stay snug! 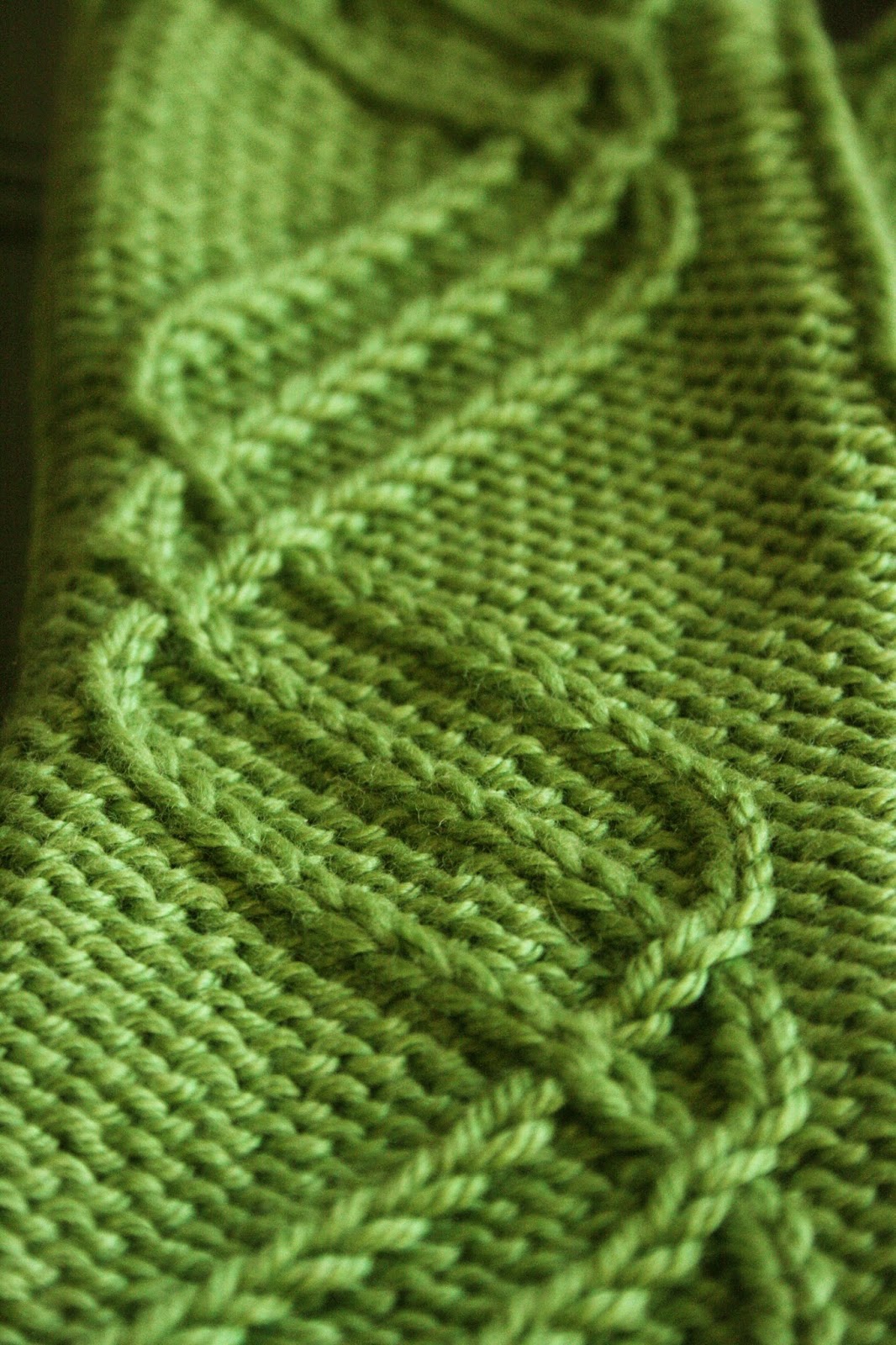 Aah, sometimes I could just look at yarn close-ups all day.  That's weird.  But true.  I like being real.  :)

And now for the exciting part.  I want to give them away to someone!  If you'd like a chance to win them, click on the link below for my Facebook page.  Go there, "like" me if you haven't already, and share the post.  Then comment to let me know you've done so, and you'll be automatically entered.  I'll randomly draw a winner on Feb. 8th, 2015.

I have a new weaving project finished and all my ducks are in a row to show you!  I'm excited to finish up what I was weaving at the Whimmydiddle craft fair - my Spring Diamond Scarf.

This design arose from inspiration from the yarn, as it often does for me.  I really wanted to try weaving with tencel, a cellulose fiber that can actually be obtained by using recycled wood pulp.  It has gained popularity recently due to its shine, softness, wrinkle-resistance, and breathability.   So I researched and found a lovely variegated yarn from Prism Yarns (who I love and have worked with before on my Pamuya shawl).  This time I chose their smaller weight yarn, Delicato in colorway Arroyo.  After seeing and feeling the yarn, I found a 2/2 twill design, using M&W variations threading that I thought would look nice with this yarn.

I had initially intended on using the Delicato as both the warp and weft, but after I had decided on my weave structure, a diamond pattern, I decided that the color changes might muddle the design.  Away to my yarn stash I went, and I came up with some 3 ply cotton crochet thread.  I was attracted to it's sheen, which was like the Delicato.  I decided it would make a nice background for the diamond structure to stand out.

As you can see on my weaving record sheet, available below, I had intended on making 2 scarves on this warp.  A couple of problems arose.  First, I was relying on using a tape measure, moving it along as I wove, to know how long my scarf is.  Once I would reach the desired length, I would stop, weave spacers for the fringe between the scarves, and continue with the second scarf.  Well, as I was weaving this at the craft fair, talking with people walking by, being interrupted for sales and such, I completely forgot to advance my tape measure, rendering it useless.  It got wrapped up in the cloth beam and there it stayed.  Grr........

No worries, I thought.  I'll just continue weaving and then cut the scarves apart, however I'll have to abandon the fringe.  I decided that was fine, I'd just hem the scarves.  So on I wove.

Then, when I was finished weaving, I unrolled the cloth and was surprised that it was shorter than expected.  I went back and looked at my math - I TOTALLY LEFT OUT ALLOWANCES FOR TAKE UP (and shrinkage).  For heavens sake.  After consulting a few friends and family, I decided that cutting the material in half would render two too-short scarves, and just cause a lot of headaches with hemming anyway.  *insert steam coming out my ears here*.

But you weave and learn, right?  I think I'll double check my math from here on out.  Ah, growing pains.

But enough gab.  Here's the pictures! 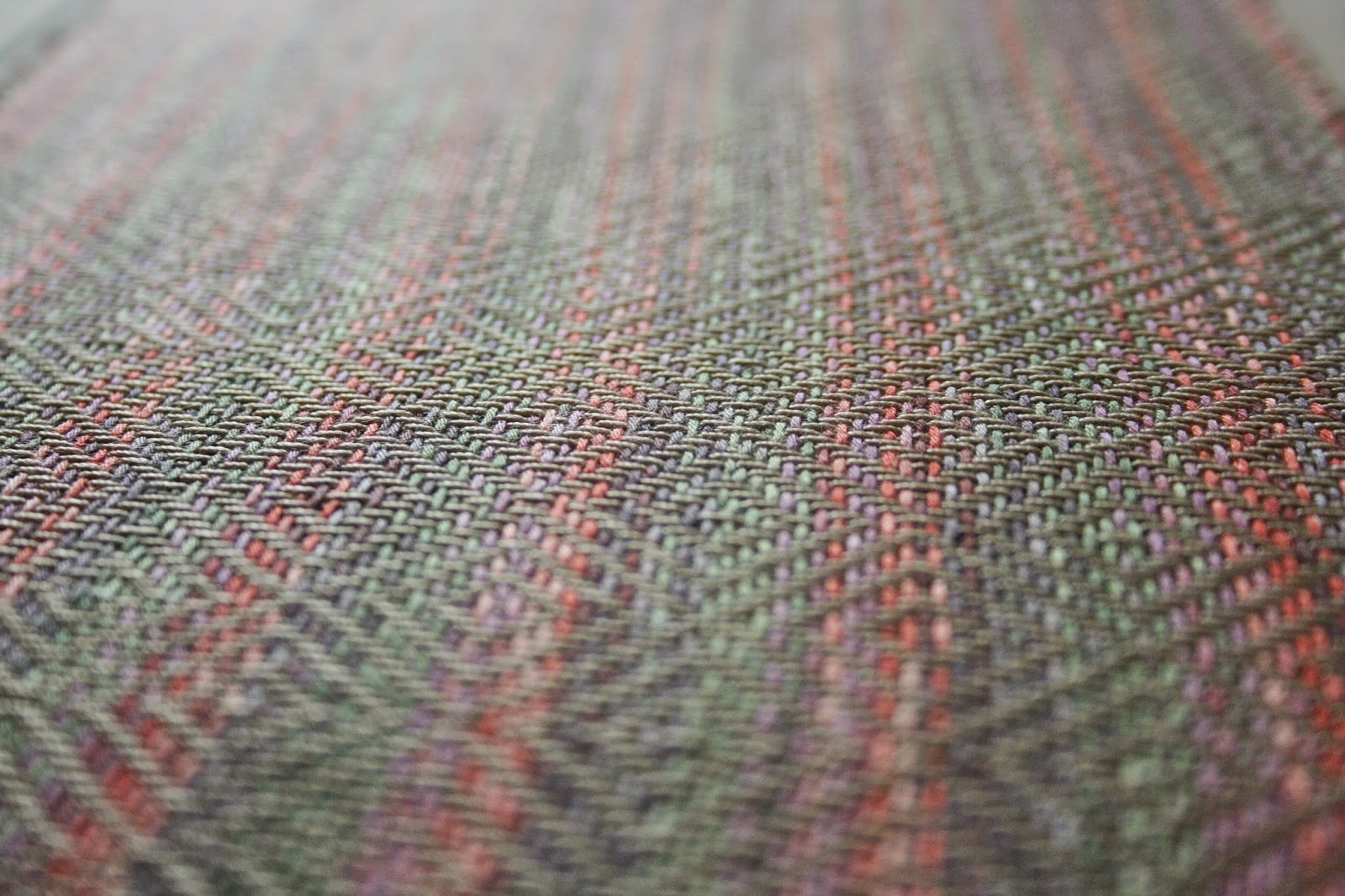 After pressing, the colors just shone! 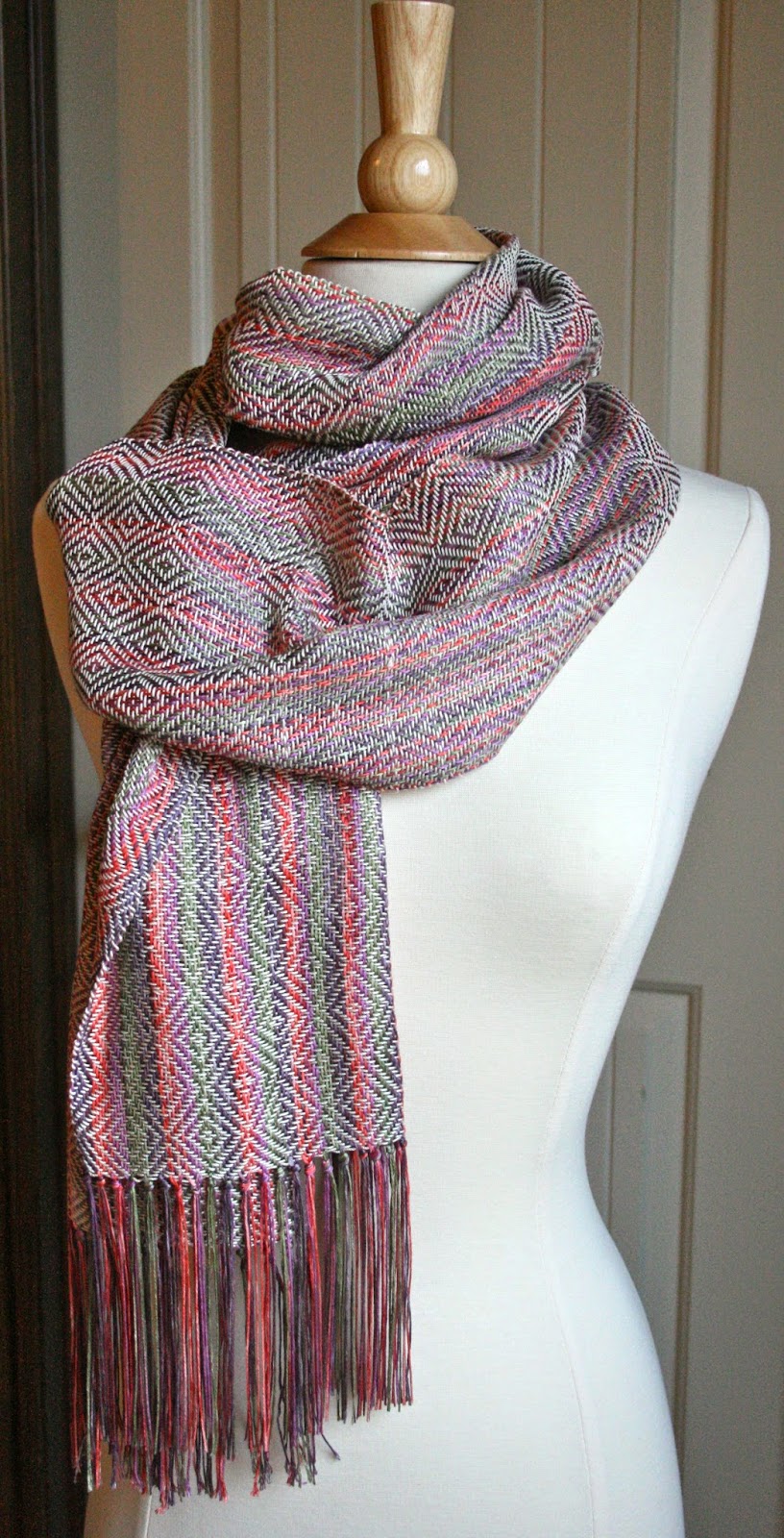 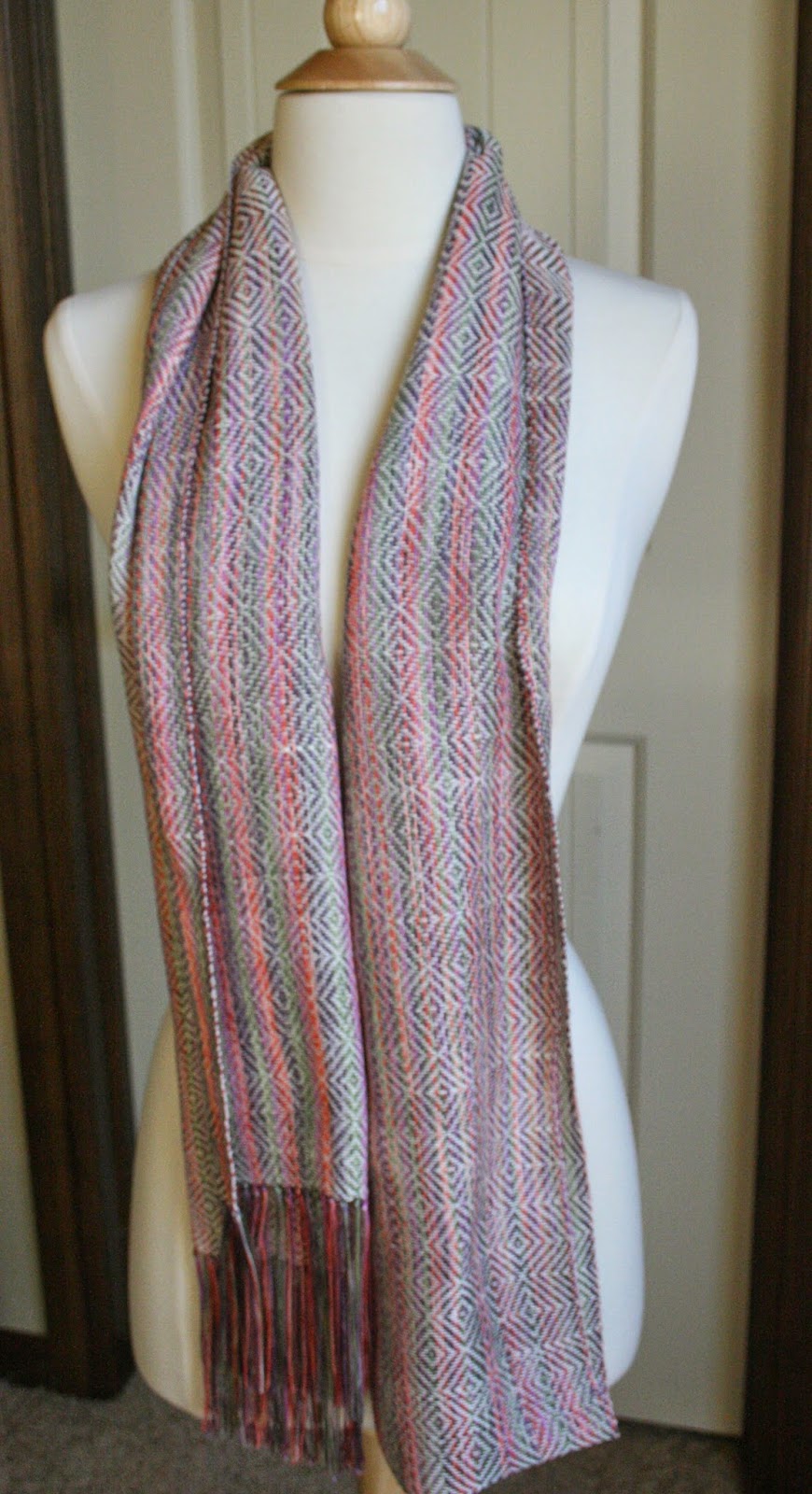 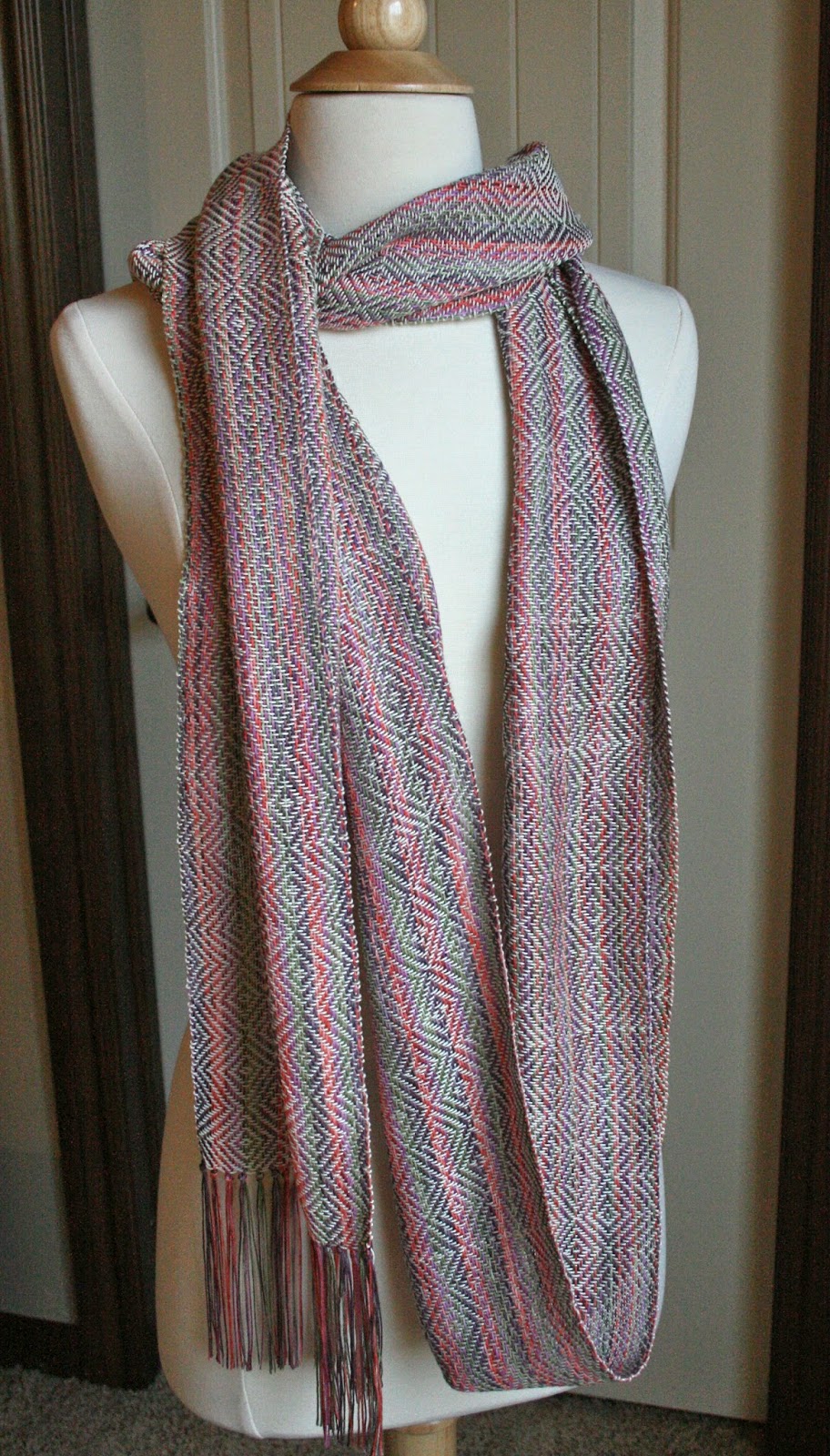 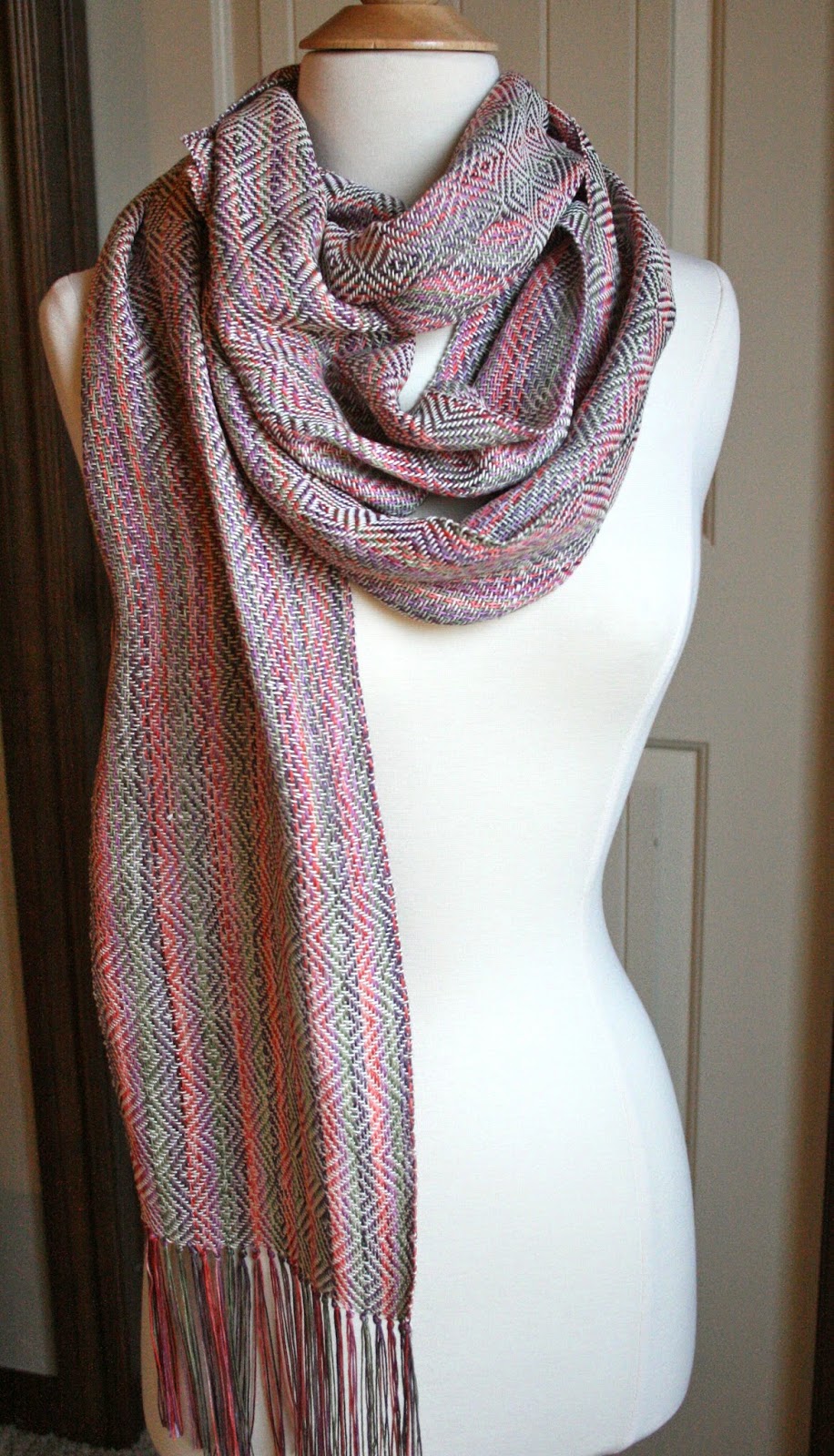 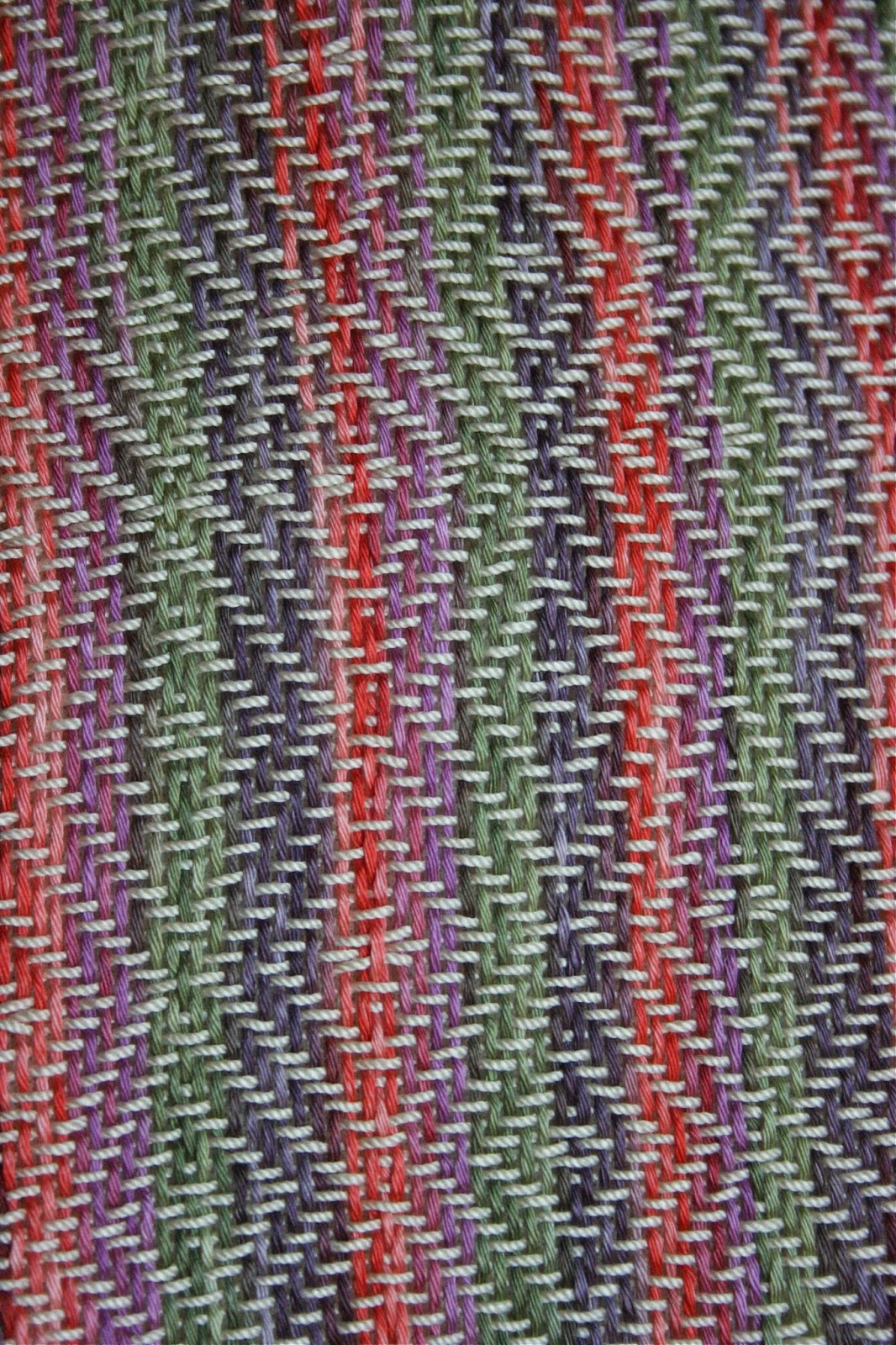 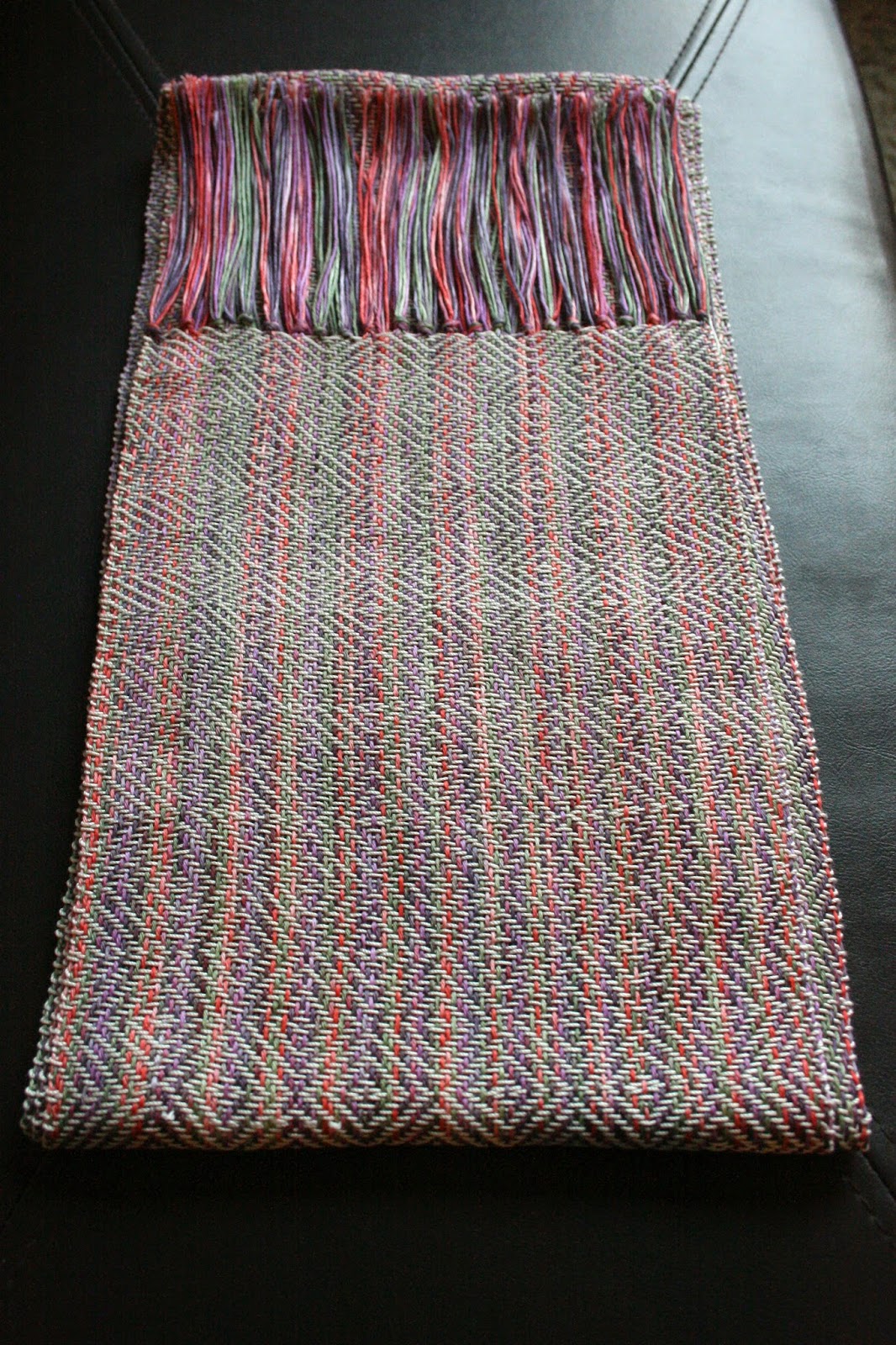 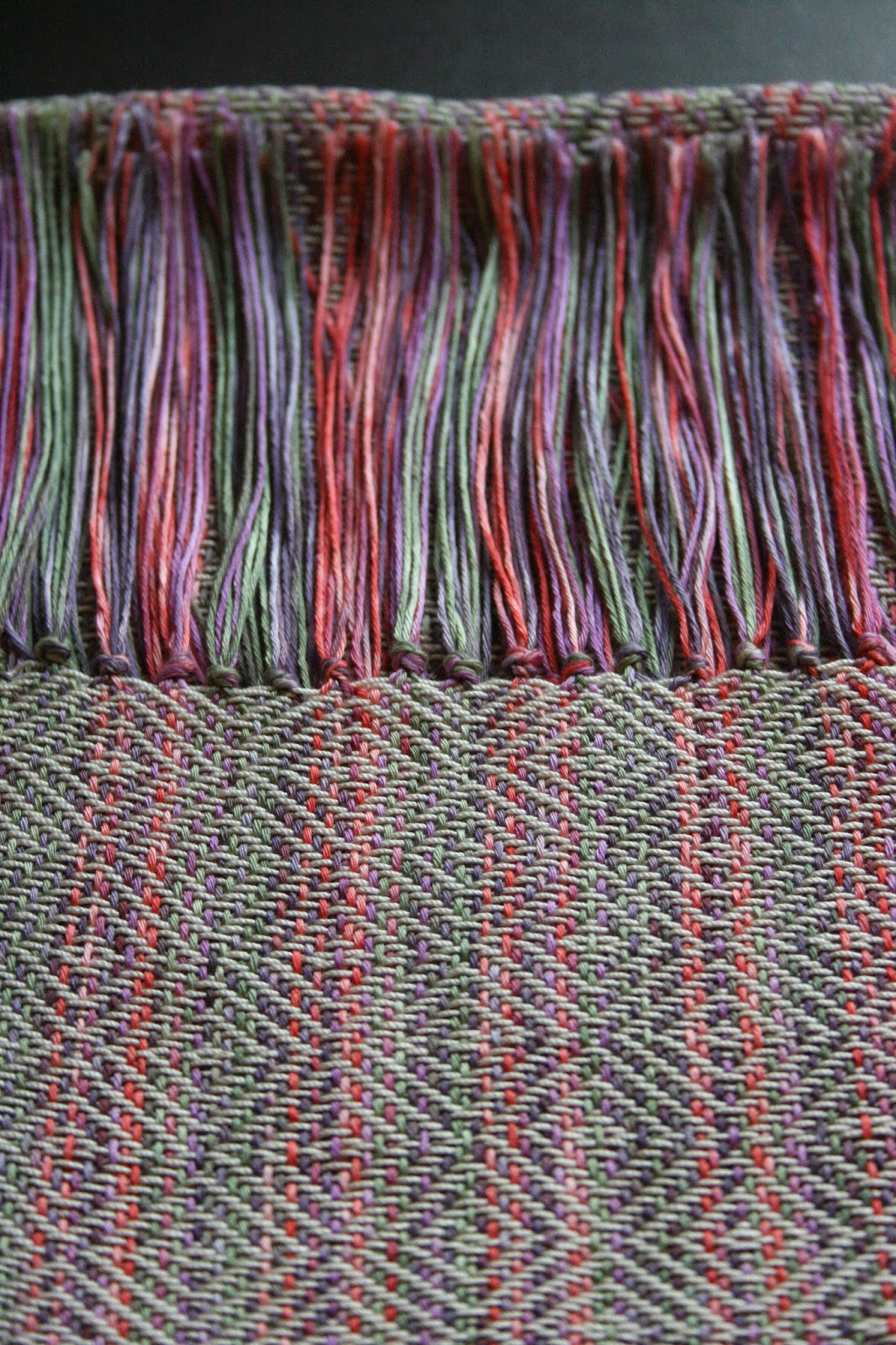 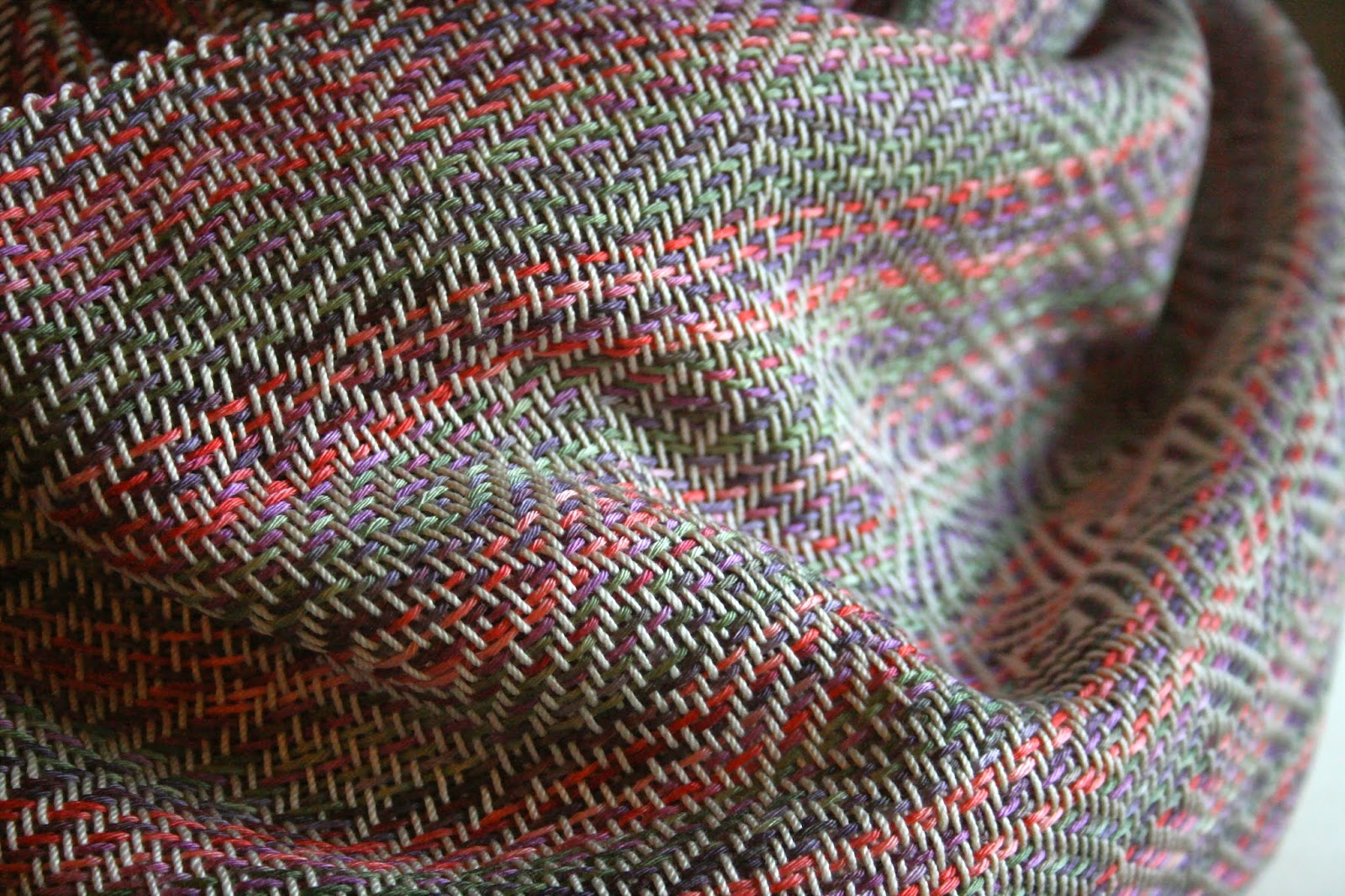 I devised the WIF pattern, and have it available HERE, for those who use weaving programs and would like the draft.

I learned so much with this project - as I continue to learn with each project I complete!  Now....what to put on the small loom next.....???

I've been making a lot of baby blankets lately.  I think that's because they're simple in construction but not as large as a full blanket, so less materials and time are used.  Also, I think there's nothing more cute than a little baby in/with handknits.  Hats, blankets, buntings, sweaters, big flower headbands...they're all adorable.

I am continuing to use some yarn that was given to me by Grandma.  I'll tell you right off hand that I dislike this yarn in this pattern.  As previously established, I'm anti-acrylic.  However, I had all this red yarn, and I found the perfect pattern for it: Babylove Blanket by Meg Hollar. 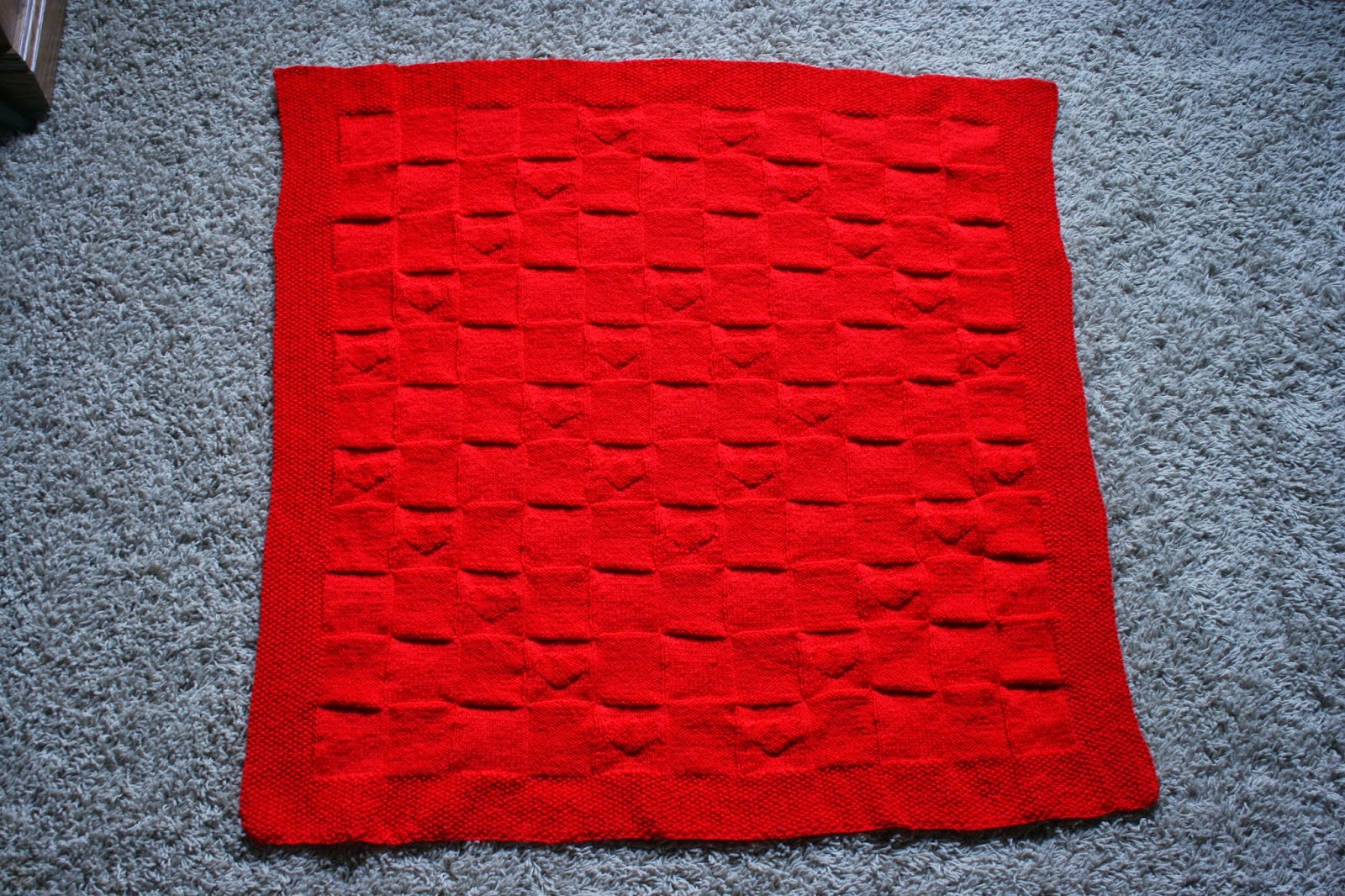 The yarn is Red Heart Baby yarn (a discontinued line).  It's a light fingerling weight yarn.  It would have been even more fabulous in a less-stiff yarn (the hearts would have stood out more).  But again, with acrylic yarn, you can't beat the ease of care and sturdiness. 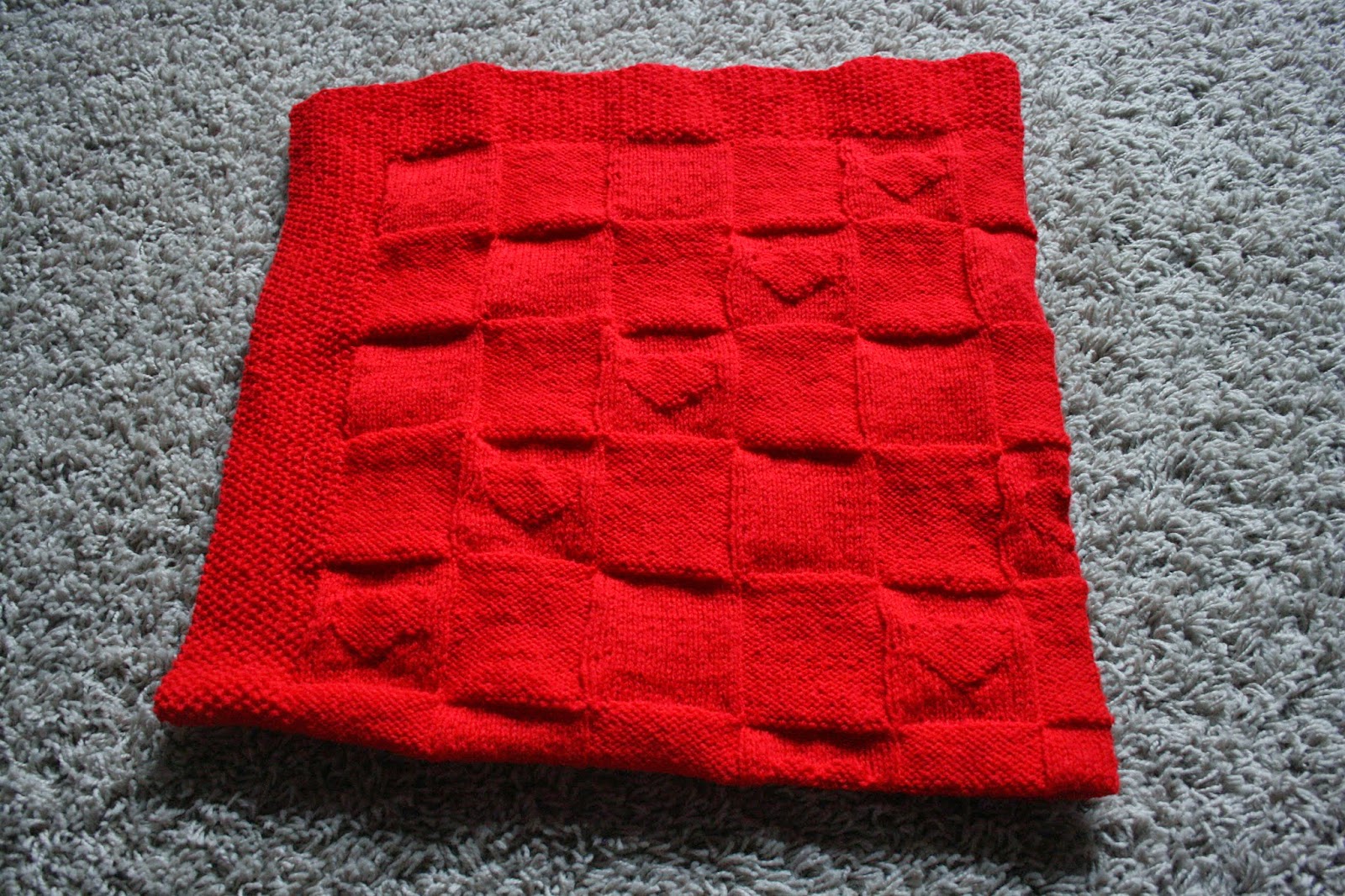 This blanket took a LONG TIME to make - 3 months to be exact.  In my current workload, this translates to approximately 16-18 hours of solid work.  With 195 stitches on each row and 312 rows completed, I worked a total of 60,840 stitches in this blanket.  The hearts were fun to work, though, and broke up some of the tedium. 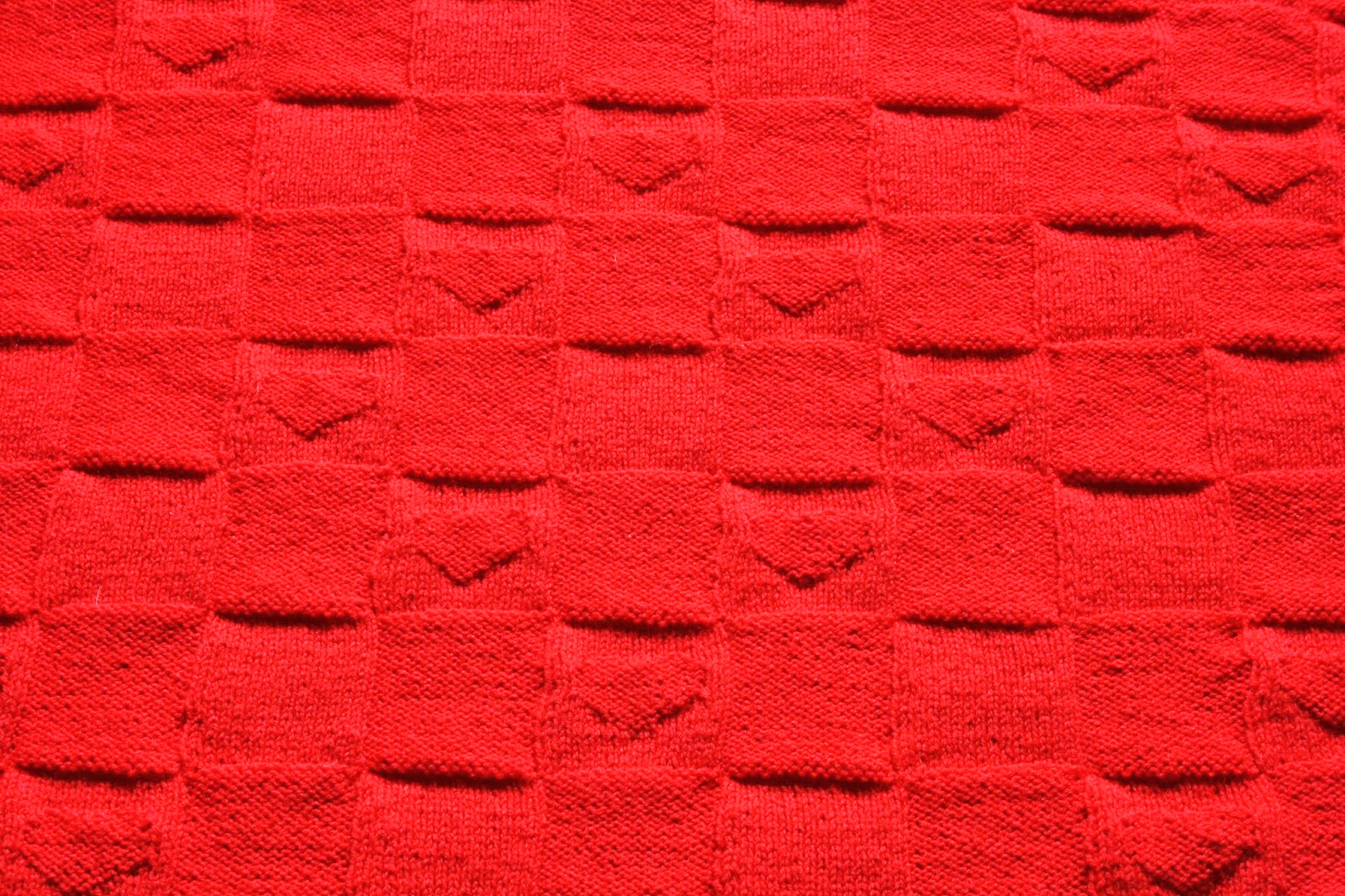 This blanket is going to a special couple.  They have been friends for several years, and are expecting their first baby, a boy.  They've waited for a long time to become parents, and Chris and I are so thrilled that they are getting their chance.  The hearts on this blanket represent only a fraction of the hopes and prayers that have been lifted up for this baby, and I hope it gets a lot of loving use.
Posted by Unknown at 10:53 AM No comments: