I've sat and stared at my table loom and avoided it for long enough!  Time for action. 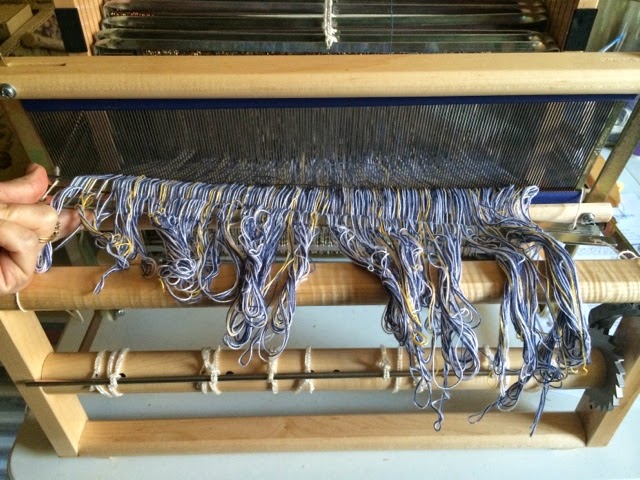 After beaming on nearly 6 yards of cotton, I ended up with super uneven lengths at the end.

Now there are a couple reasons this may be.
1. When measuring the warp on the warping board, starting off, the yarn is wrapped in contact with the wooden pegs, so they were all the correct length.  But as more threads are added, they were on top of earlier threads, which made the later threads longer.
2. When measuring the warp, if the lengths are pulled tightly, it will bend the pegs inward. This will make your yarn shorter than desired.
3.  The beaming process was uneven, which itself can be caused by several things:
a. Inconsistent tension/speed while rolling
b. Irregularities with the warp spacing material (cardboard between the layers of warp)
c. Tugging on the loose warp as it's being beamed.

After considering all this, I decided the only one that made sense was 3b. I had been trying to use cut paper bags as a warp spacer, and with this length of warp, I needed 9 of them. I also had so many tangling issues while beaming, I'm sure that contributed. Bottom line was I needed to rebeam.

Now no book I have describes the best way to pull forward your warp and rebeam. I found some tips in weaving forums online, devised my plan, and gave it a try...hoping tears would not be involved.

First, the front warps needed tension. For this, I used water bottles. I fussed a good while trying to figure out how to secure the threads to the bottles, and eventually used rubber bands. 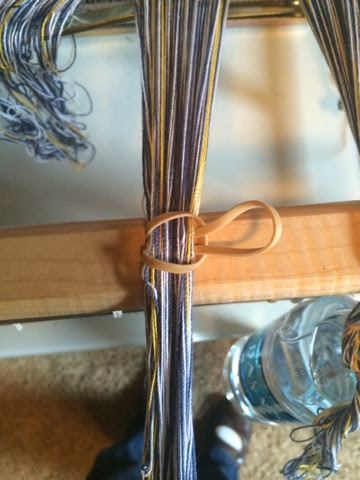 I divided the warp into 1-2" sections, looped a rubber band through like this, and then wrapped the open loop around the neck of a water bottle 2-3 times until snug. 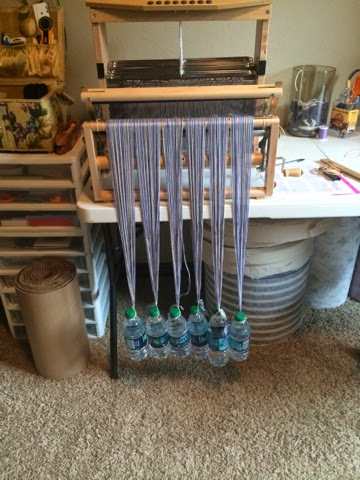 Here are all 6 bottles hanging and providing tension. At this point I simply released my back beam and slowly let it roll out. As the bottles reached the floor, I would untie the rubber bands, move the bottles up, and repeat. 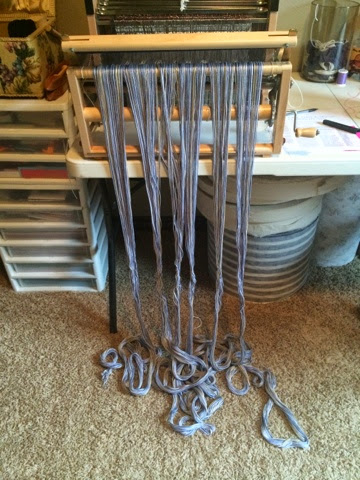 As the warp rolled out, I let the segments pool on the floor. This is cotton and it clings together like glue. So the segments didn't tangle. If I were working with another fiber, I probably would have had the segments fall into separate containers to keep them neat.

Once I saw the tie on knots on the back beam, I secured my new warp separator material: single-sided corrugated cardboard, which is in a long roll and should be much more even than the paper bags. 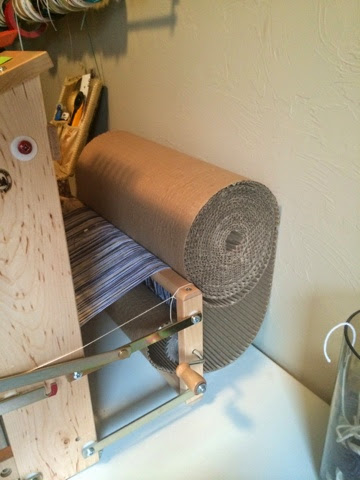 I began rolling on again the warp, as evenly as possible. It went much smoother this time, I'm sure a lot of the tangles had been resolved.

And here is my result: 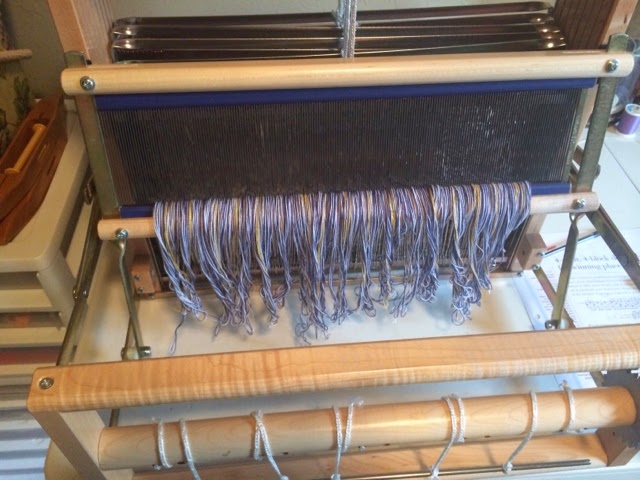 Yay!  An even roll!  I'm so glad I went to the trouble of rebeaming. And now I'll have this documentation should I ever need to do it again!  I'm sure I'll refer to it in the future.

Now to weave some placemats!
Posted by Unknown at 8:44 AM