The Leclerc Nilus loom that Chris' grandmother used was initially set up for only rag rug weaving.  She had a continuous warp set-up on it, had a huge stash of cotton rug warp, and even had made a temple.  There were also boxes and boxes of rags cut to size and wound into balls.  While initially, I really didn't have much desire to weave rugs, I've come across pictures of beautiful ones and see now that they have a lot of creative potential.

So, I wanted to start with a basic plainweave rug.  I chose some cute peach patterned fabric rags, read up on the process in my instructional book, and set in. I was amazed at how fast the process went, which shouldn't have surprised me since the rag is rather large in the shed.  It was simple, mindless, and rewarding. 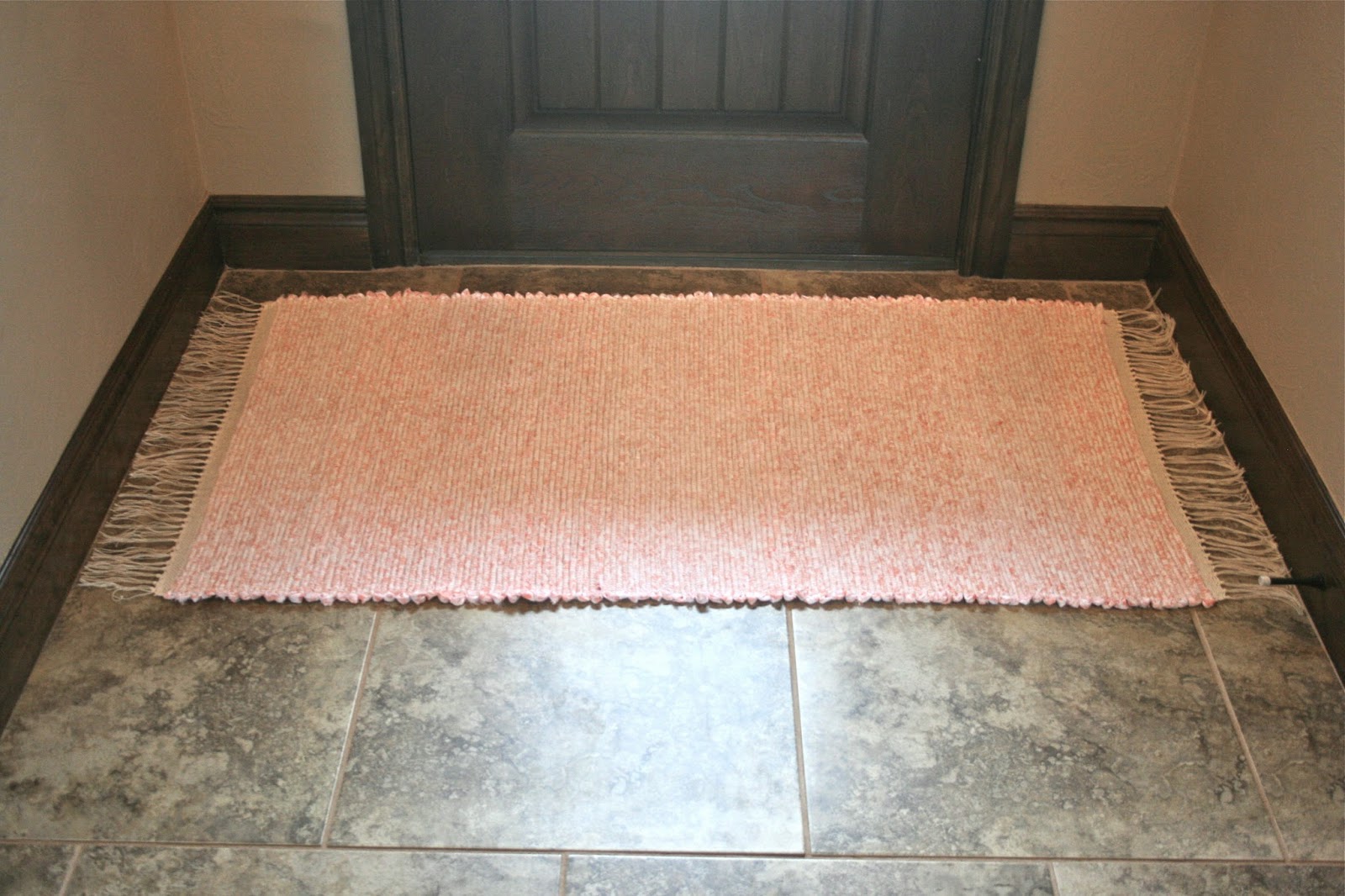 Here is the finished product in my front foyer.  On a 2 1/2 yard warp. it ended out being 53.5", excluding a 4" fringe at both ends.  I was not sure what to expect from the selvedges, as I did not use a temple, but they seem nice and even without pull-in.  The header looks nice, too! 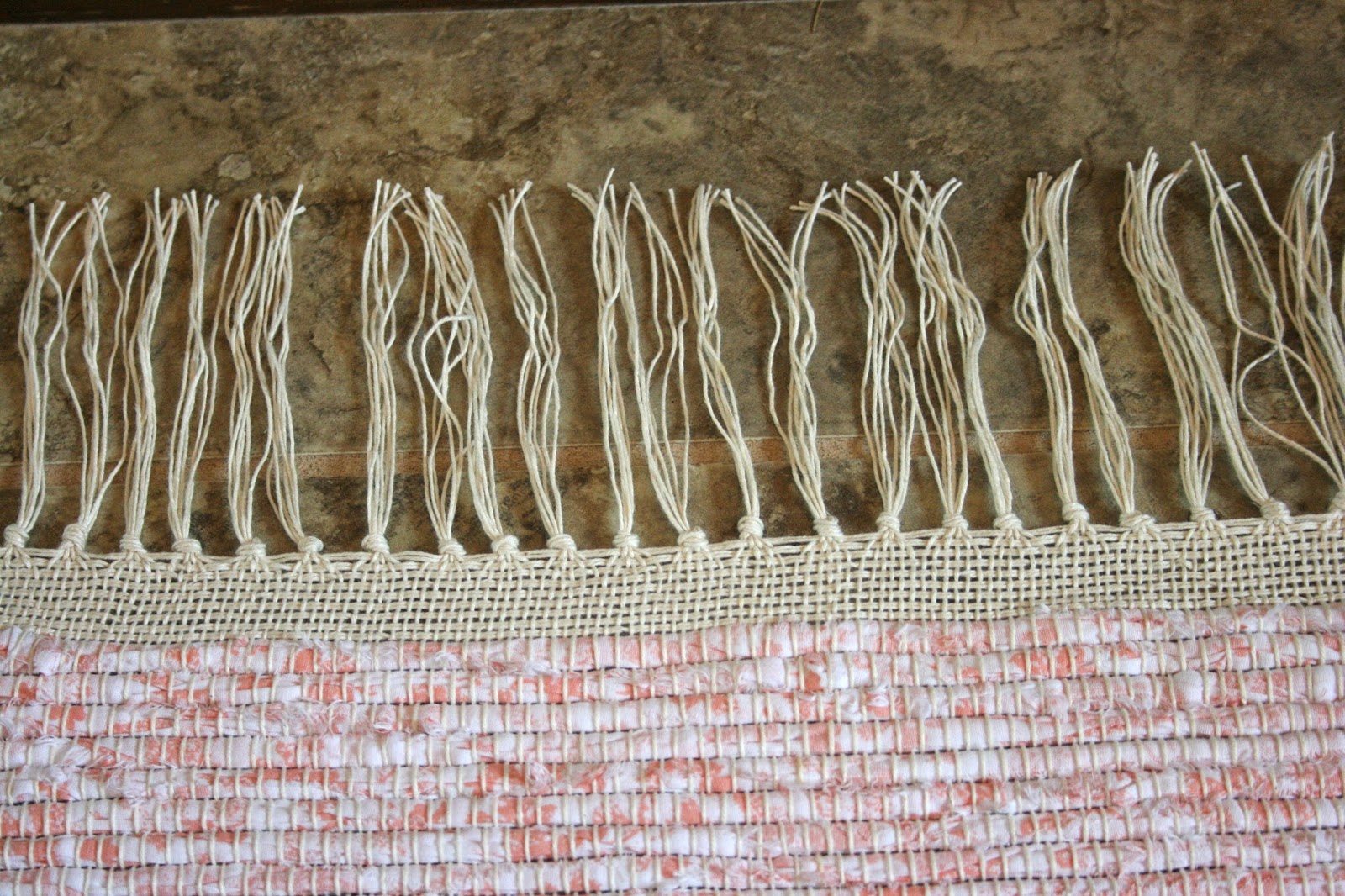 I seemed to be beating as hard as I could with each pass, but there is still a little bit of daylight seen between the weft. 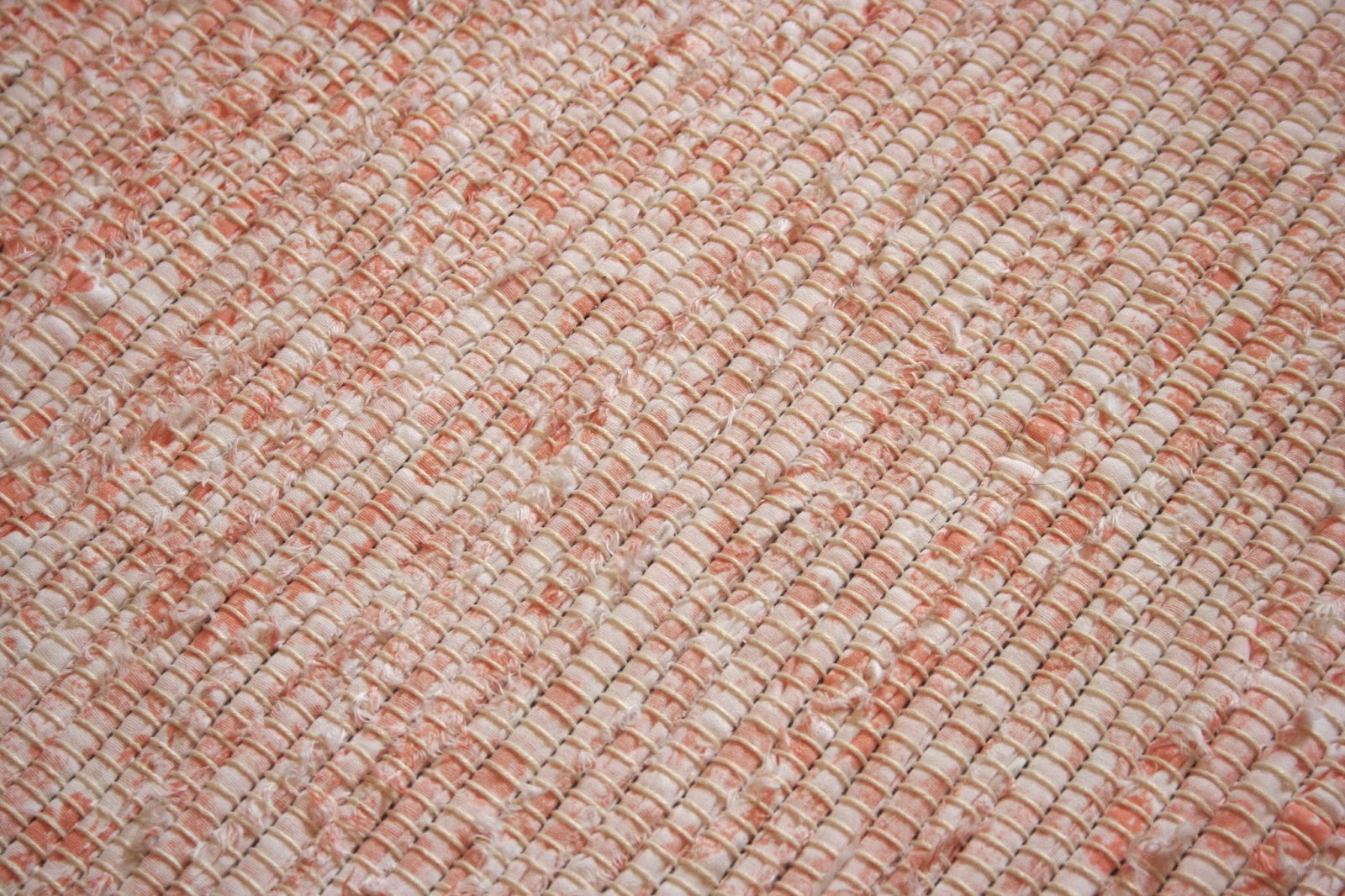 I'll have to read up on techniques for getting a firmer beat.  But regardless, I'm extremely happy with it, and I have enough material for a second rug.  I've already measured the warp, so I'll go ahead and weave it starting tomorrow.  I figured I would go ahead and get it done while the loom is still set up for this rug...before I move onto my next project: kitchen towels!  My yarn has come in! 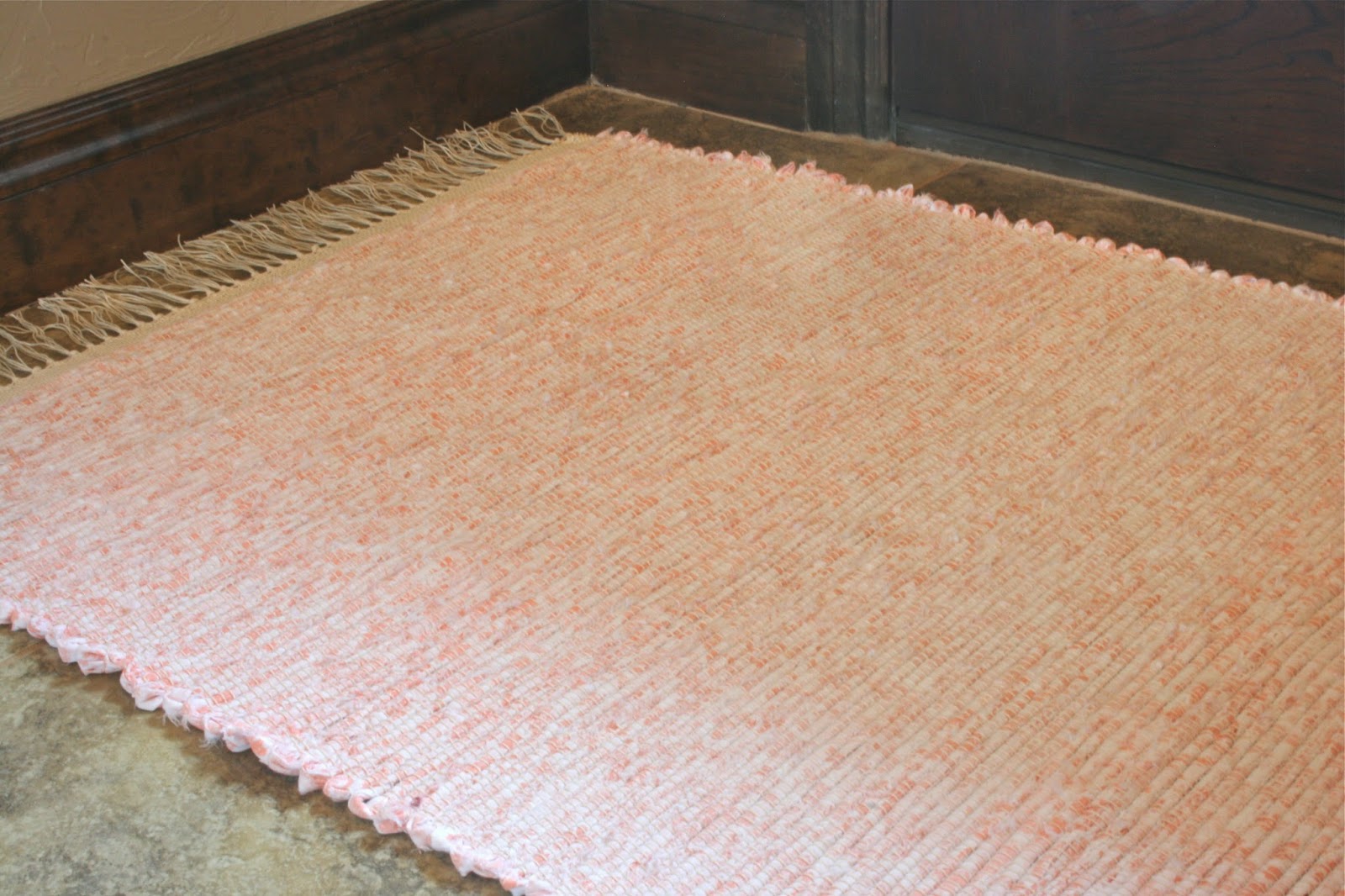 Hey...wouldn't these look nice next to a little girl's bed?!  Just thought of that! :)
Posted by Unknown at 5:47 PM No comments:

I've completed the KU colors wool stadium blanket!  I'm so pleased with it!  I learned a lot of lessons after the KSU colors blanket: including how to handle the stretchy and slippery knitting yarn, as well as a better way to twist the fringe. 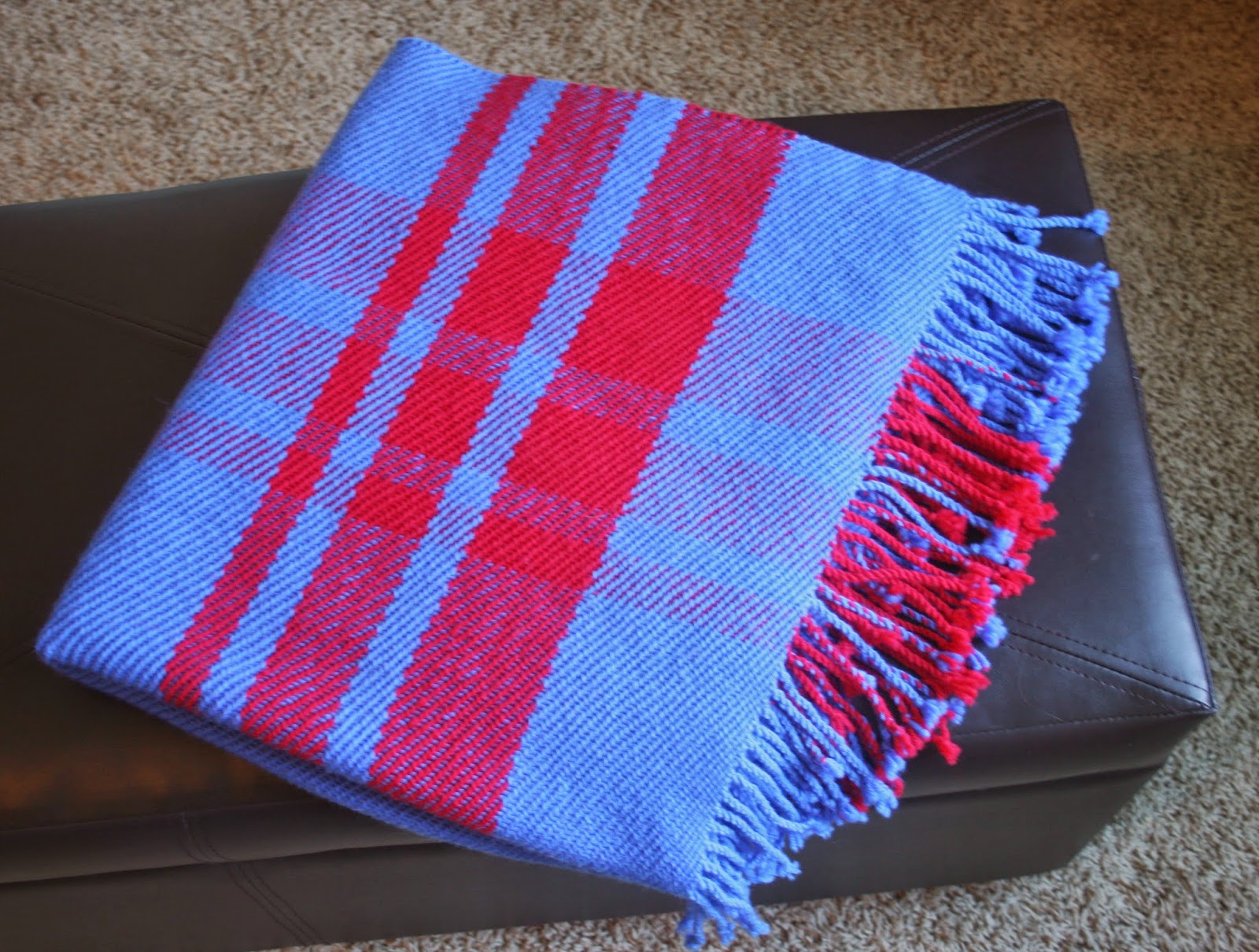 The blanket is made from 100% washable wool, what we call "superwash".  Cascade 220 superwash in two colors: Hyacinth (blue) and Really Red.  It has all the warmth of wool but ease of care like an acrylic. The blanket measures 57.5" x 33.5". 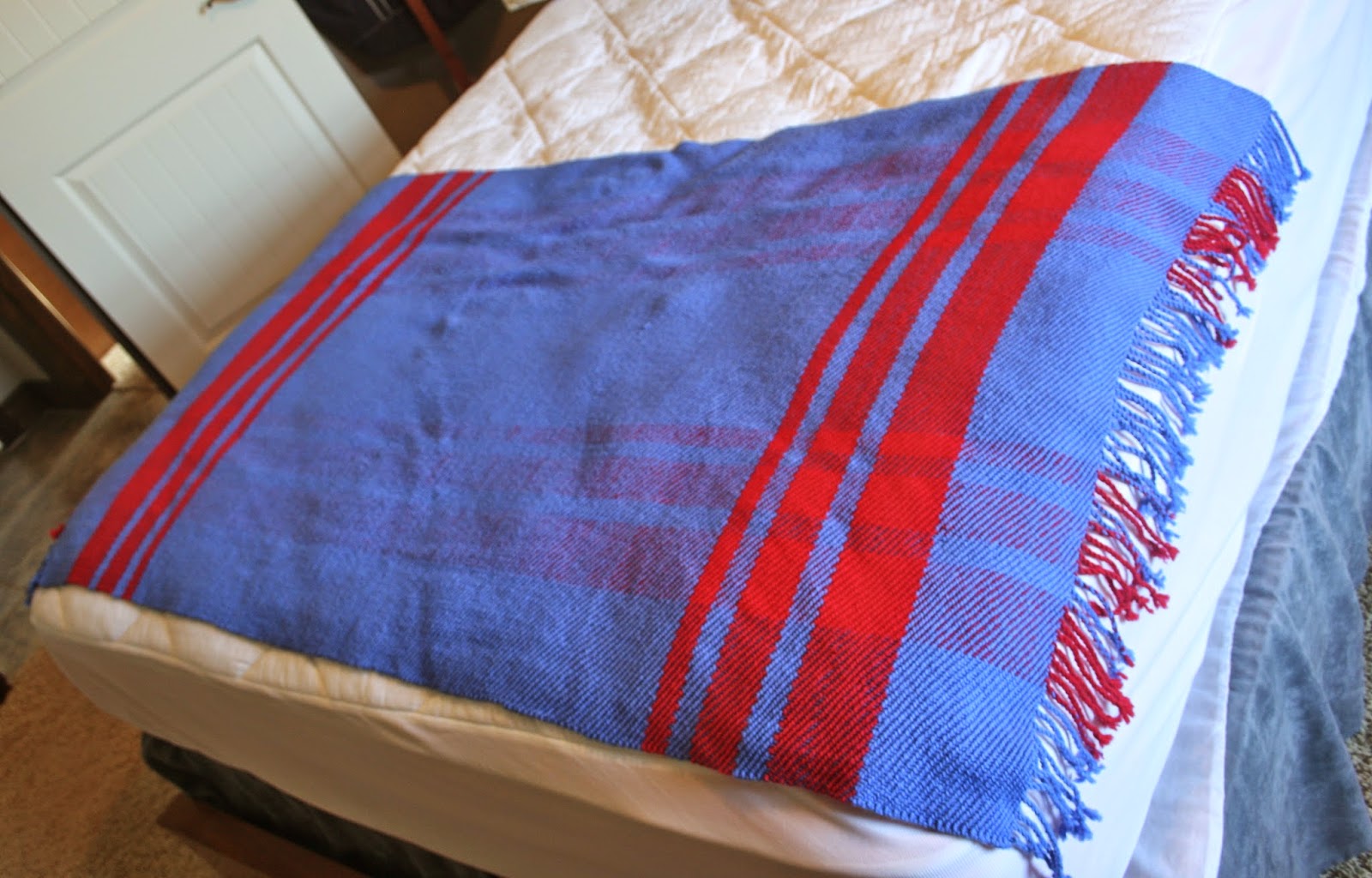 I made this blanket both wider and longer than the previous model, and I'm glad I did. It's a perfect cuddling blanket and will work great in the stadium. Here's my 4 year old, Elijah, demonstrating.  I'd say it's large enough for two people to share.  It'd be great as a seat cushion too! 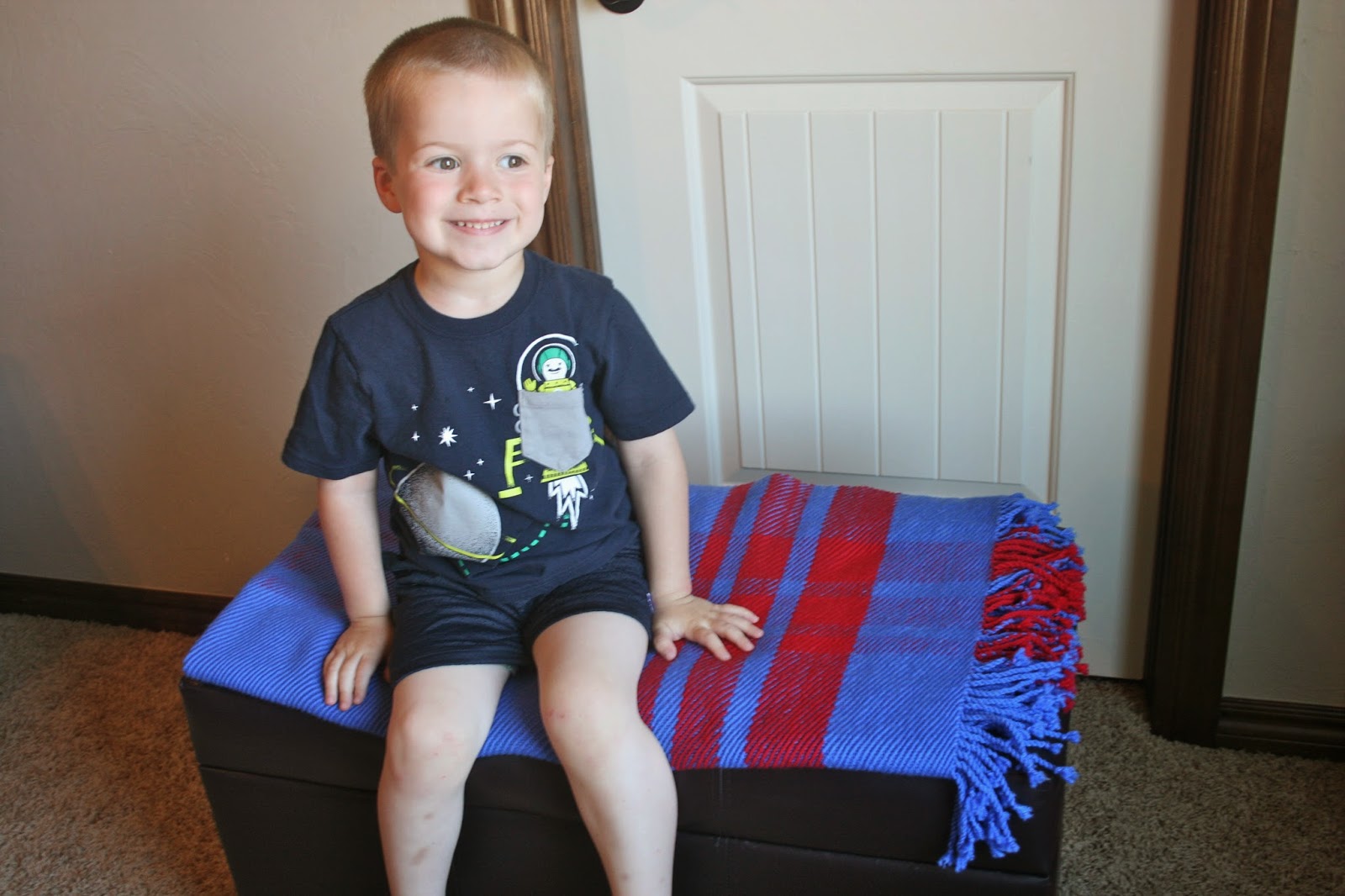 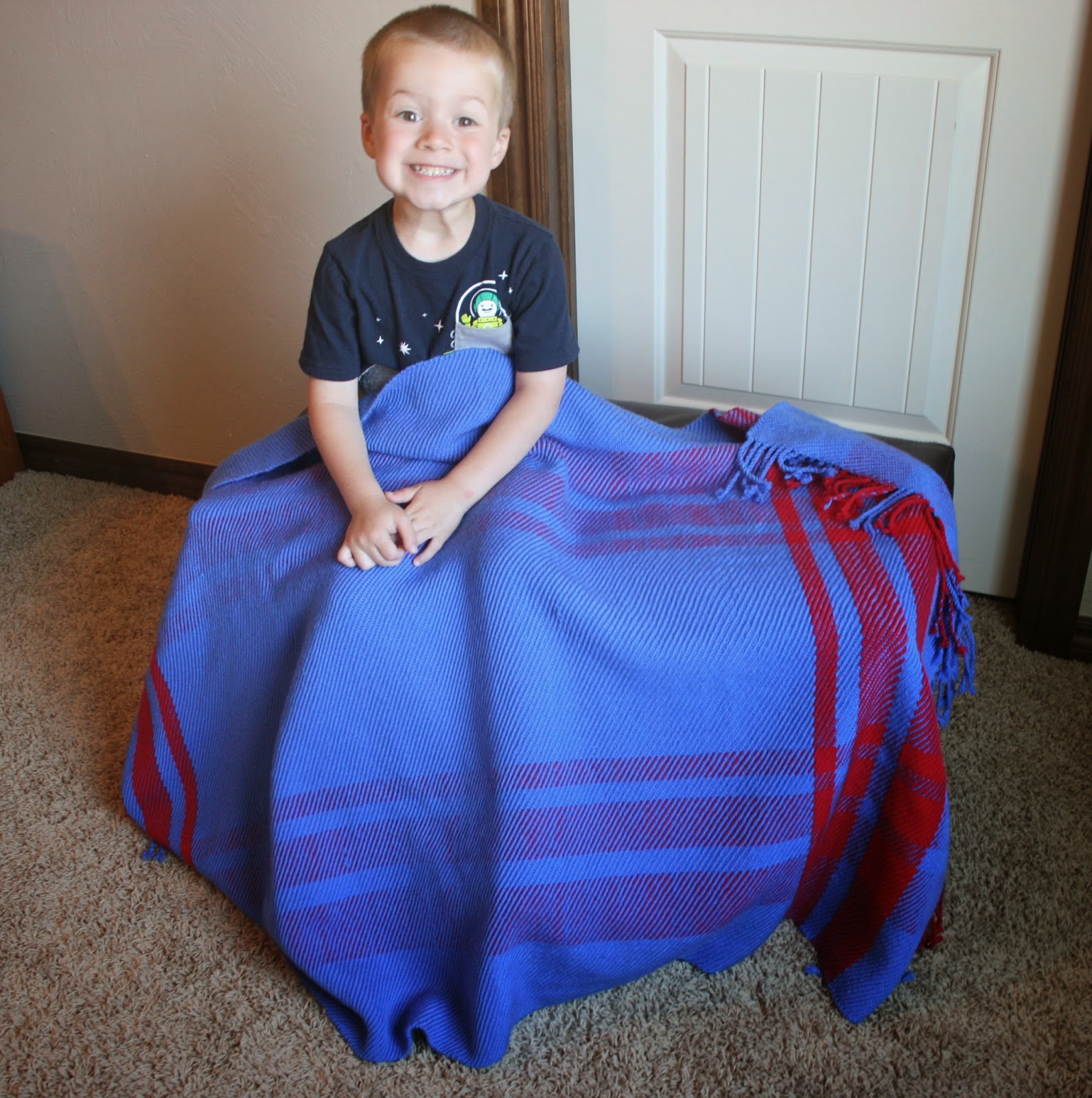 The fabric remains a bit weft-faced still, despite changes I made, but I'm happy with it! 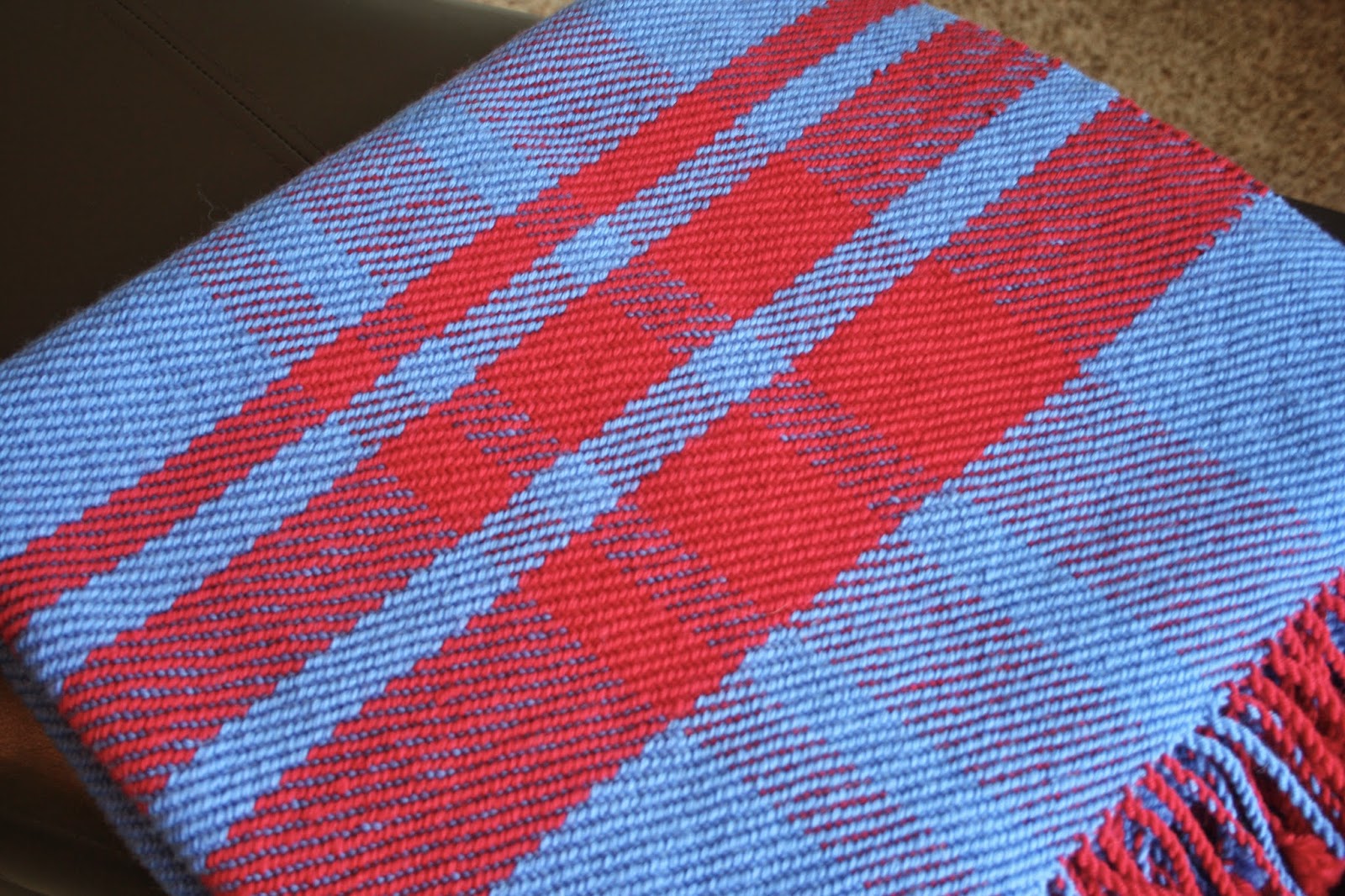 I discovered that you didn't need to tie the warp threads before twisting to make the fringe, and the result is much cleaner. 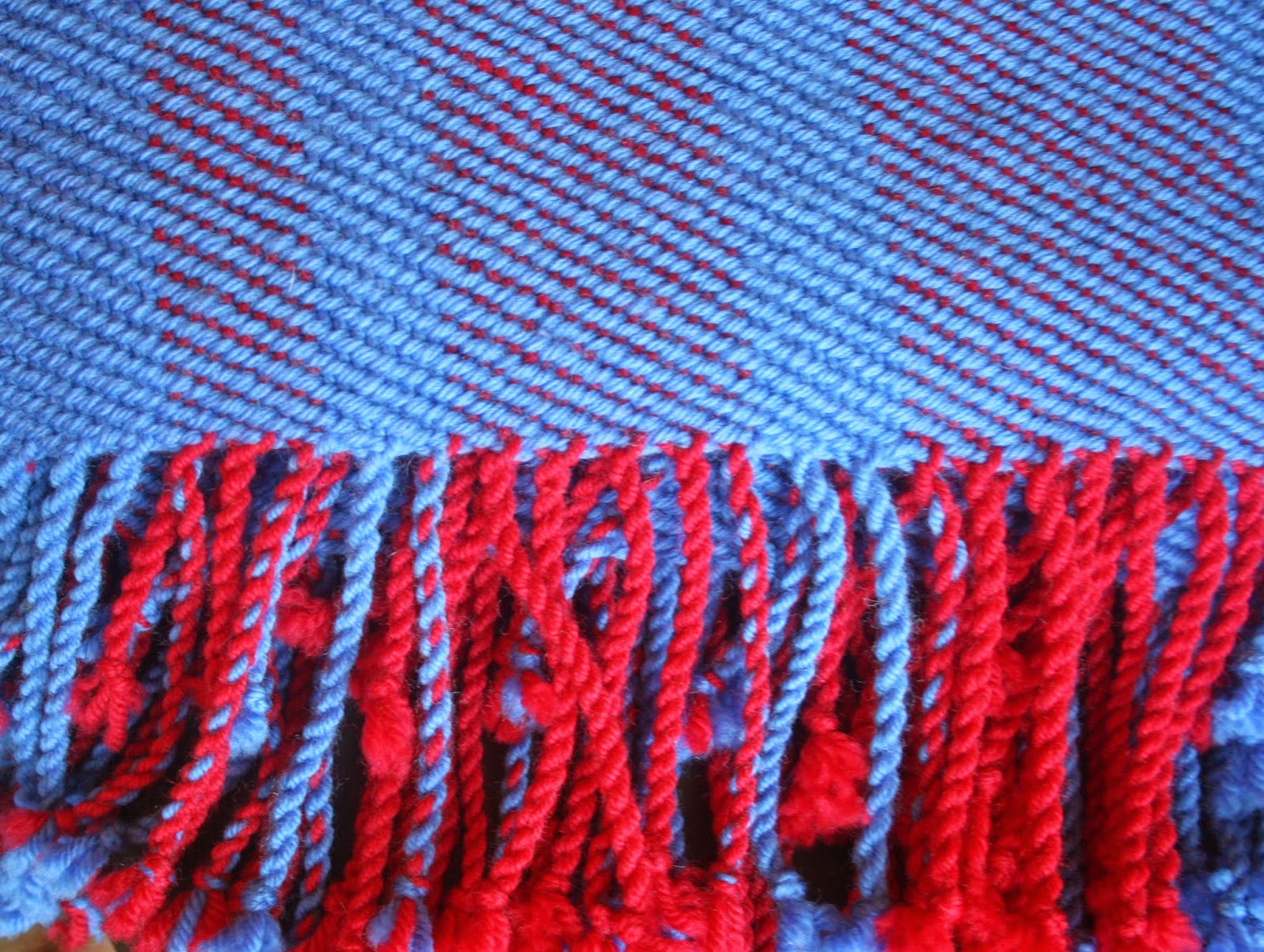 So ROCK CHALK, JAYHAWK (a tribute to my alma mater)! 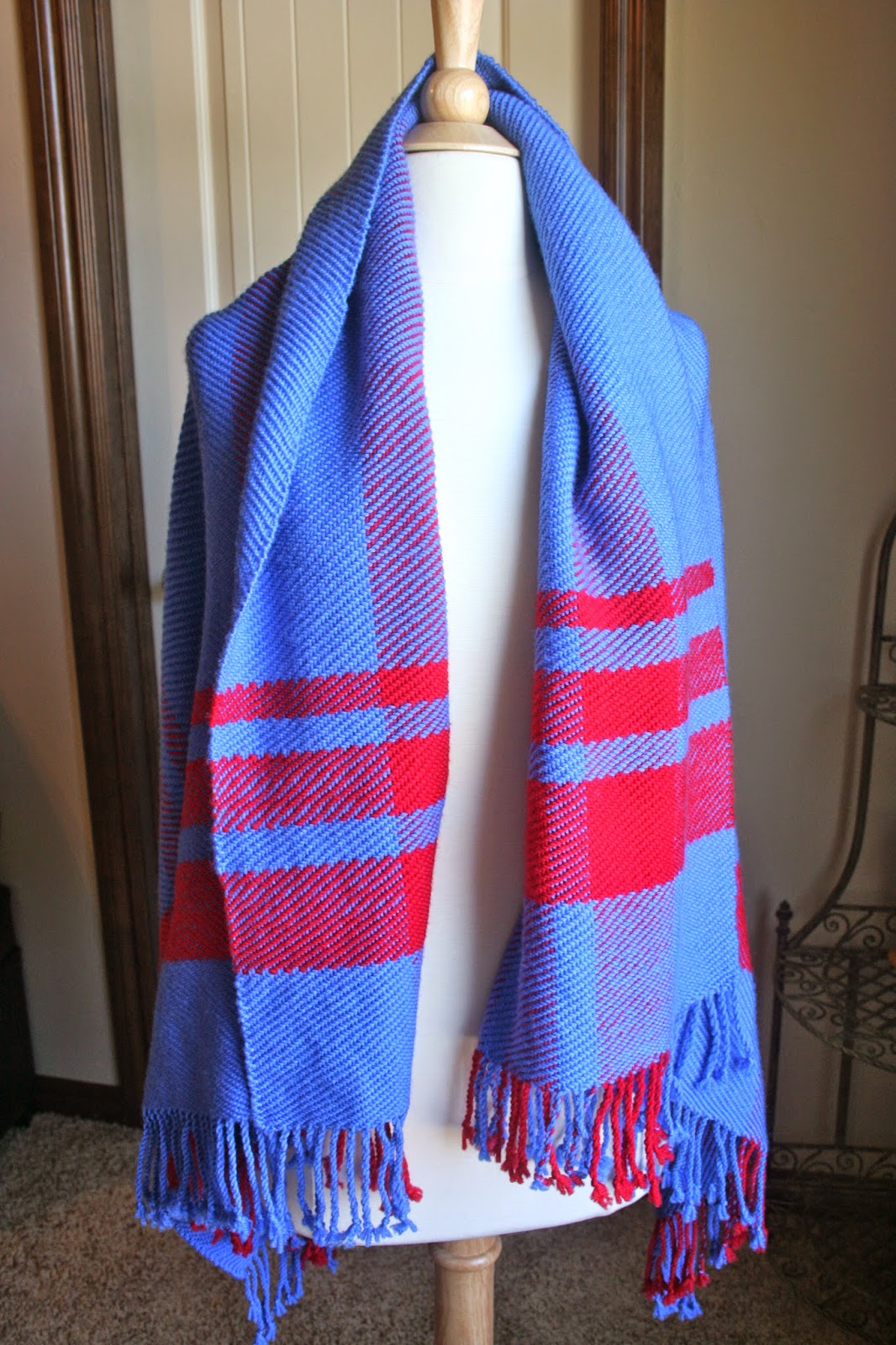 An update on current weavings:
I'm dressing my loom right now with cotton rug warp for a quick rag rug while I wait for some back ordered yarn. I'm excited to attempt my first rug! 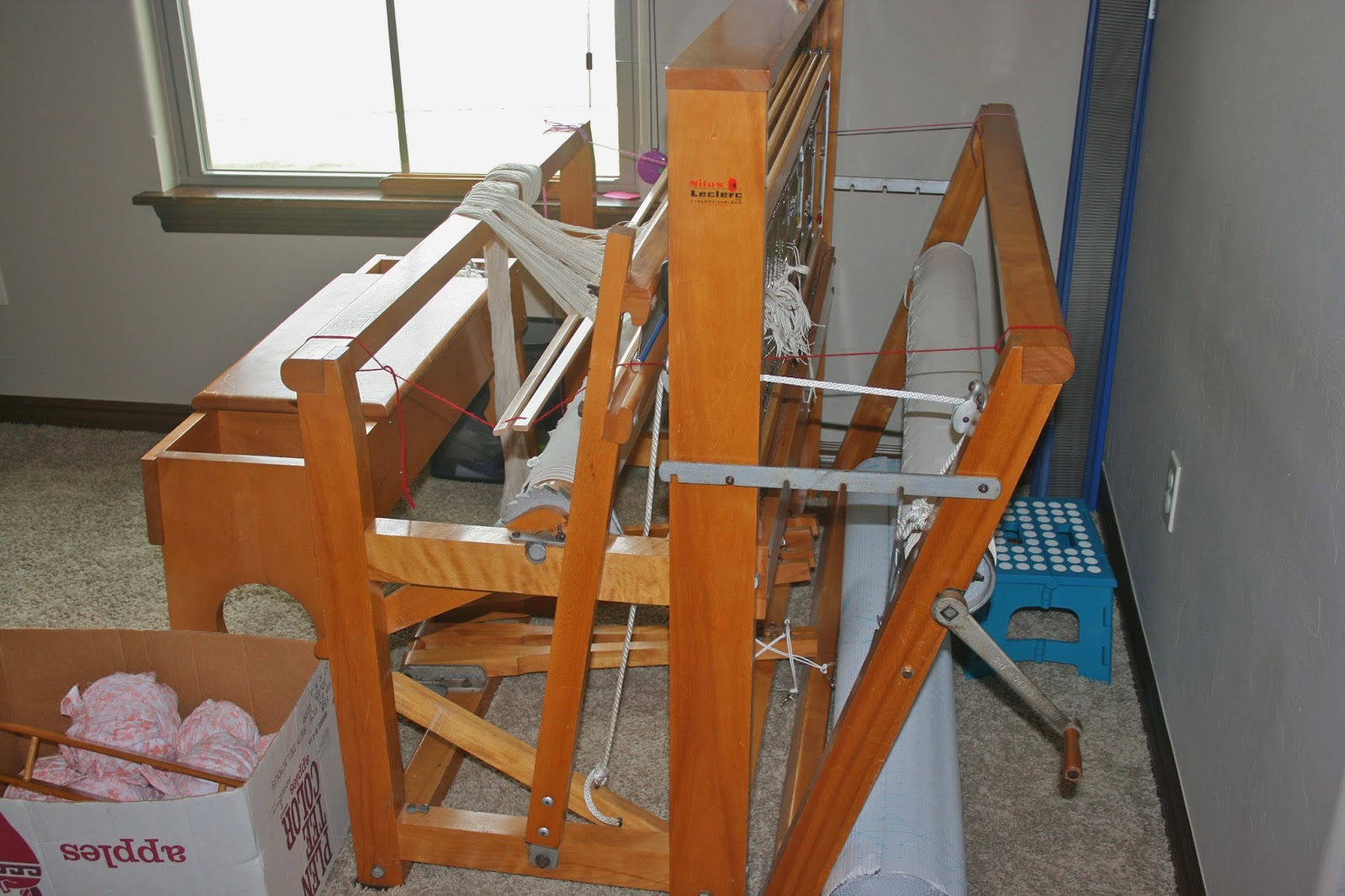 On the table loom are the placemats. I'm nearly done with the second of four. It's in doubleweave, and it's been fun doing it. I've learned that a firm beat is not possible on the table loom, so future projects that need it should be done on the big loom from now on. But I've adapted the pattern and I still think it will turn out nice. 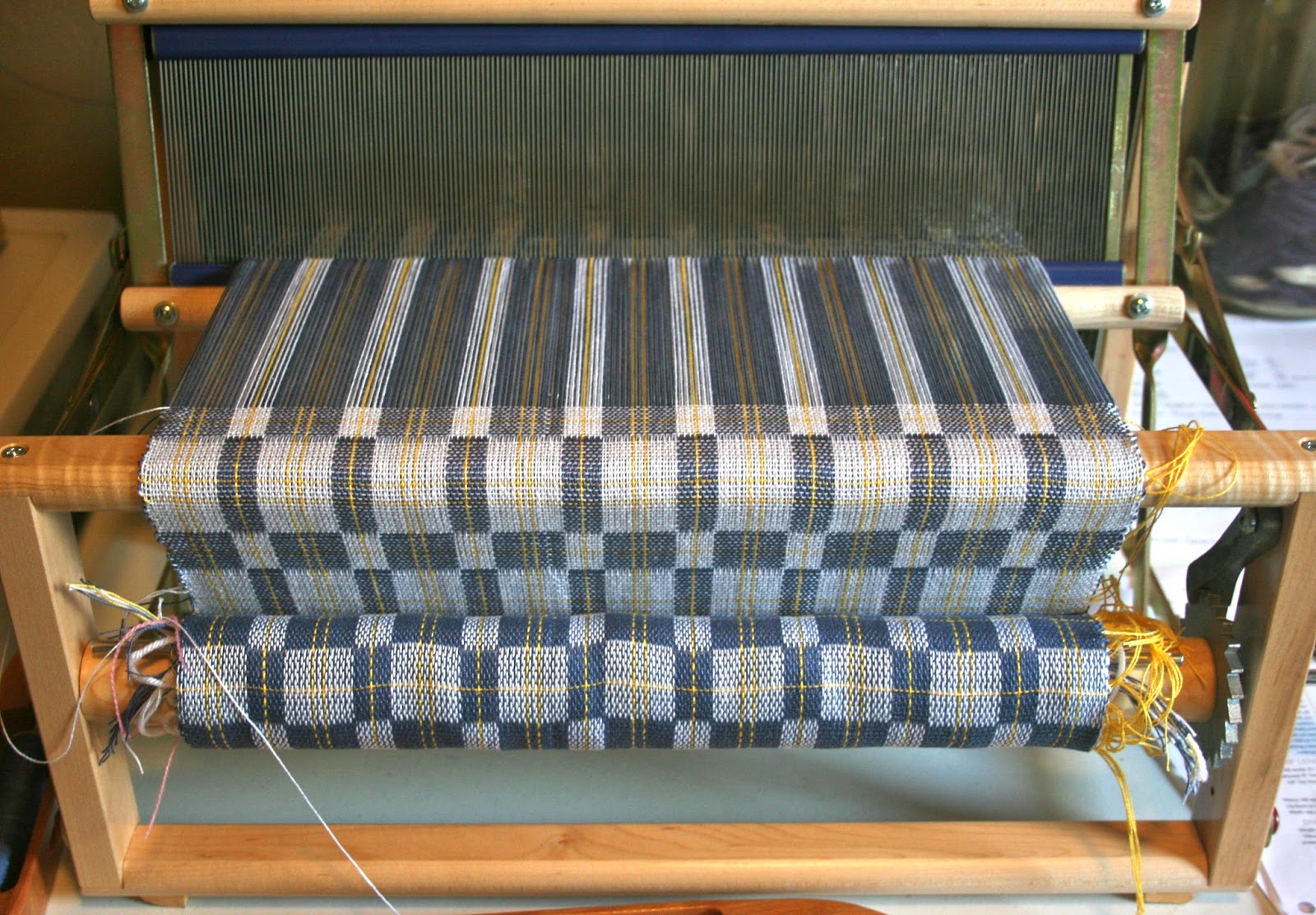 Posted by Unknown at 8:30 AM No comments:

In my world, desire to not be wasteful is the mother of invention.  In my previous post, I told you about my experience with a loose knit in stockinette stitch, and how frustrated I was with how it curled.  I realized that in certain circumstances, you WANT curling at the edges.  It makes for a nice edge if done in the right way.  With that thought flowing through my head, I realized that I had some other leftover light-weight yarn (Knit Picks Galileo from my Striped Cowl) and I decided to try another item on the same needles as the Aimee Dew Cowl.

So I began with an intentionally curling edge, and then started inventing.  I wanted the curled edge to stand out, so I made the edge a border in a different color.  I put a purl ridge on each side of the middle panel to help it lay flat. 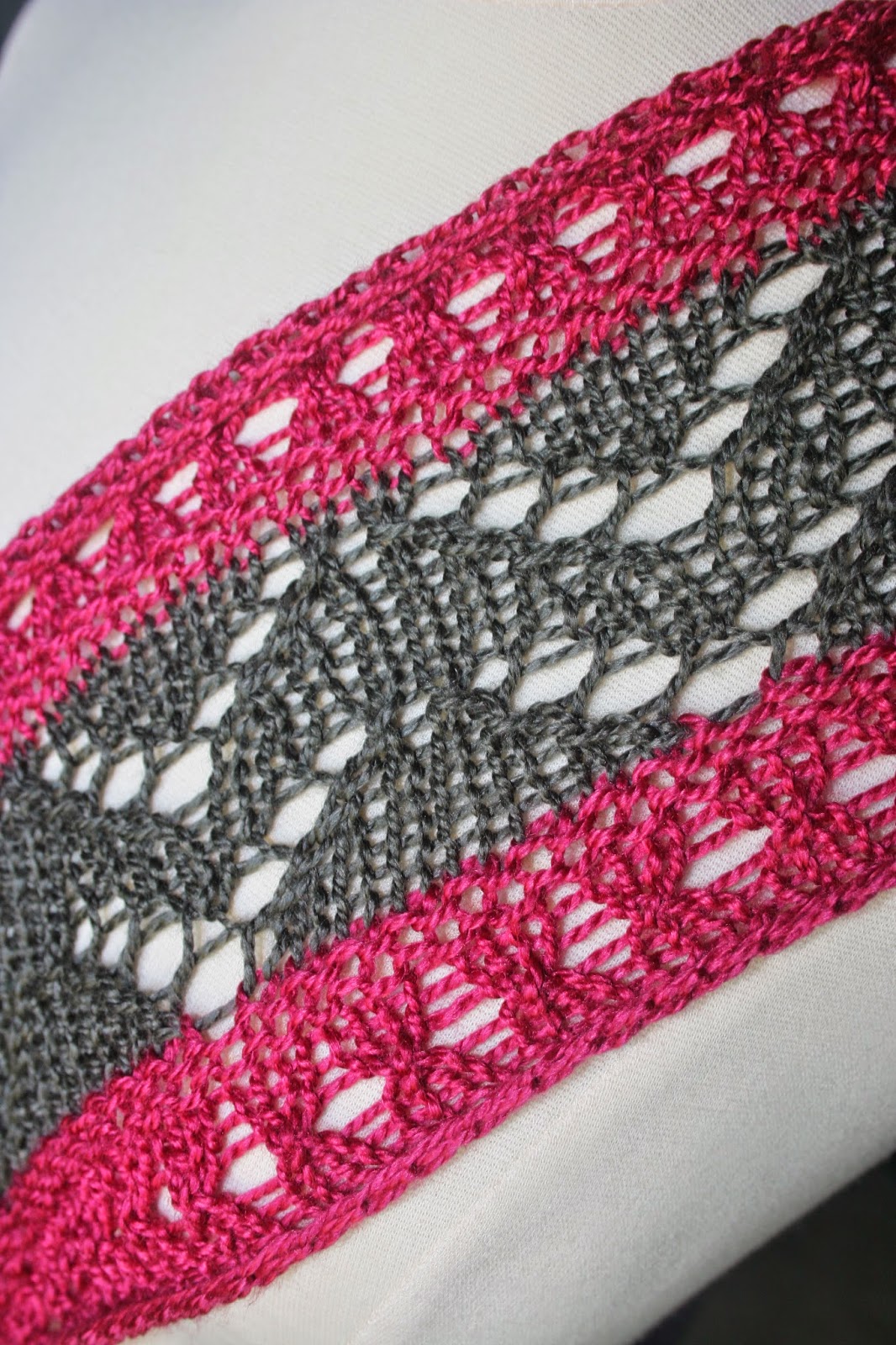 Then I inserted a panel of chevrons in the middle, and finished with an identical border. 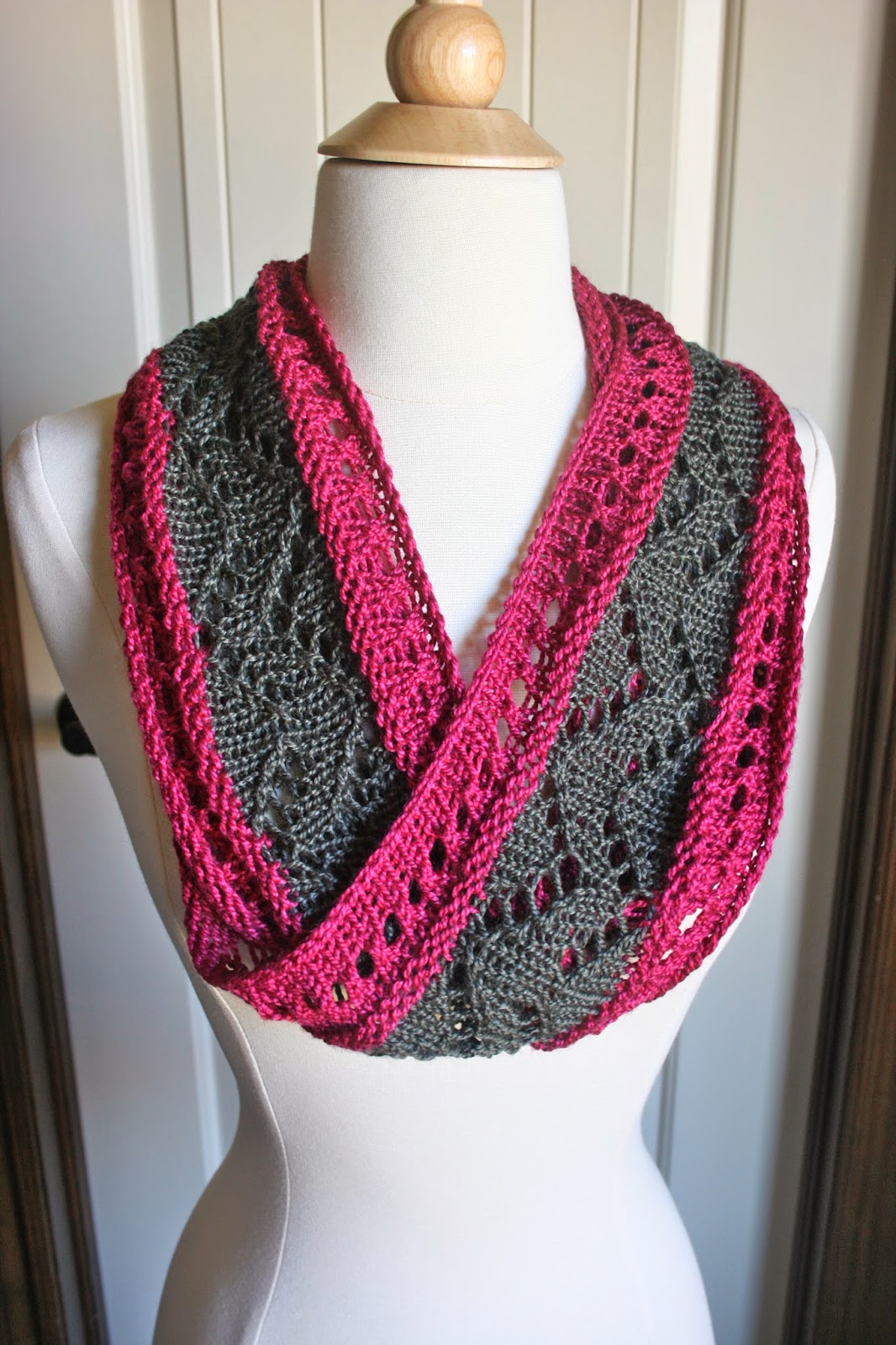 It's a fun, eye-catching accessory.  I really fussed with the edges in some of the pictures, it really curls on the edges more than it appears. 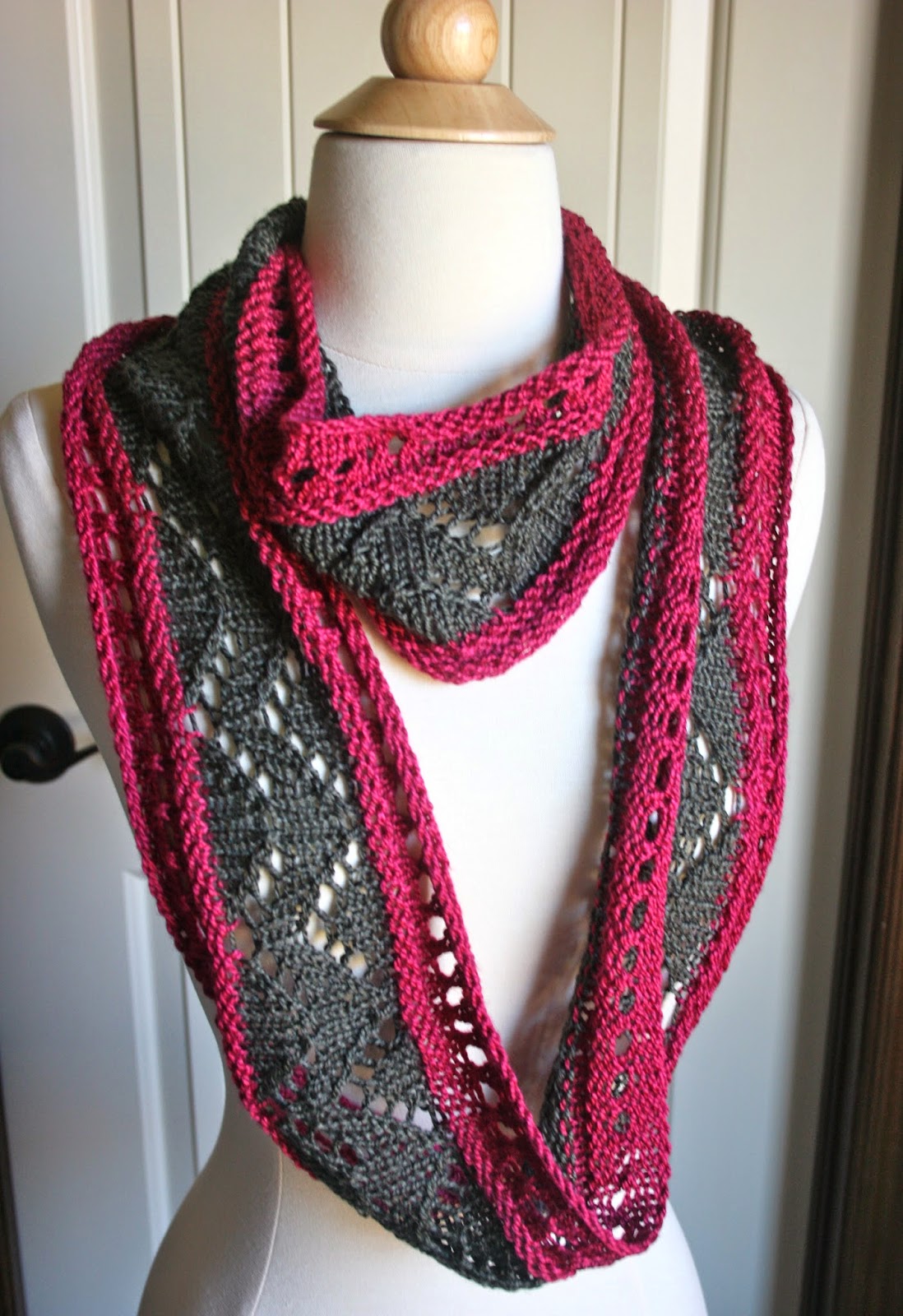 The pink really gives it a pop of color. 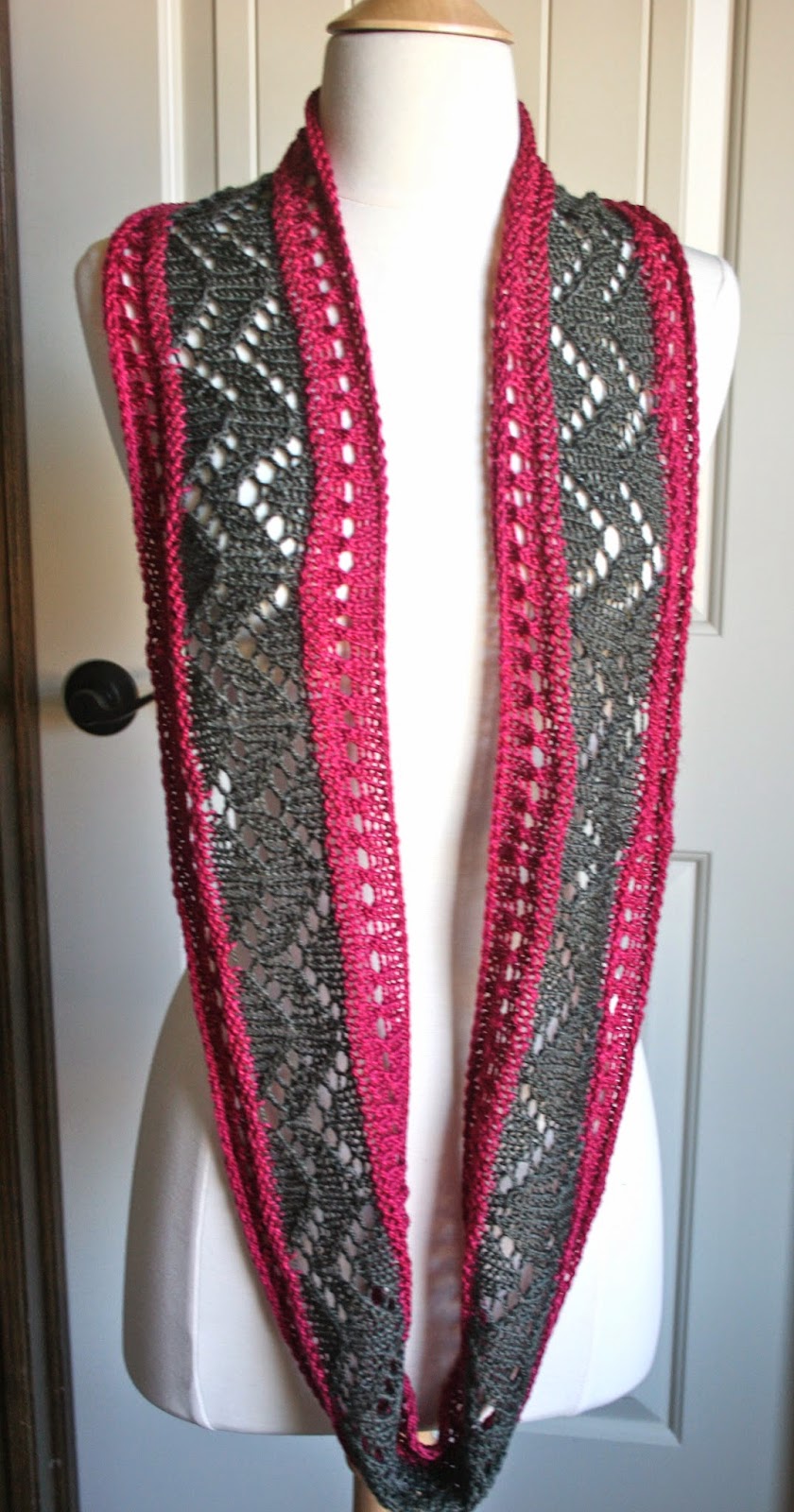 It took me only about 4 hours to knit this one (similar to the Aimee cowl), and it was fun to use my brain and figure it out!

Here is the pattern:

Weave in the ends, block and enjoy!

I have listed this as a FREE pattern in Ravelry!  Make sure you post pictures when you complete it so I can see your handiwork!
Posted by Unknown at 9:00 AM 4 comments:

More than a year ago, I made a beach pullover with this beautiful yarn: Louisa Harding Yarns Aimee. 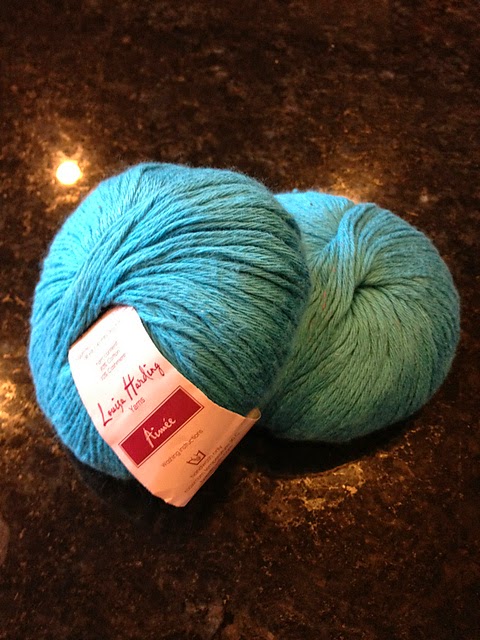 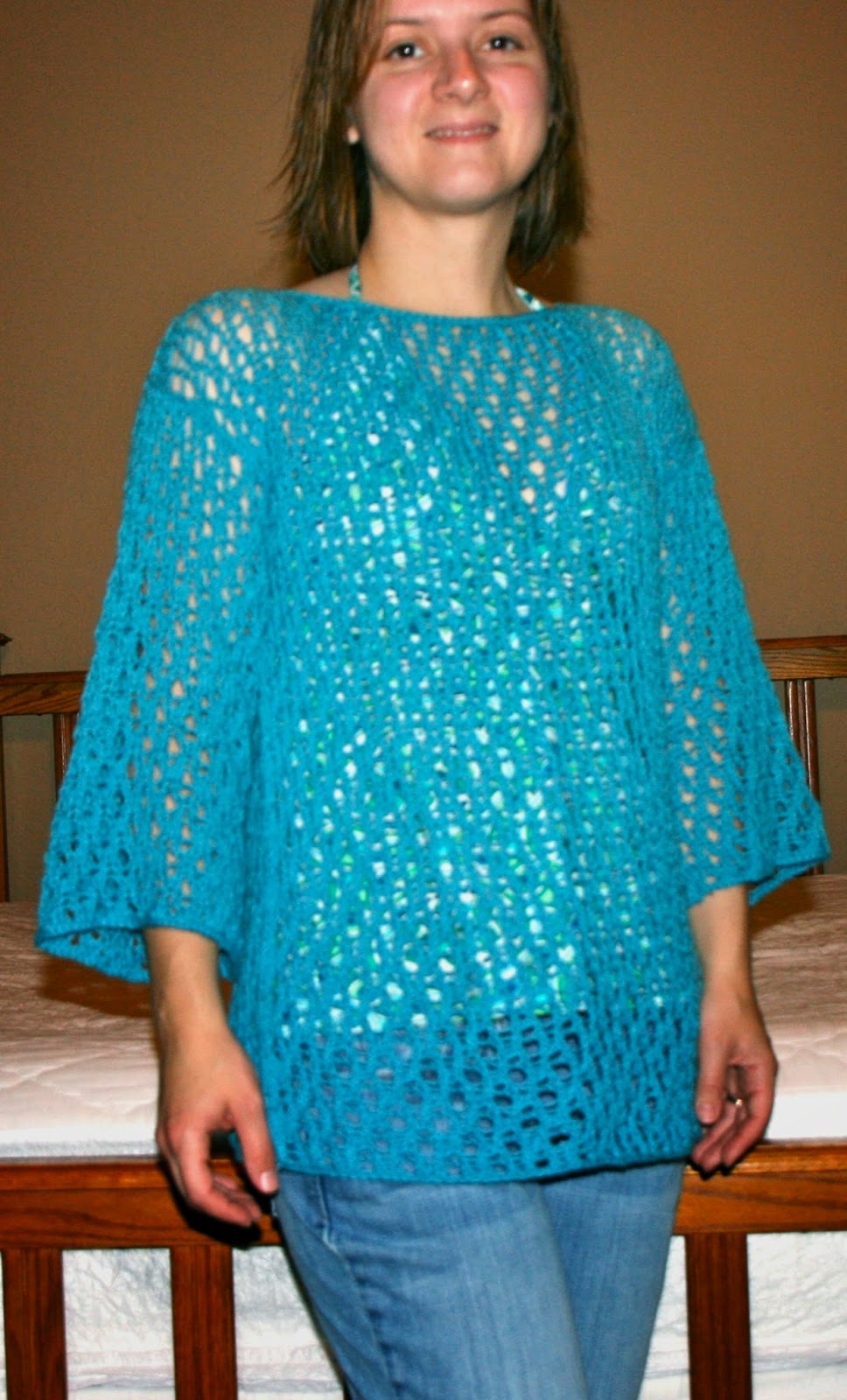 It is a blend of cotton and cashmere and is SOOOOOooooo soft.  I had 2 skeins leftover from that project, and I found this pattern to try.  This DK weight yarn on size 10 needles resulted in a really loose knit.  I was so happy with the result...until I removed the blocking pins.  This pattern utilized mostly stockinette stitch, and was supposed to be blocked aggressively to open up the eyelets. 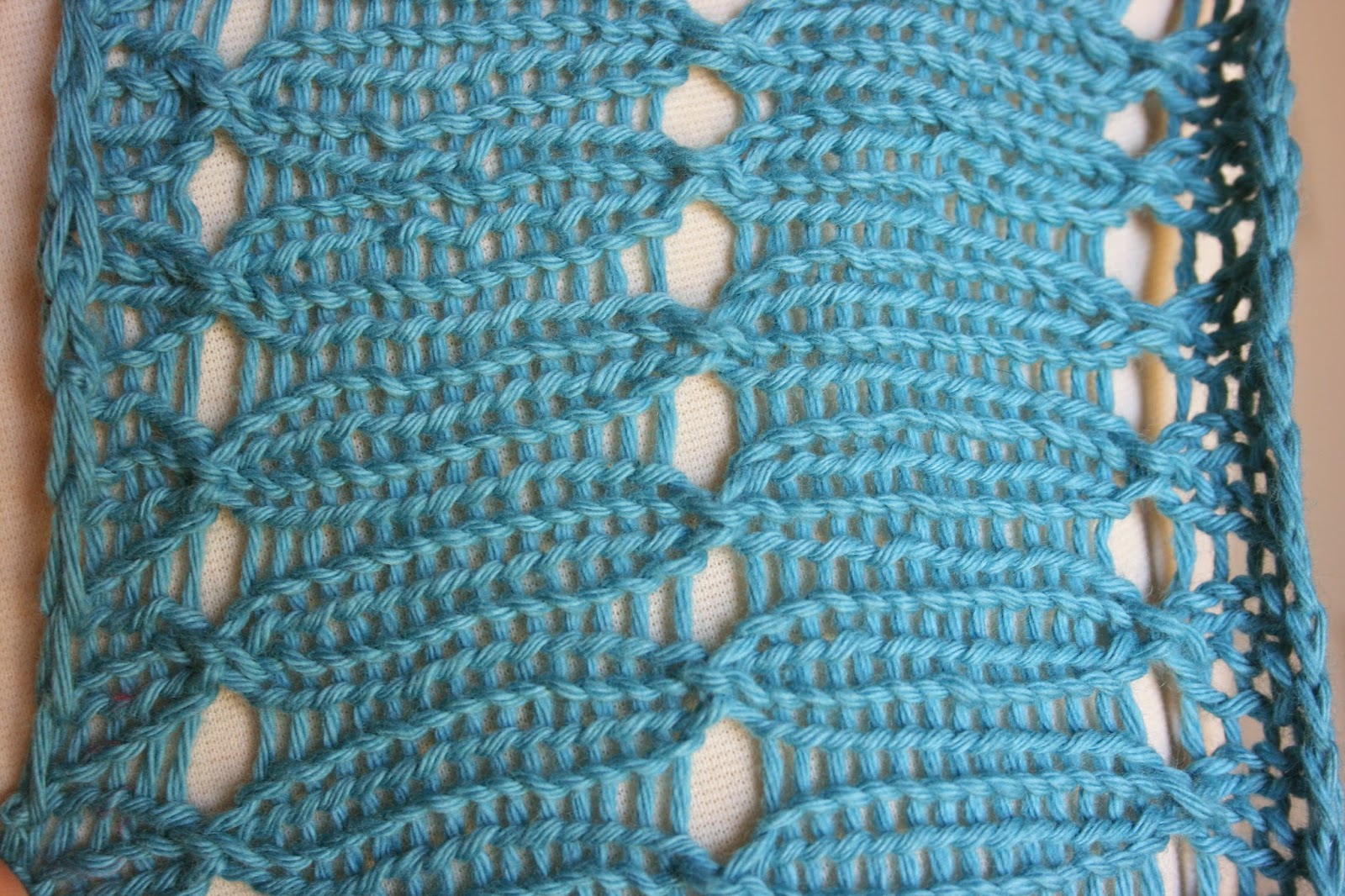 Well, when you do that, especially with a yarn that is not firm and has plenty of drape, you get curling.  Nevertheless, I am pleased with the result - mostly because it feels like butter. 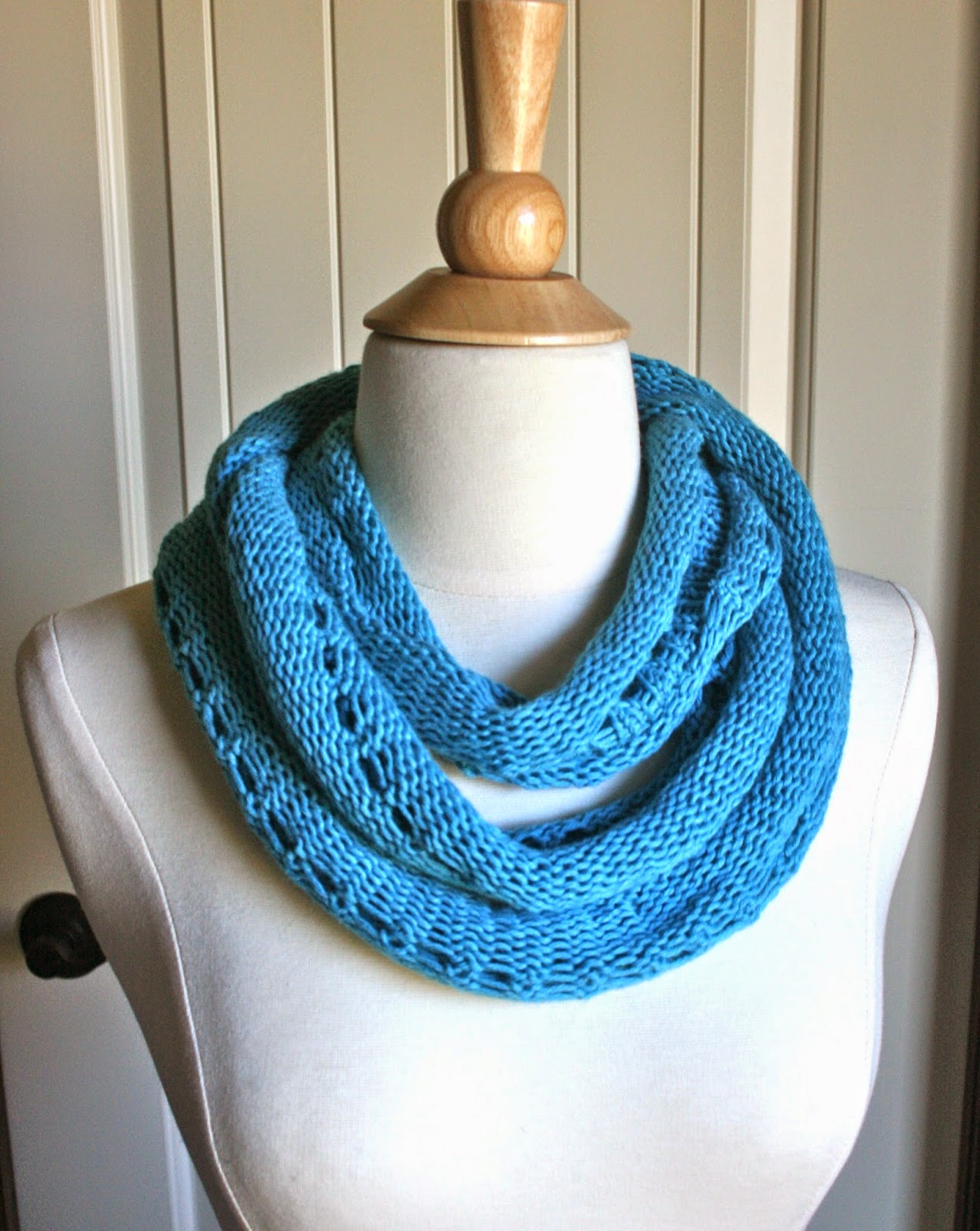 This was a quick knit, only took about 4 hours, and I think it'll be a great accessory in the bright blue color.  Reminds me of the beautiful color of the ocean at St. Croix (where I wore the beach pullover I made with the rest of the yarn). 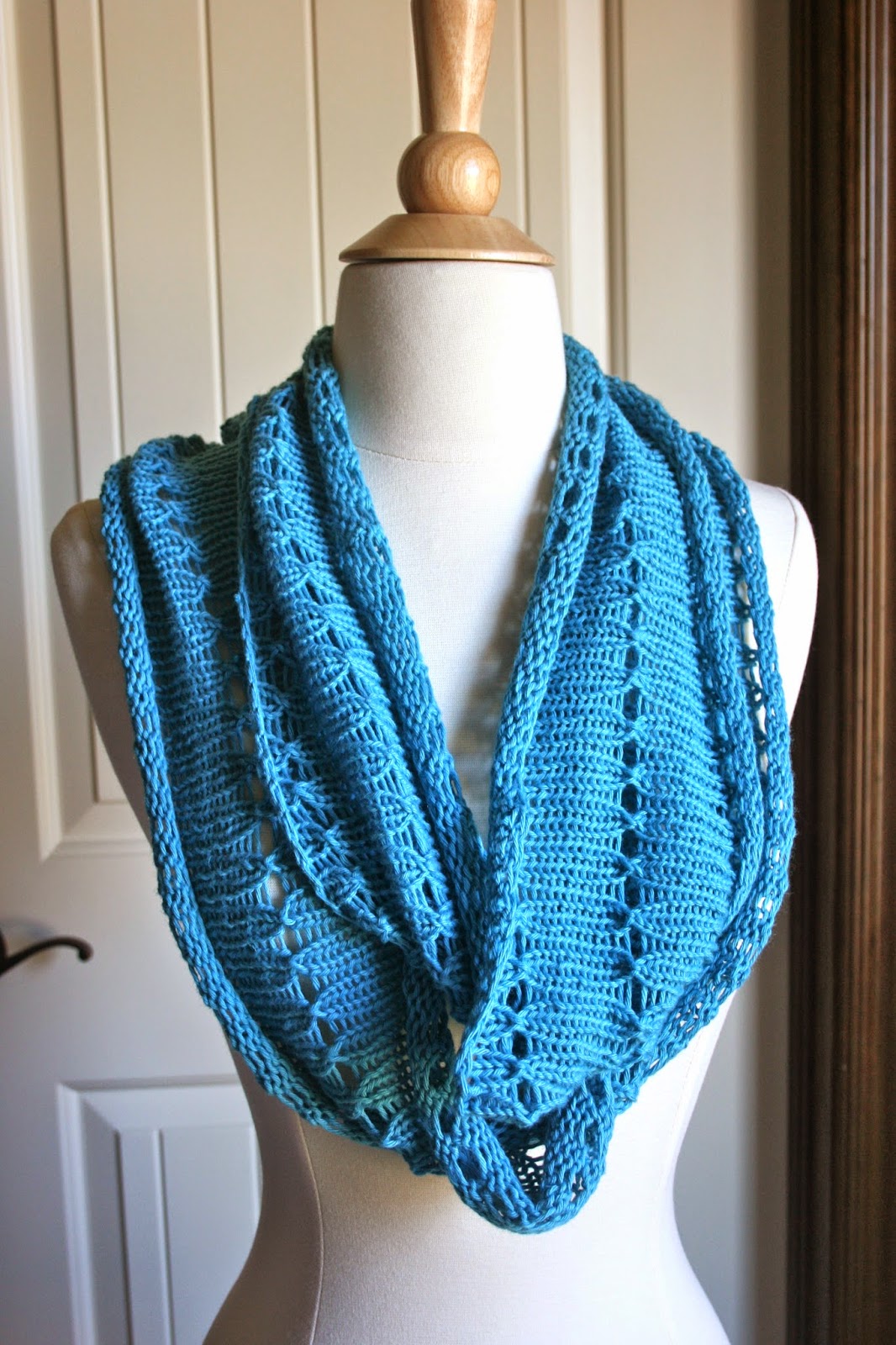 This cowl makes me think of summer!  Come on warm weather!
Posted by Unknown at 9:44 AM No comments: