As I've mentioned, we are going on a road trip to Durango, Colorado next week.  I have been slowly gathering things for the 12+ hour drive for the last few months.  When I sat down to think of things to have to help keep the kids entertained, I came across this page describing a jar of pipe cleaners she gave to her kids to help teach them about the science of magnets.

I took it a step farther.

First I found a nice plastic container.  Now in my family, we eat nuts like there's no tomorrow.  It's not unheard of for me to buy 8-10 of them when there's a good sale.  So when we empty one, I take the labels off and stash them in my craft closet.  They're really handy for all sorts of stuff.

So I have 2 Planters peanut jars, next I went and found a variety of metallic items.  I let the boys pick 3 colors of pipe cleaners, and cut them into small bits like the example above.  Then I found other magnetic things, like paper clips, bobby pins, spare screws and nuts, and a few other miscellaneous items. 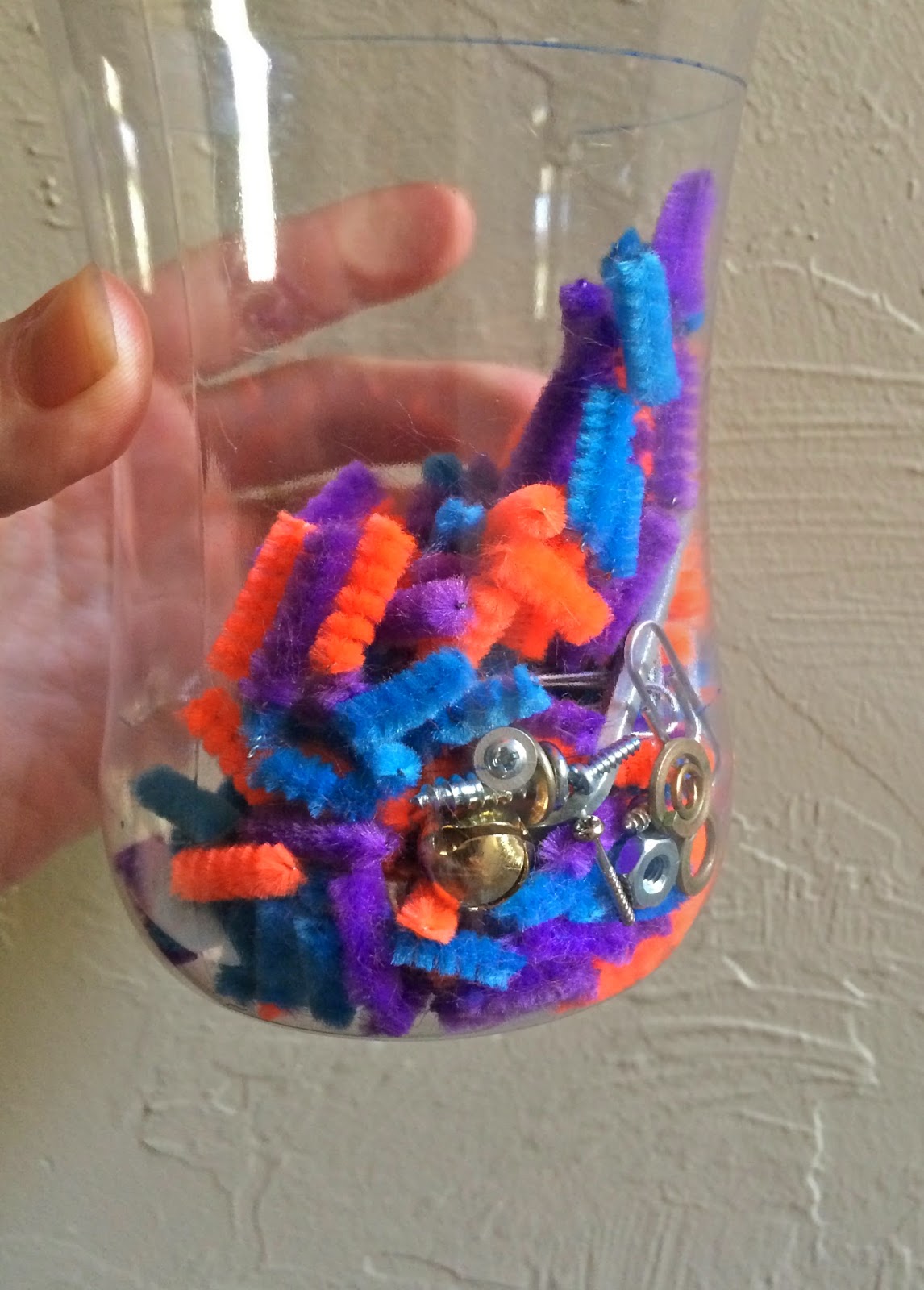 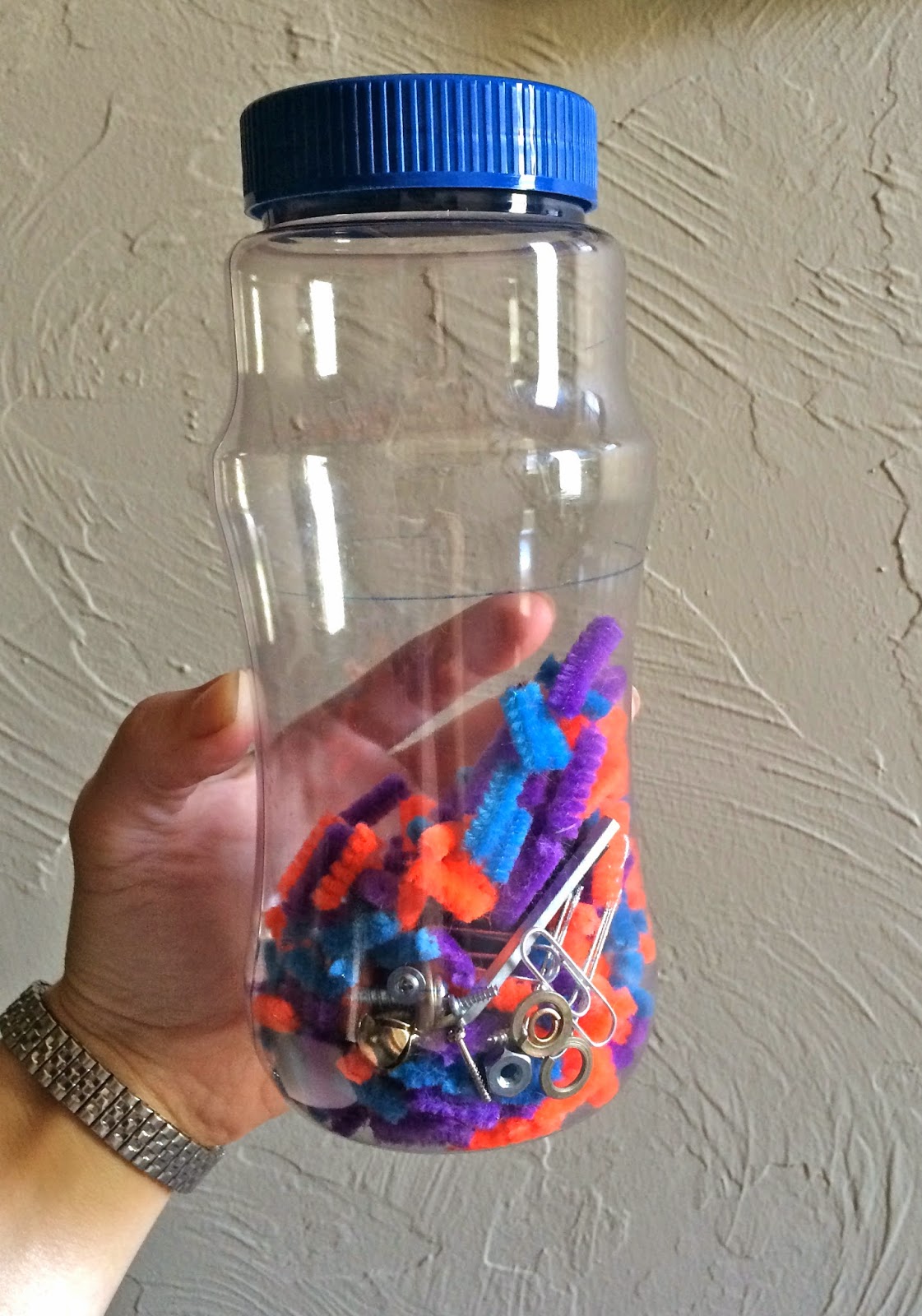 Once I added all the items, I hot-glued the lid on so we wouldn't have bits all over the car floor.  Next, I hot-glued a magnet to a large Popsicle stick so the kids can move things around and see how it affects the contents of the jar.  Here is a photo of my son making the items crawl up the side of the jar. 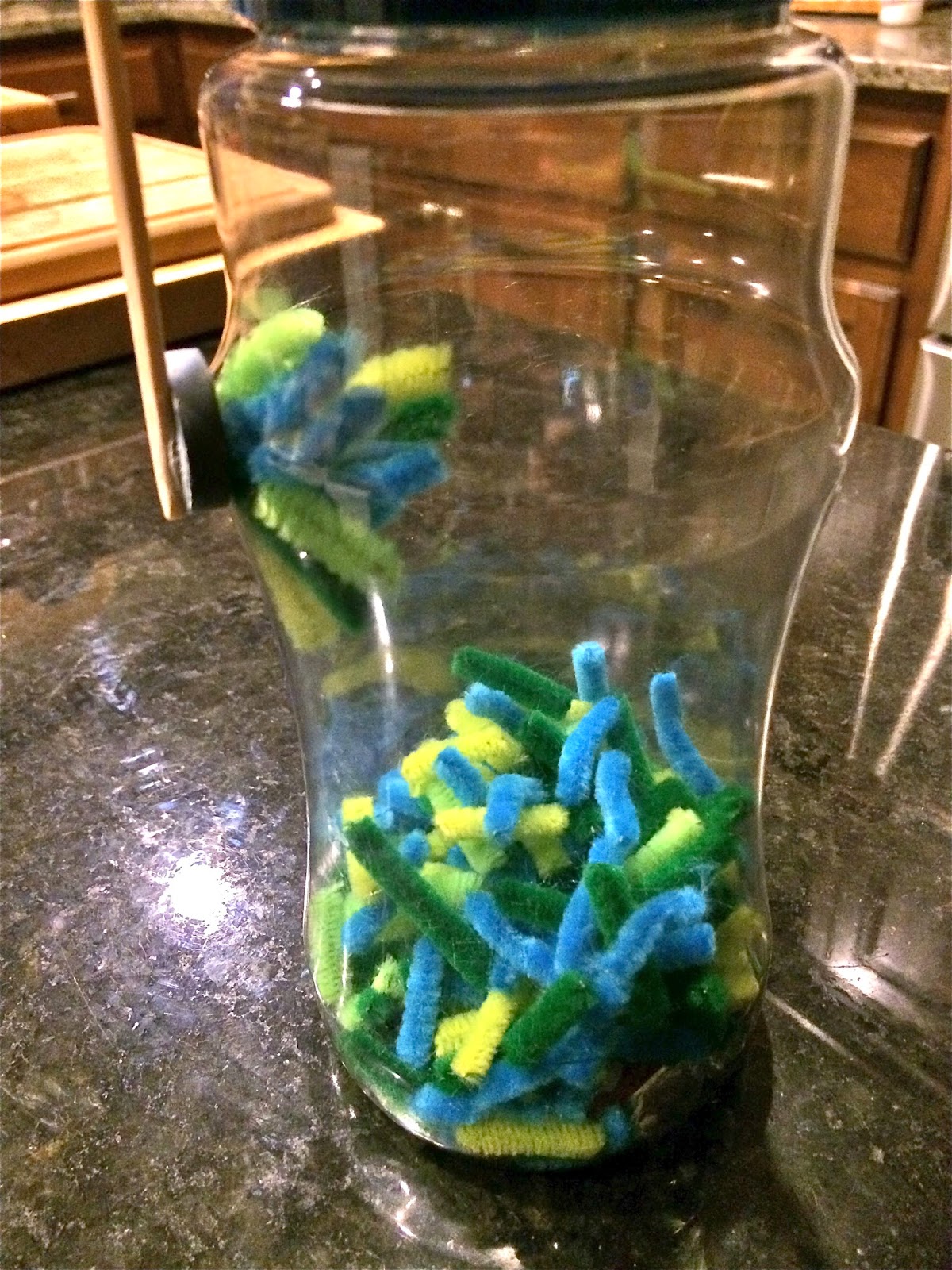 And across the bottom. 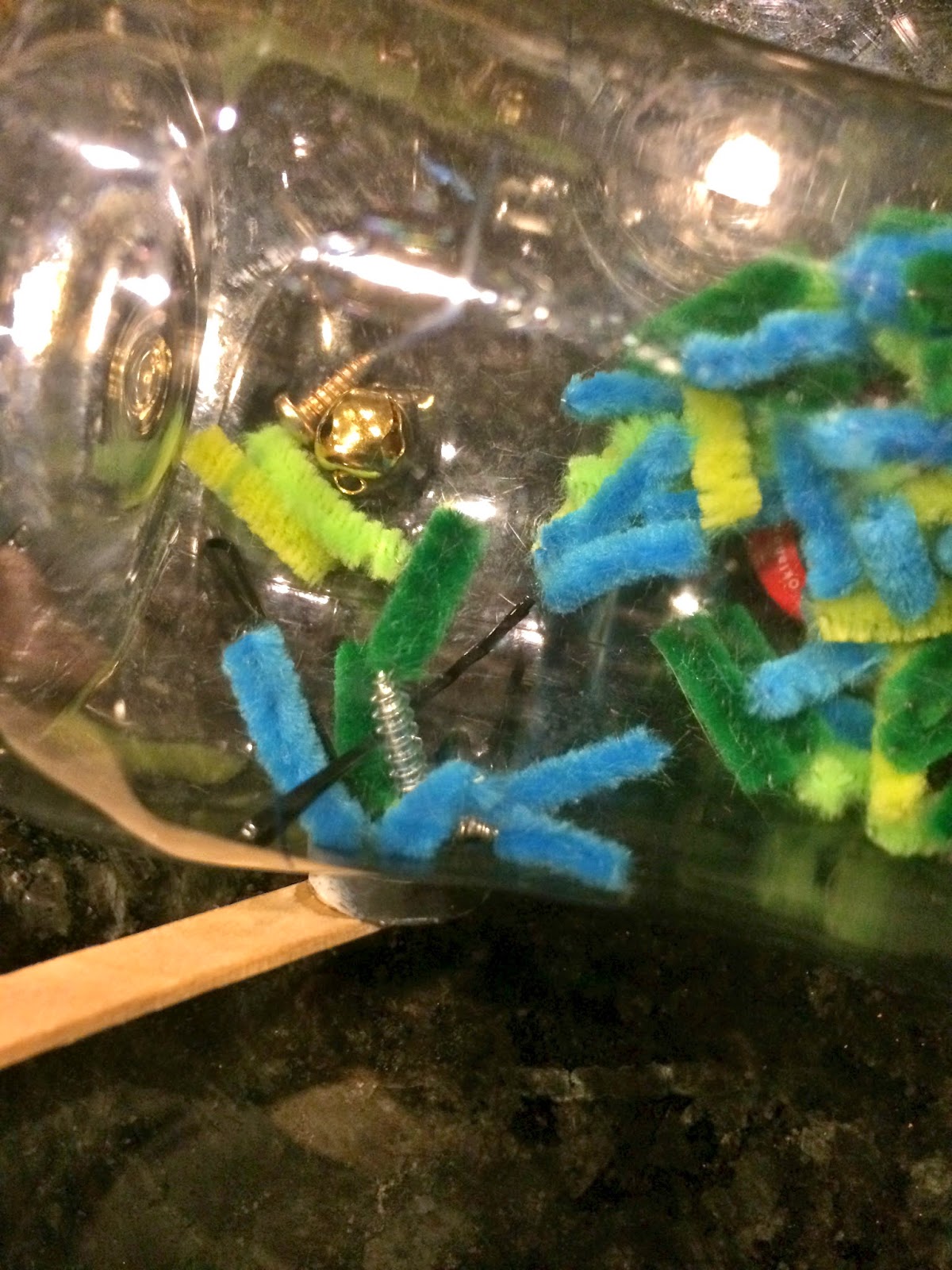 He played with it for several hours before I confiscated it to put away for the trip.  It'll lose it's novelty if they keep playing with it until then.  One of those things mommys learn along the way!

As it gets closer, I get more and more excited and less concerned about how the boys will do.  Vacations are supposed to be fun and as long as you expect some rough patches and plan accordingly (with frequent stops and distractions), it'll work out fine!
Posted by Unknown at 9:00 AM No comments:

Email ThisBlogThis!Share to TwitterShare to FacebookShare to Pinterest
Labels: Craft

It's been a great summer so far.  The weather hasn't been to hot, we've had a lot of rain, the boys are loving playing outside, and we have had (and still have upcoming) great vacations this year.  We spent a week at Tablerock Lake/Branson with my family, and we are planning on leaving next week for a week in Durango, Colorado.  I'm excited.  The boys ride well in the car these days, and are nearly both potty trained - which helps a lot.  I'm sure vacations from this point on will be a lot of fun!

I've not posted in a while, but that doesn't mean I haven't been busy with fiber.  A quick update: I have the cream and blue kitchen towels on my largest loom: 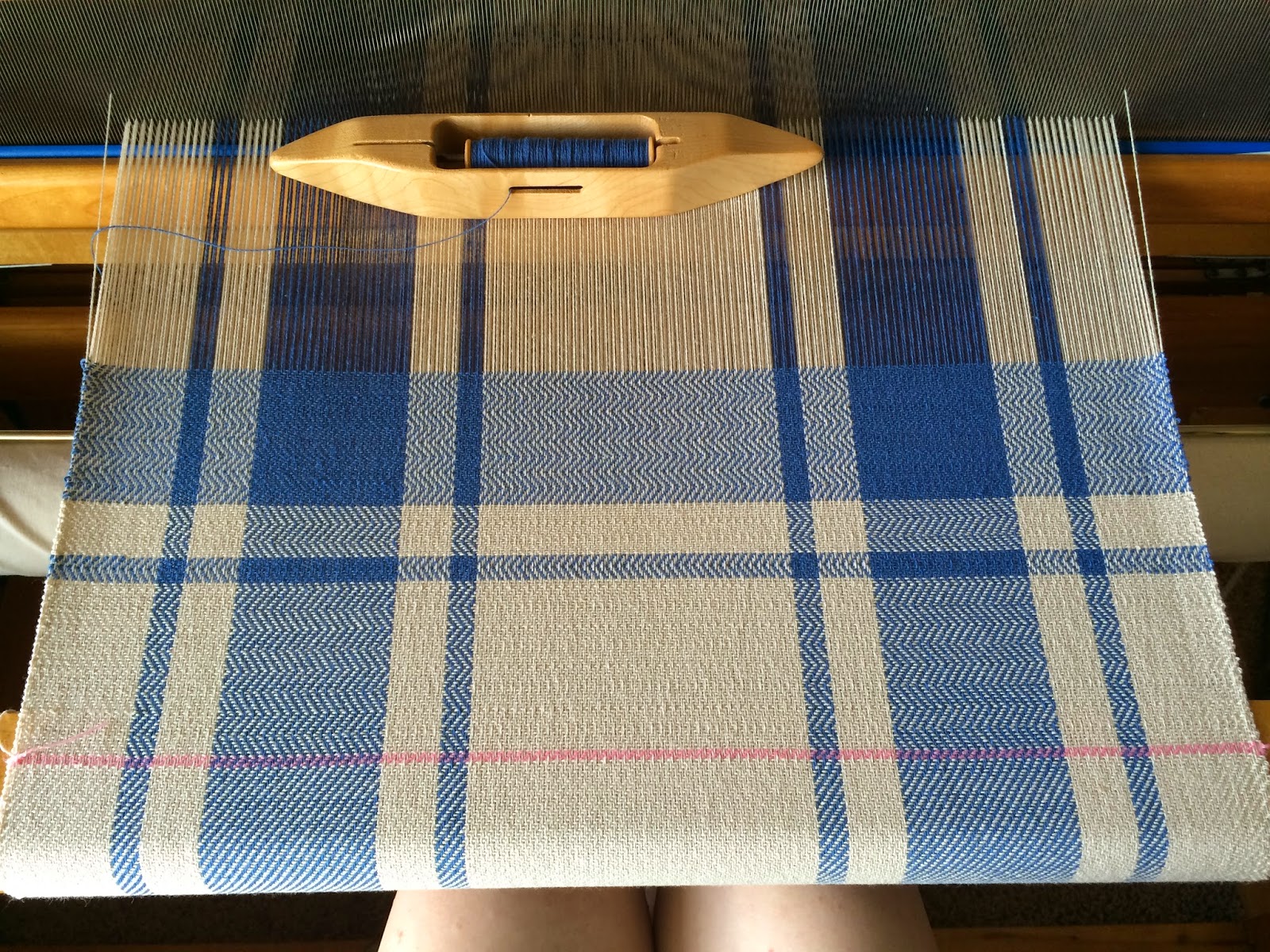 I'm over half way done with the second towel.  The pink line seen is my cutting line, where I will machine sew the end of the towels on either side and then cut them apart.  Each towel will have the same coloring but has a different treadling pattern.  The first towel was plain 'ole twill.  The second one is an extended zig zag.  Here is a close up of the design: 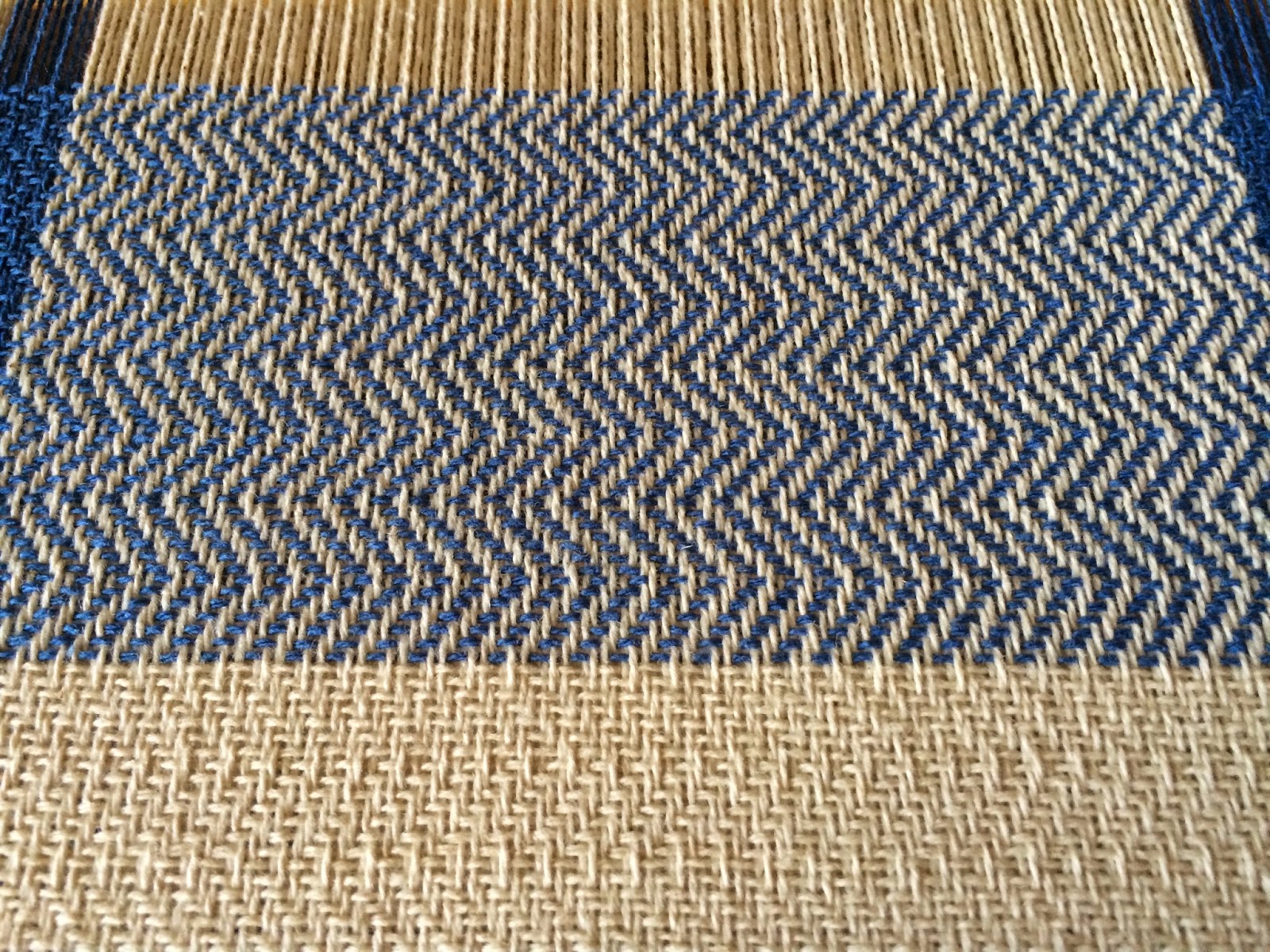 Although my kids bug the tar out of me when I'm trying to weave - touching this and that and walking off with my tools, I really love weaving and hope as they get older I will be able to devote more time to it.  It's so satisfying to spend an hour at the loom and end up with 10 inches of fabric, even at small gauge.  Much different than knitting in that way.


I have finished 3 projects to share with you in knitting.  They were each quick things that I finished.  First up is my Hat in Pinks. 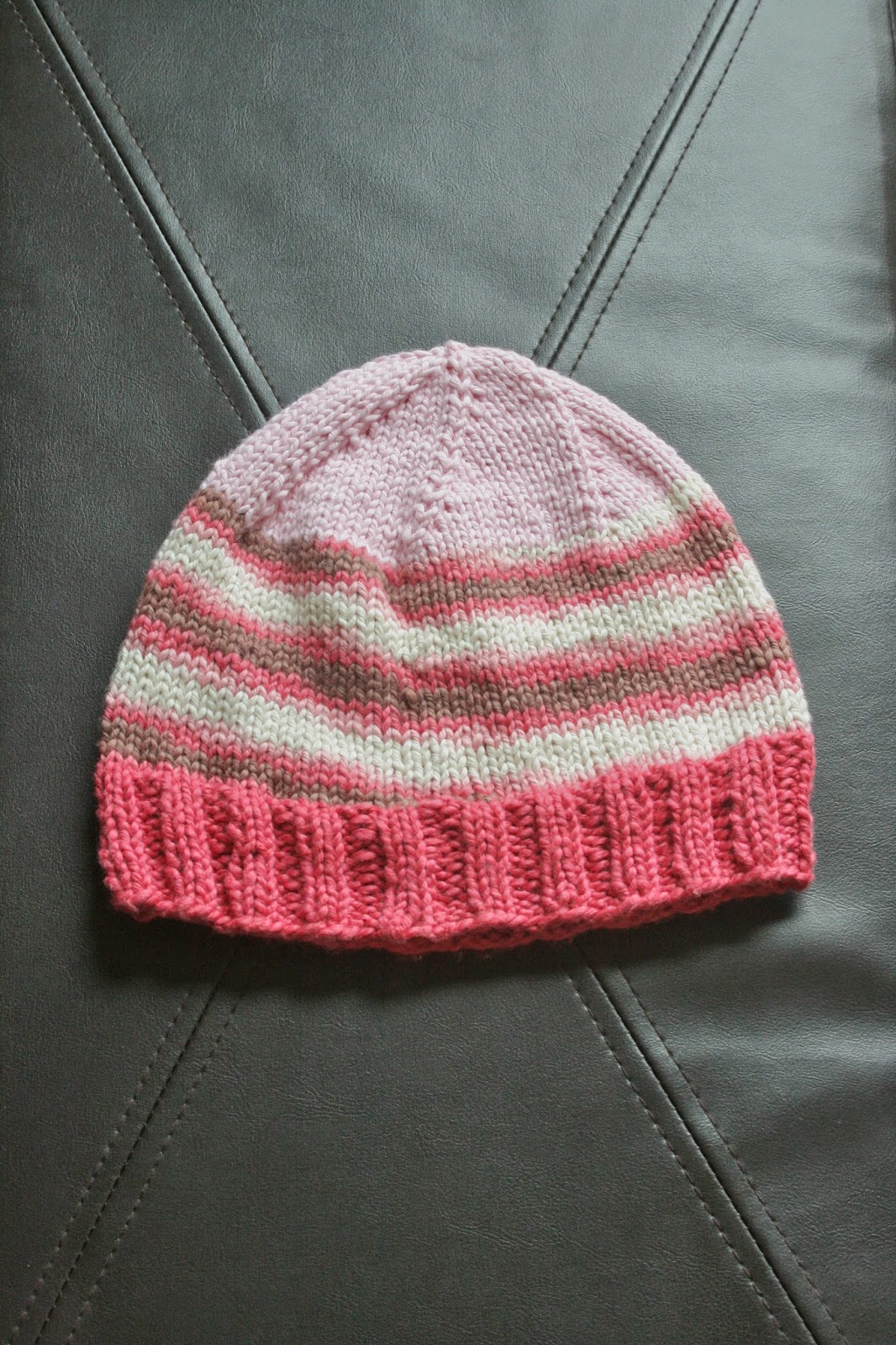 This yarn is some that I've had for forever, three partial skeins, and I finally just made a simple hat with them.  Bernat Cottontots in 3 pink colors.  It is a discontinued line, which is sad, because I like the yarn a lot.  It is really soft and easy to work with.  I really like how the variegated yarn created stripes in the middle section.

Next up is a wine bottle cozy.  The idea for this arose out of our summertime Sunday evening Twilight Concert series in the park that we like to go to.

We began going 3 years ago with our neighbors, and it became imperative (*wink, wink*) to bring a bottle of wine along.  Now tell me how, exactly, we should carry a bottle of wine and glasses to the park along with blankets, snacks, strollers, sippy cups and the like WITHOUT breaking the bottle??  So as a crafter will do, I picked up some Alpaca Love, Stitch Nation by Debbie Stroller, and started in. 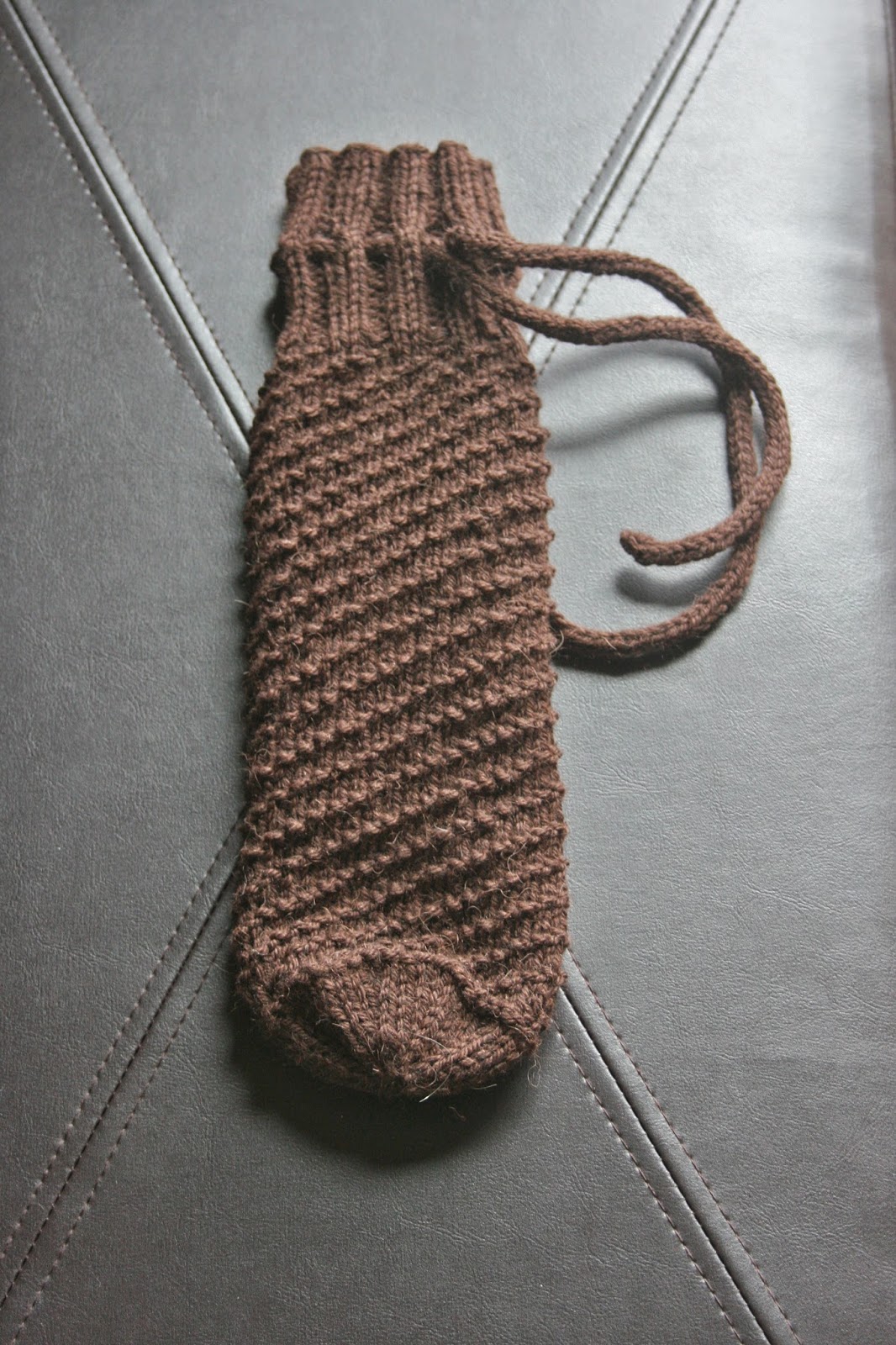 This was fun to knit, quick, and easy.  All you got to do is slide in your wine of choice and tie it to snug in down, and you have wool and alpaca keeping that wine cold and protected.  Very important.  :) 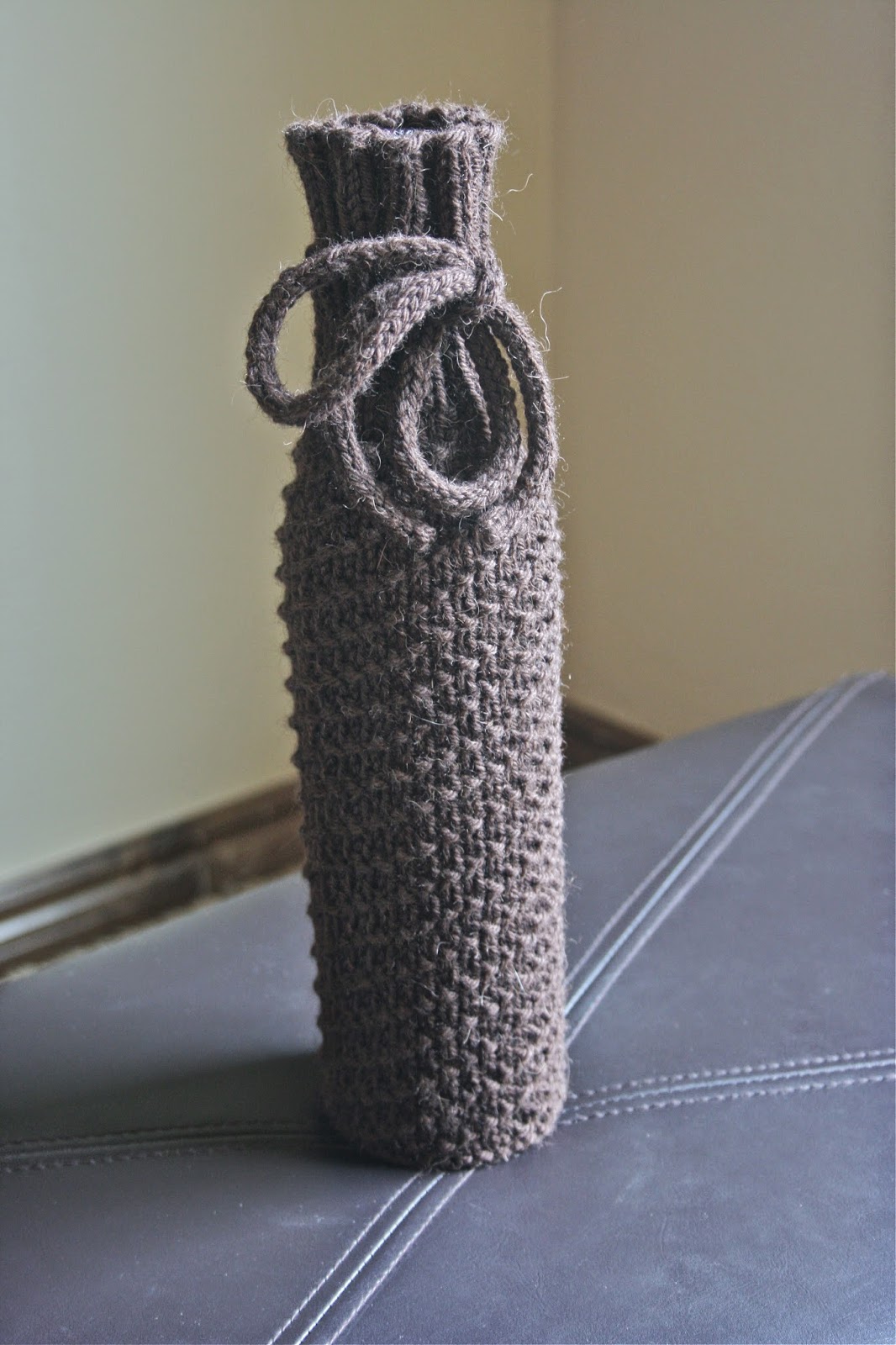 It's knit in the round with a spiral pattern. 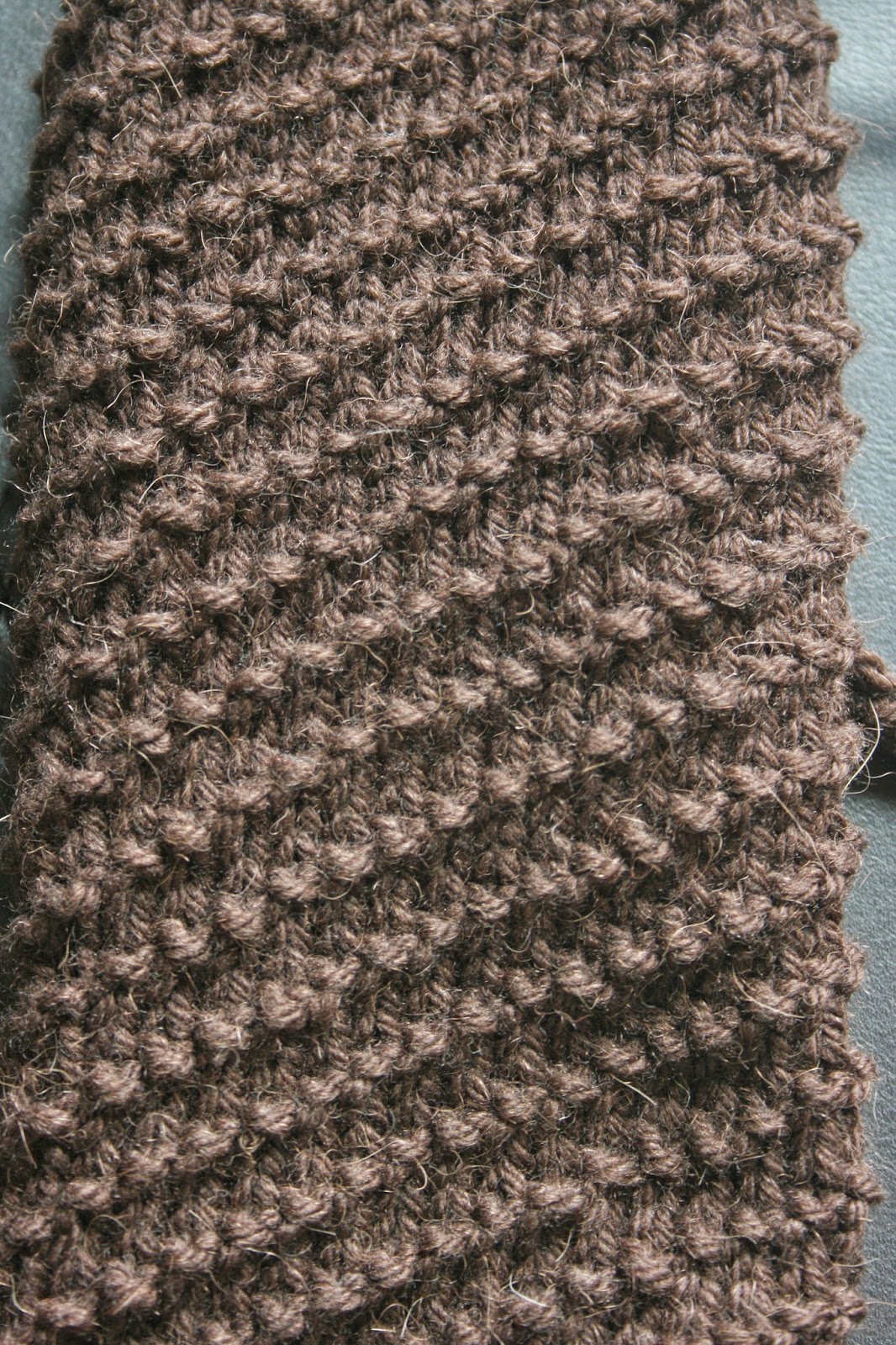 So now my wine bottles are safe when I'm going to music in the park.  Horray!

Last, is my Knotty Gloves.  I really like these.  This is Berroco Sox.  If you ever need a great, sturdy, warm sock yarn, this is it.  I made my dad a pair of simple wool socks from this same yarn and color, and he wears them all the time.  But I went outside the box and decided to make a pair of gloves with the second skein I bought. 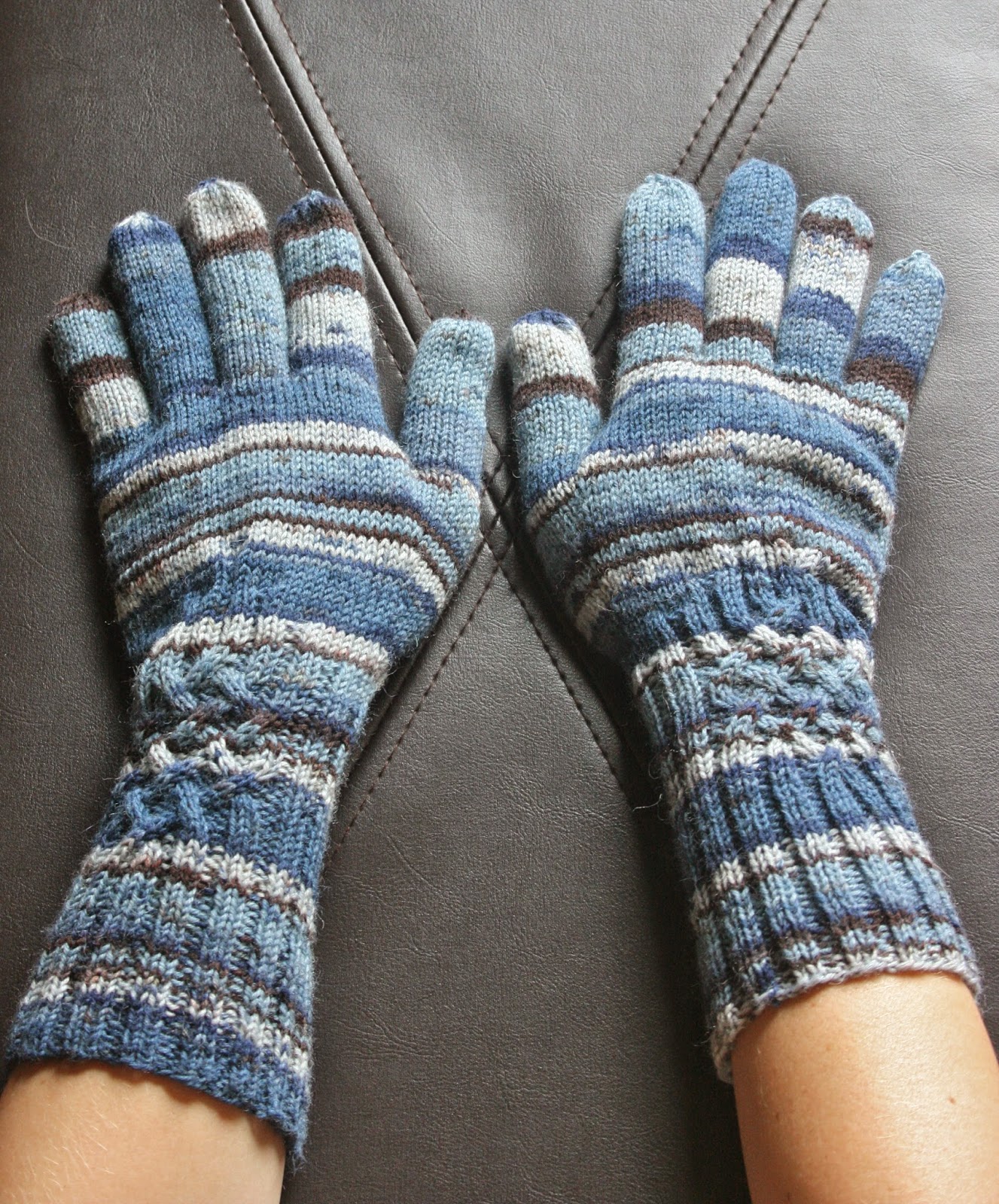 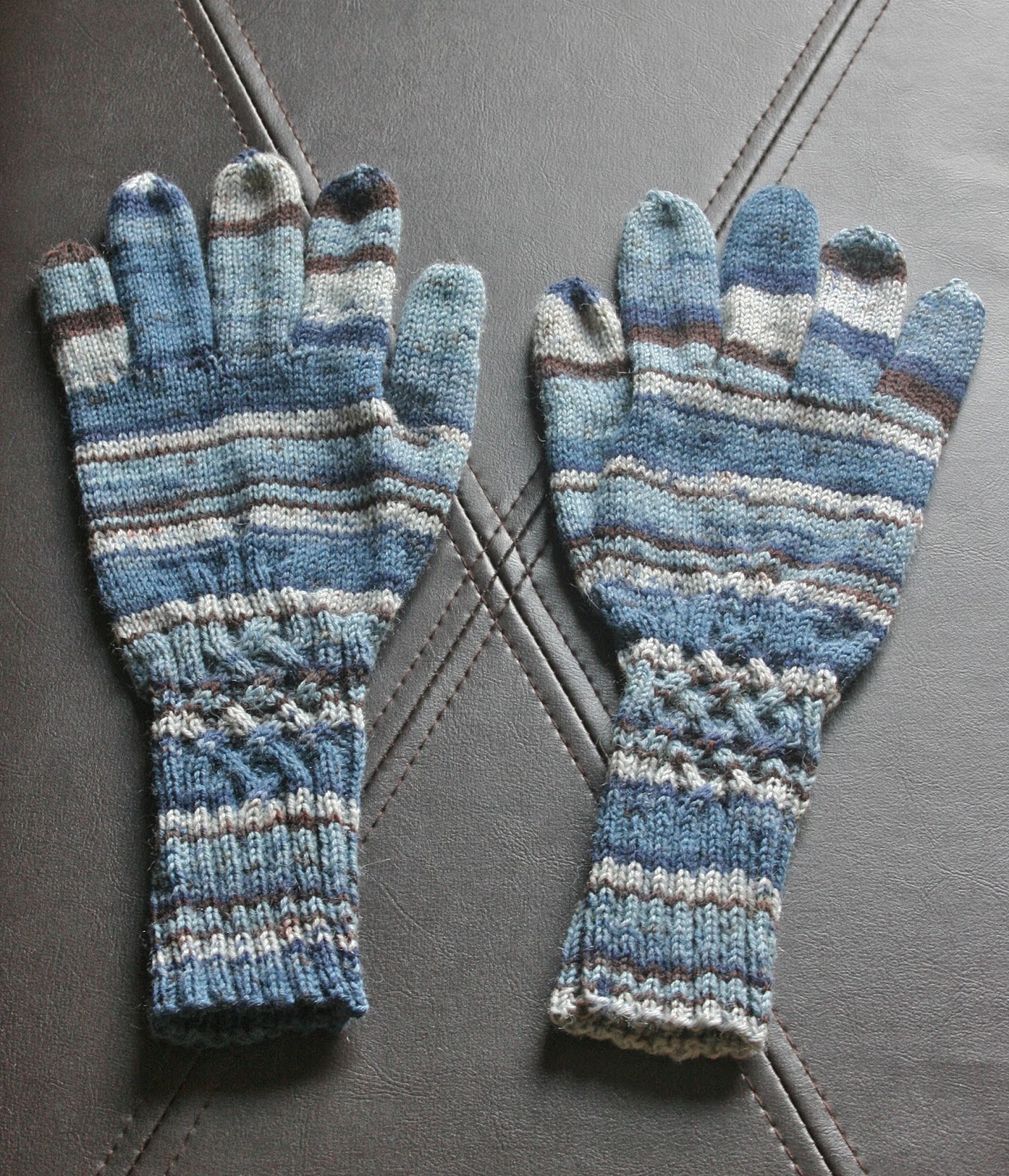 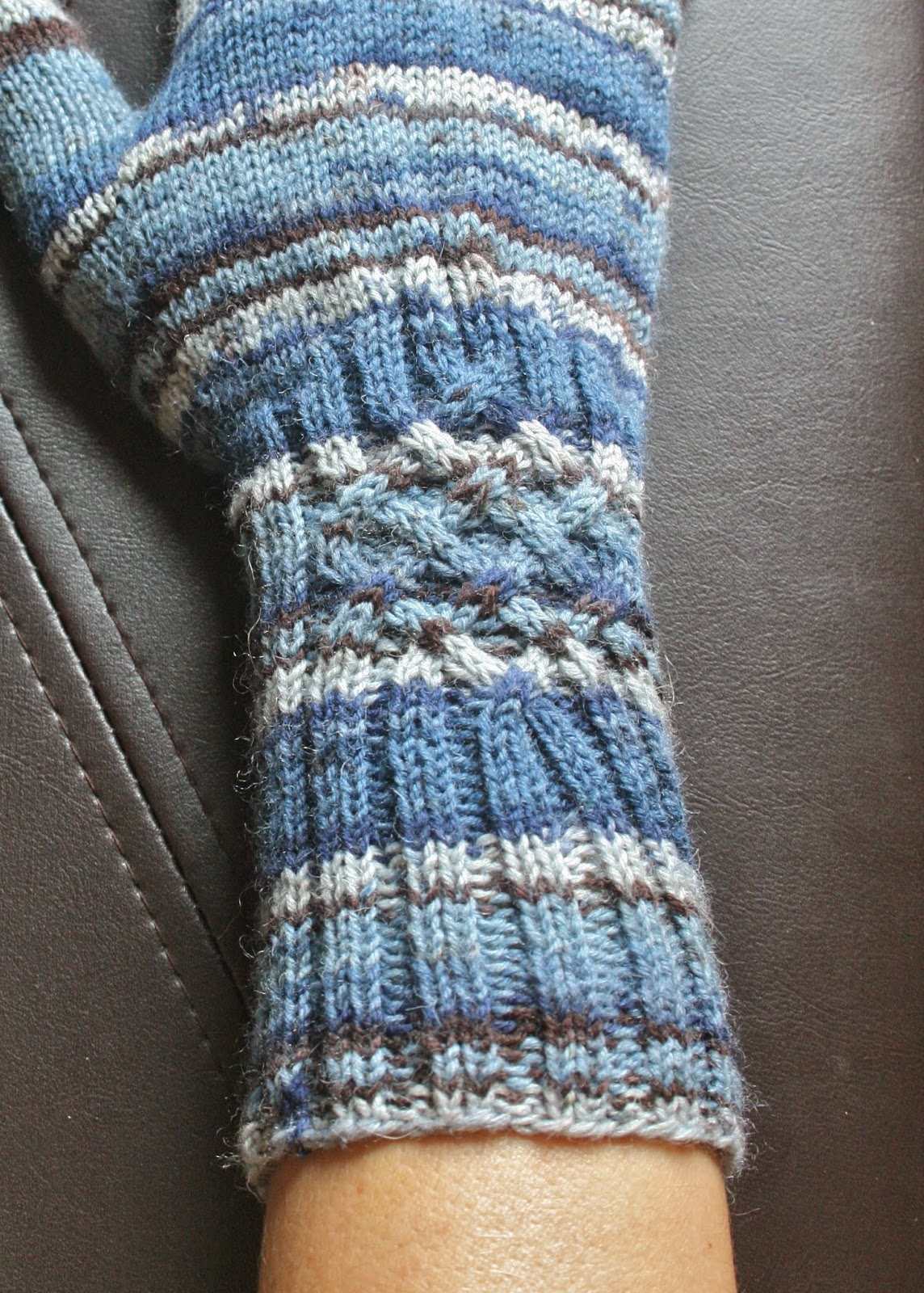 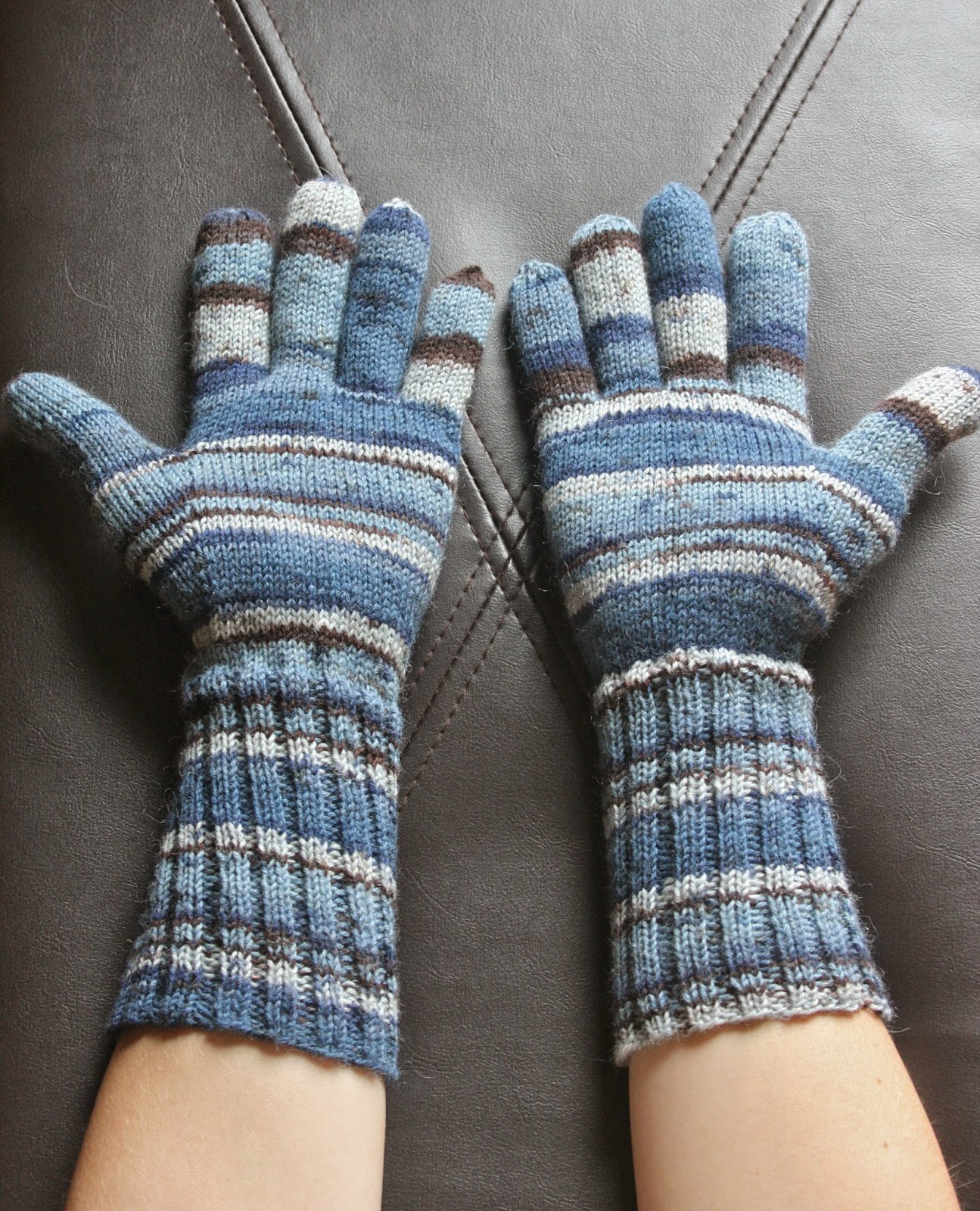 Self-striping yarn can be great, and it can be not so great.  When you are working a detailed cable pattern, stripes can really detract from the pattern and make it less visible.  This happened in the cabled knot on the gloves, but I'm still very happy with them.  They fit great (I made them big for me - I have TINY hands), so hopefully they'll fit "normal" people.  They'll be very warm and extend half way to the elbow, so that adds even more warmth.  I love the stripes on the fingers.  Gloves never cease to amaze me in their construction.  How you can increase, decrease, place stitches on hold, and end up with such an oddly-shaped yet well-fitting thing is fantastic.

I have a pair of wrist warmers nearly done on one pair of needles and a baby blanket on the other.  Here is a sneak peak of that: 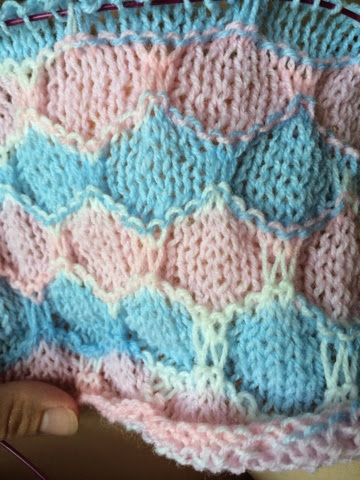 And on my small loom, my placemats are SOOO close to done.  I can taste it.  I should go work on them now....

Off I go!  Happy summer to you!

Posted by Unknown at 9:53 AM No comments:

Sometimes I'll just walk through the yarn store and a certain yarn jumps out at me.  This was the case with this yarn.  Of course, I'm sure thousands of people have had this exact experience with this same yarn, but hey.  What can I say?  These people know how to make good yarn. 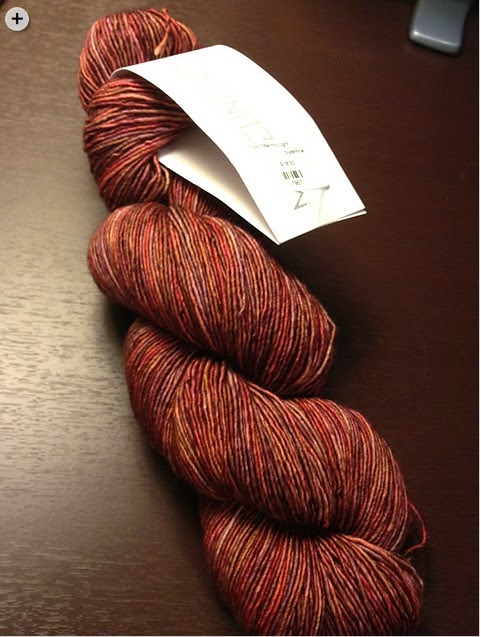 It's Madelinetosh Tosh Merino Light, in colorway Byzantine, which (by the way) is still available.  This beautiful single ply yarn is just a pleasure to work with.  I'll be a Madelinetosh test knitter any day.  The color changes are subtle, but unpredictable, and it doesn't pool into unsightly colors.  One skein made this: 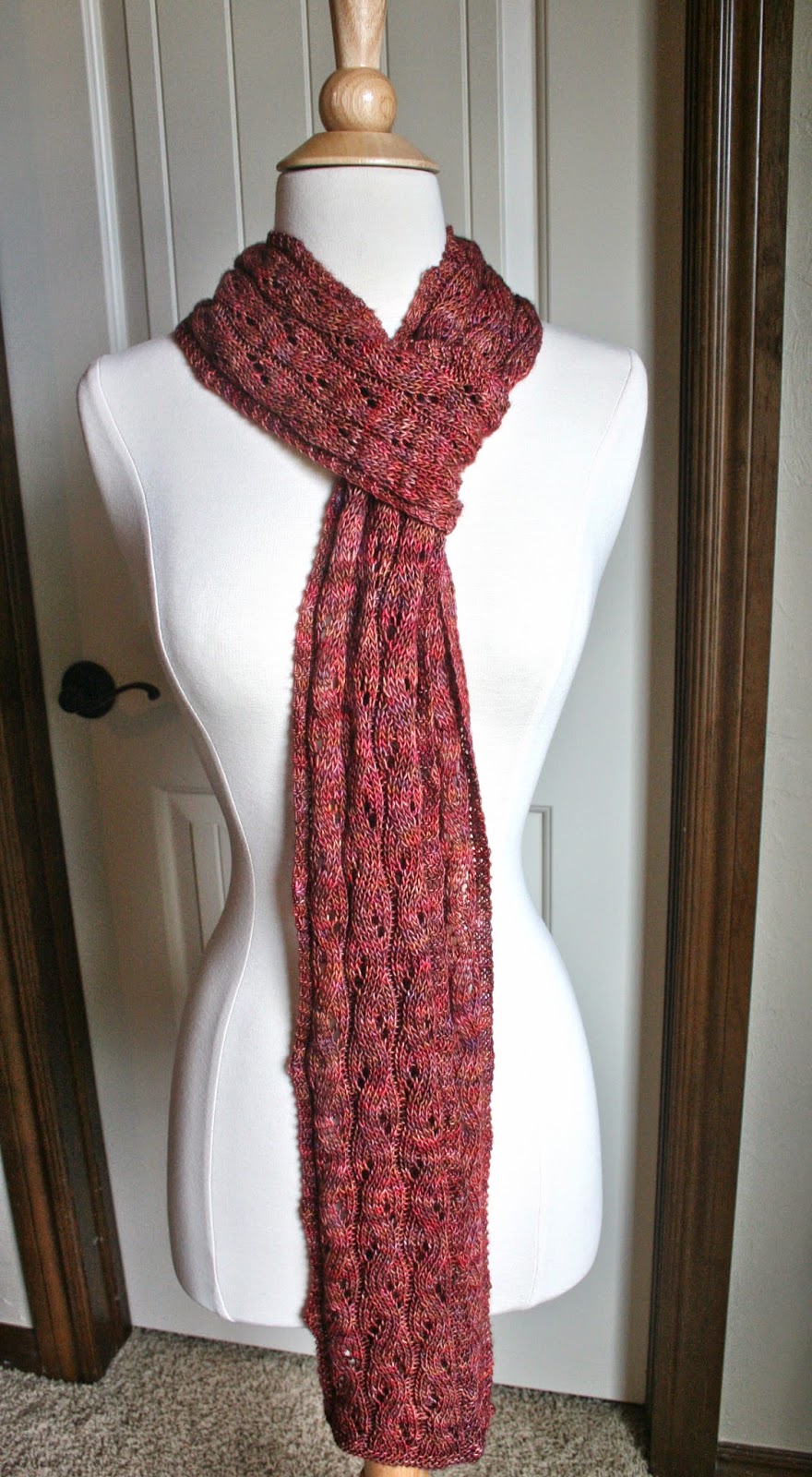 A lovely, long, lacy, lightweight scarf.  I made the scarf quite long (it measures 92"x5") to allow many different tying opportunities.  This stitch pattern was easy to work with and made a delicate leaf-like design. 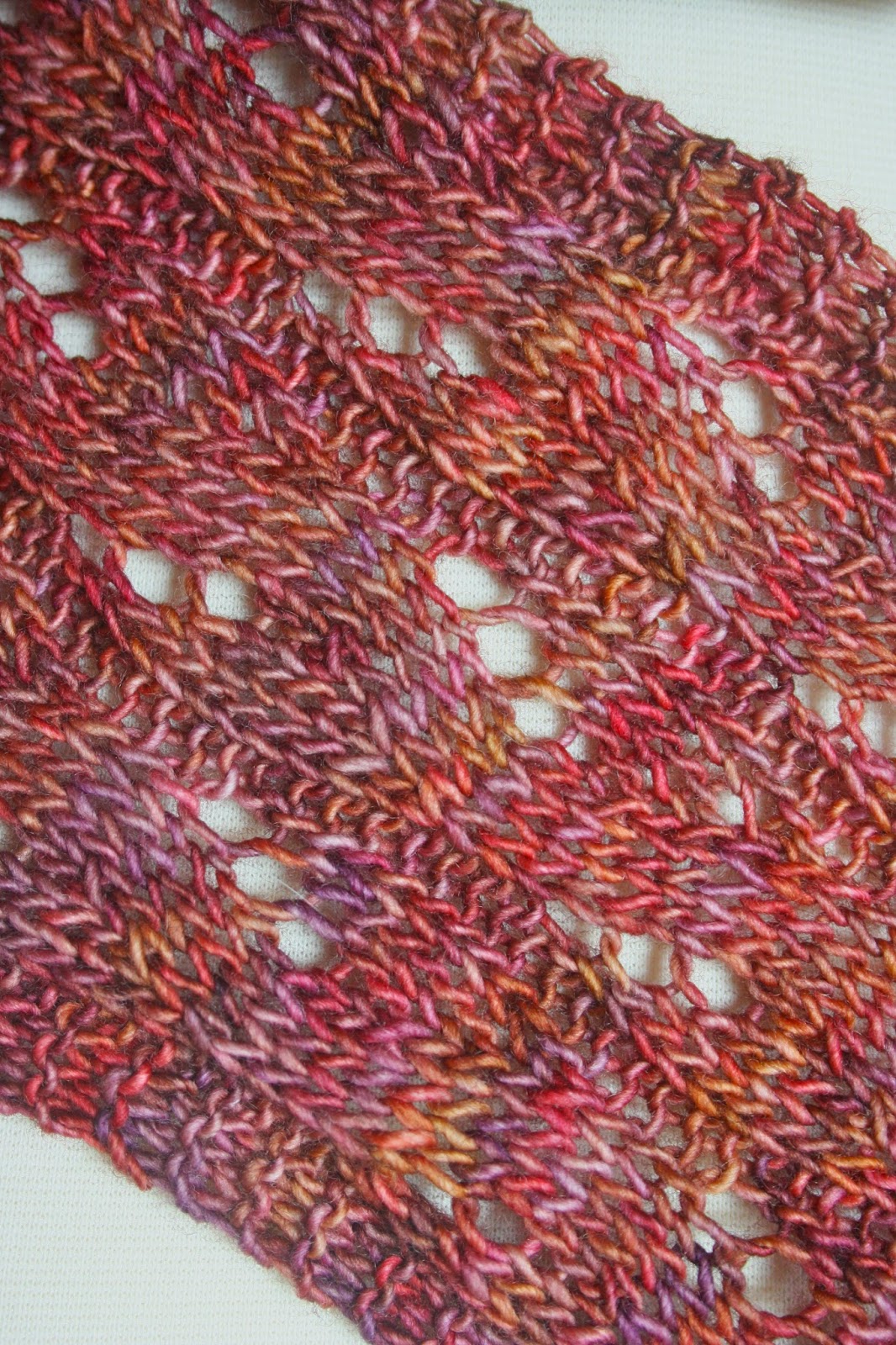 As I knit it, my mind wandered to my stitch dictionary and all the pretty lacy patterns in there that would work well in a scarf such as this.  I may just have to get another colorway and try another one! 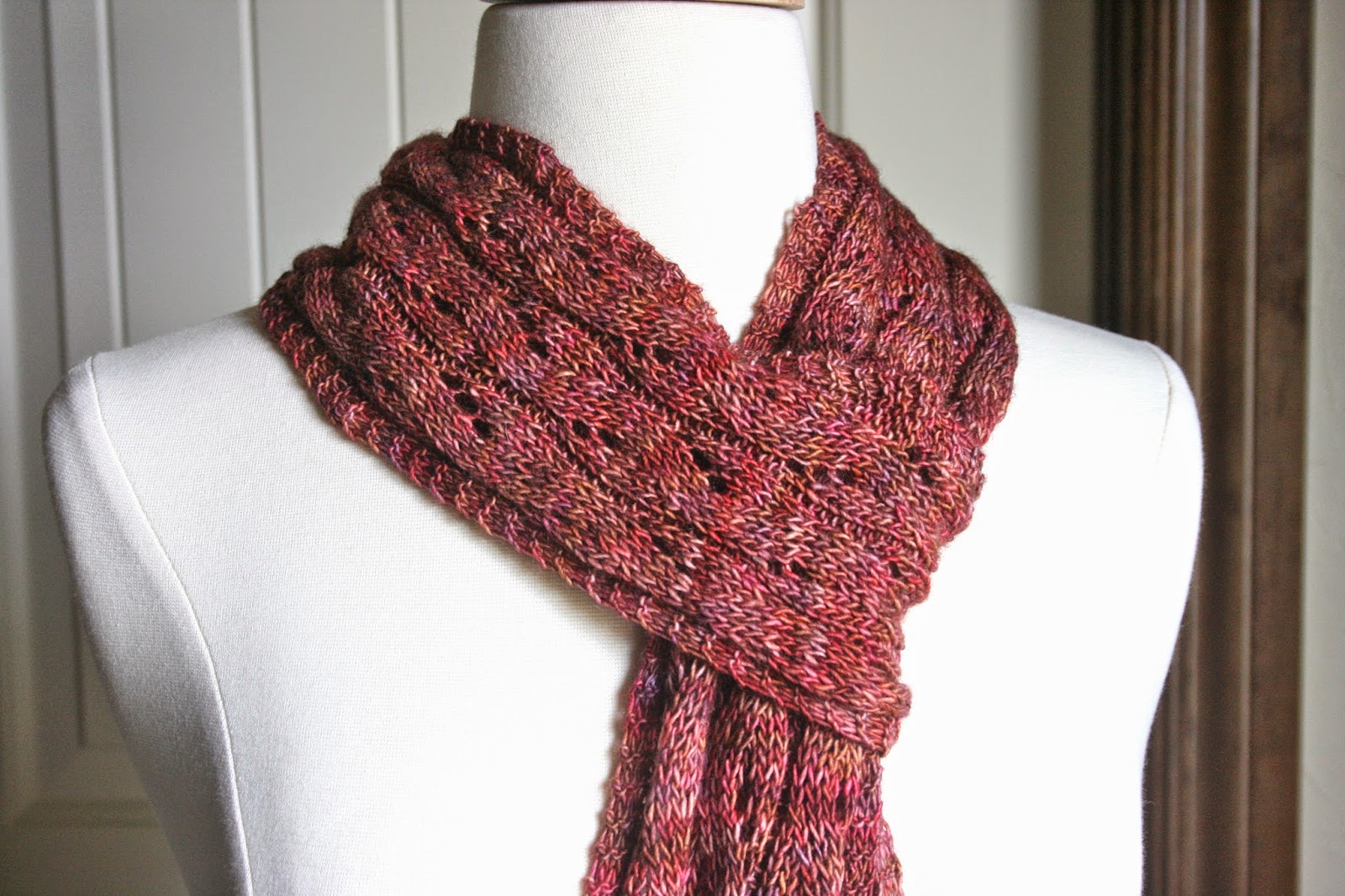 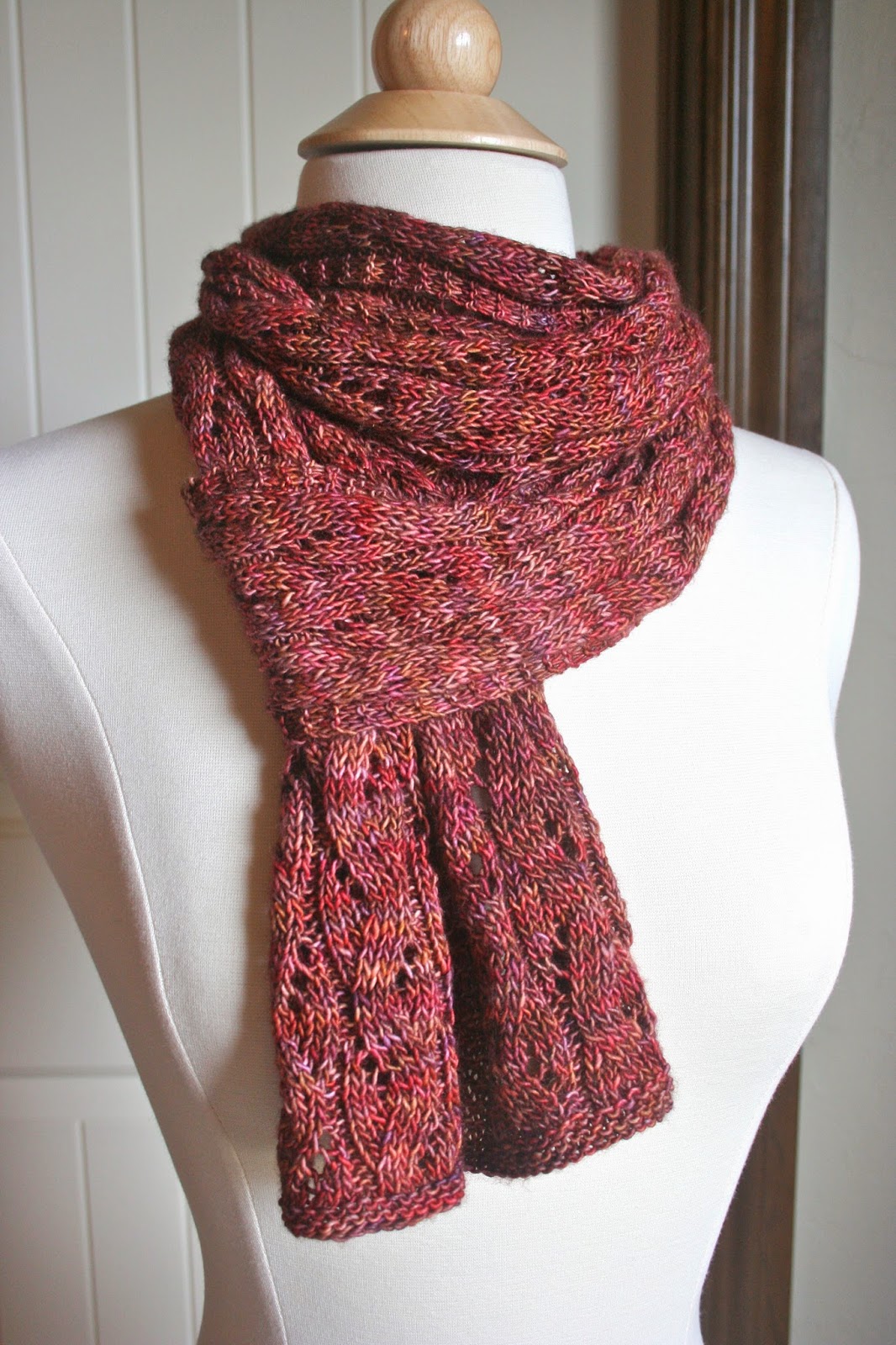 Amazing what you can do with two sticks and some string, huh?
Posted by Unknown at 8:30 AM No comments:

I imagine anyone that "works at home", or is a stay-at-home-mom, struggles with accountability from time to time.  I know I do.  It's easy to wear PJs all day, to throw in a frozen pizza instead of cooking that 4 course meal, to not shower all day...  I'll stop there because my list is embarrassingly long.  Being a mom is hard, and being THE caregiver 7 days a week is a service to your family.  You're giving yourself 24 hours a day, 7 days a week.  There's no one else to pass the buck to most of the time.

Recently, there have been changes happening in my household.  Elijah starting preschool in the fall has been a big deal for me.  I quit working a few days before giving birth to him, 4 1/2 years ago, and have been at home with our kids ever since.  And now, he will be entering the school world, half a day this first year, then all day after that.  And Noah will be starting next fall, only one year behind Elijah in school.  So I guess realizing these things, and deciding I'm ready to be more of a normal human being has prompted me to get myself in line.

I started with myself.  I told Chris I wanted a new wardrobe.  Primarily, my day to day clothing consists of sweats, old high school or college t-shirts, sneakers, and ponytails.  Certainly no makeup.  I gotta put my foot down (to myself, I guess!)  So I went SHOPPING. And while everything isn't quite fitting right yet (to those who don't know me well - I struggle with weight issues from ulcerative colitis - which is a work in progress), I'm so happy to have adult clothes again...AND well-fitting bras!  I also decreed that showers will be taken each MORNING, with acceptable clothes put on after that, and once the kids are in bed, I can change to my sleep wear (new for me - before was always a t-shirt and sweats!) and relax.  No more grocery shopping at 10pm.  Relax, chat with my husband, and then go to bed.  NOT fall asleep on the couch.

The other thing I'm implementing is a cleaning schedule.  This is probably my biggest blunder.  I am perfectly fine playing with the kids, or weaving, or knitting, or cooking, or gardening .....  etc..... instead of cleaning.  Insert accountability once again.  When we lived in Kansas City, we had a LARGE rental home and I was pregnant with Noah.  I HAD to have a cleaning schedule.  So I dusted that schedule off and made some changes.  I want to share it with you.  Who knows, maybe you need a little inspiration, too! 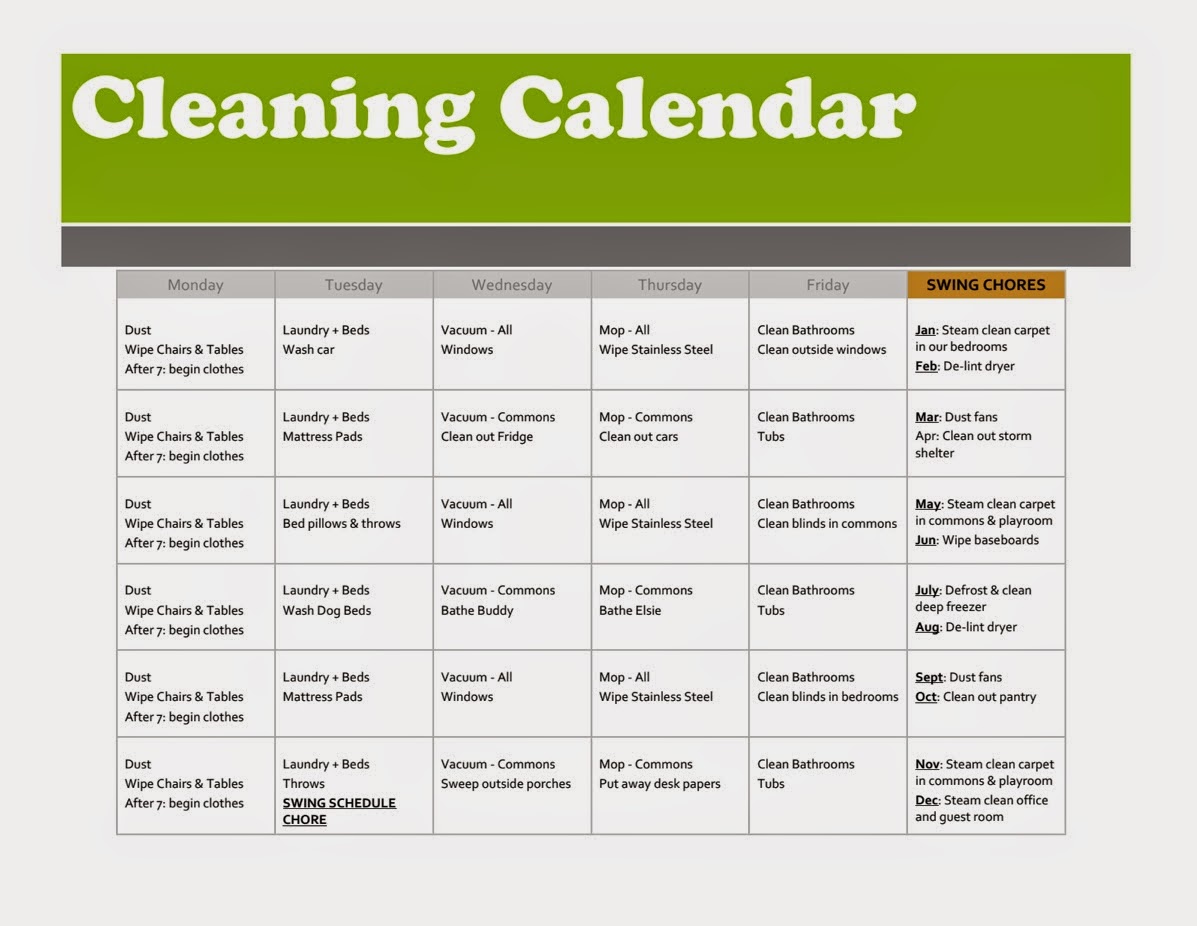 Some of the changes I made correlate with energy usage - I'm enrolled with a time-specific pricing program with the electric company, so I avoid doing chores that require electricity between the hours of 2-7pm, when my energy costs are highest.  I also dry many clothes on the line outside.

Now, there are chores that I do every day that this schedule makes no mention of: dishes, picking up, etc.  But for any given day of the week, I can look at this list and know what I have to accomplish BEFORE I can proceed with my knitting or weaving.  It gives me motivation.

I've been very consistent with it for 4 weeks now, and I'm happy that I can get my household obligations done, as well as most of my knitting and weaving jobs.  They suffer a small amount, but ya know.... my family is my job right now.  All the rest is just fluff.
Posted by Unknown at 9:33 PM No comments: