Ok, I'm guilty.  These have been done for quite a while, but have been sitting on my chair-side table for a month waiting to be hemmed.  I've discovered I don't much care for hemming....

Since the idea of weaving entered my mind, I wanted to weave kitchen towels.  I don't know why, but I love dish towels, tea towels, whatever you call them.  Having towels that dry well, are soft and supple, and gentle on your dishes makes such a difference.  So I decided to weave some!  I started off with unmercerized cotton.  Mercerization of cotton involves exposing it to a sodium hydroxide bath, which is then neutralized by an acid bath.   This treatment increases luster, strength, affinity to dye, resistance to mildew and shrinkage. Mercerized yarns more readily accepts dye and hold the color longer.  In the weaving world, this is called perle cotton.  While there are many benefits to mercerized cotton, ABSORBENCY is what is sacrificed in the process.  And we all know absorbency is what we need in a kitchen towel.

So here is my UNmercerized 8/2 cotton, before I wound the warp.  I chose 2 colors: natural and a pretty "china blue". 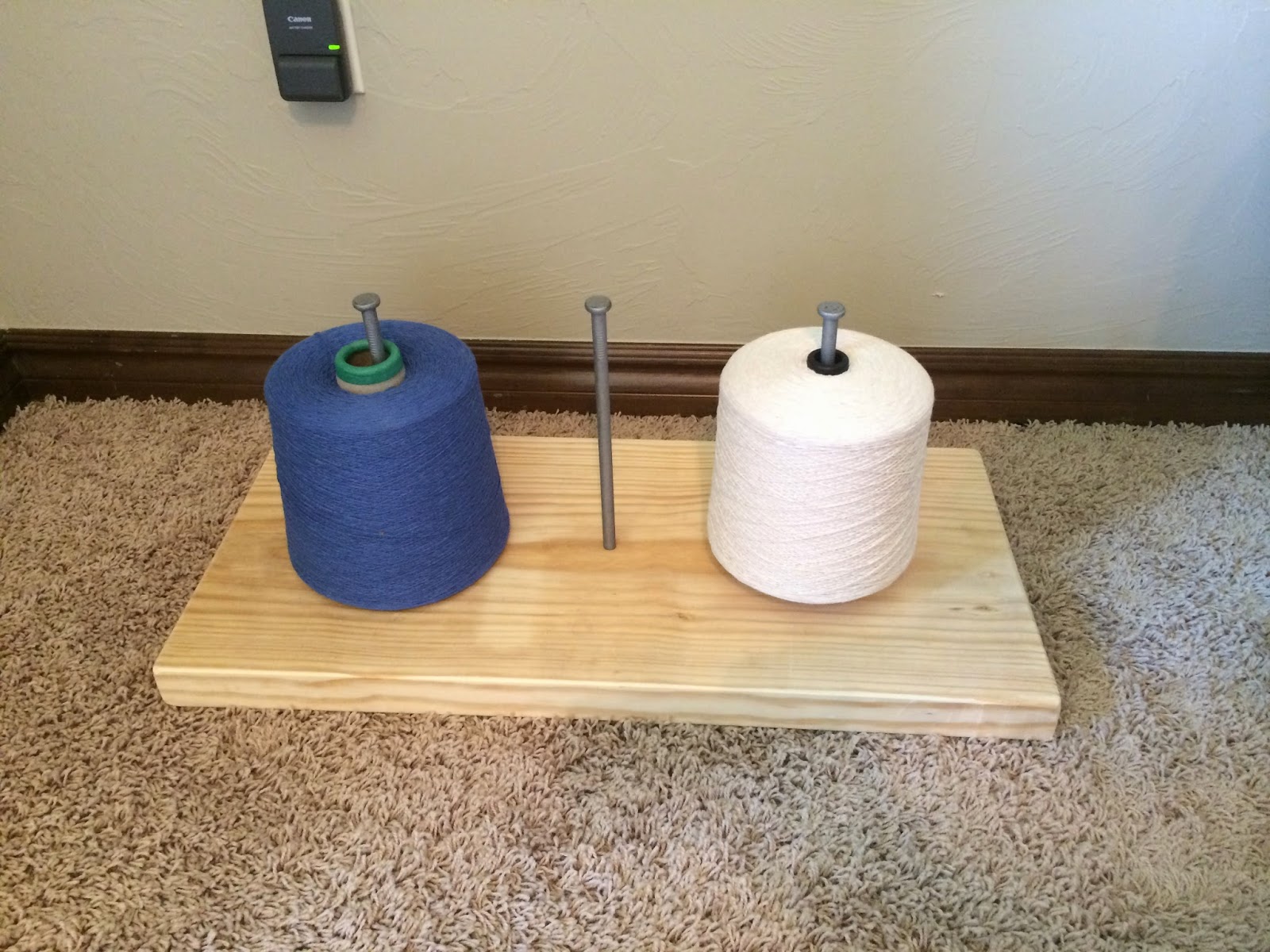 I wanted to make these towels plaid-like.  I designed a pattern, wound the warp, and dressed the loom.  I wanted to try different treadling patterns for each towel.  I looked through my weaving pattern directory and found 4 to try. 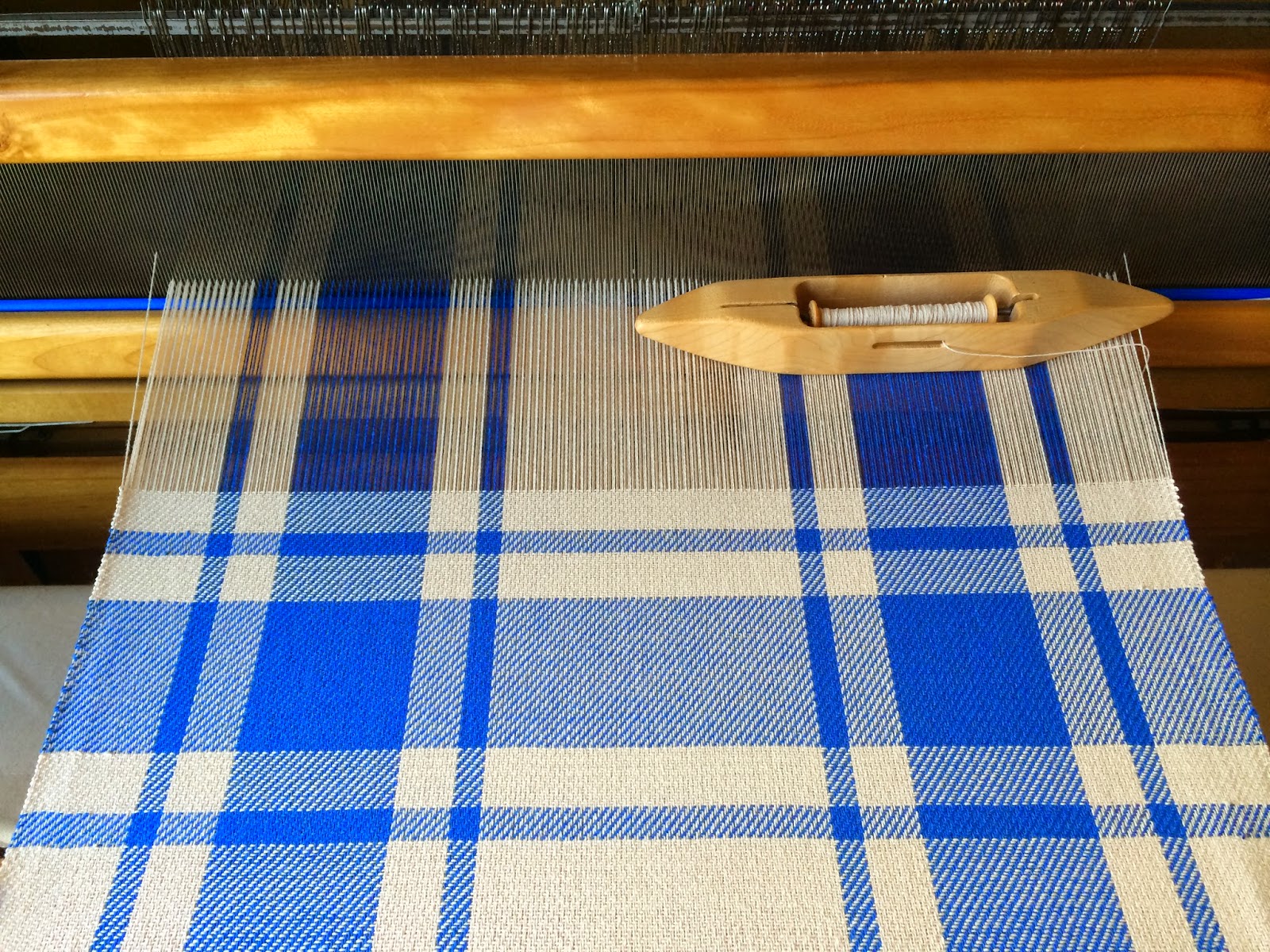 Here is the first towel on the loom.  I used an S diagonal (really a plain twill) on this one. 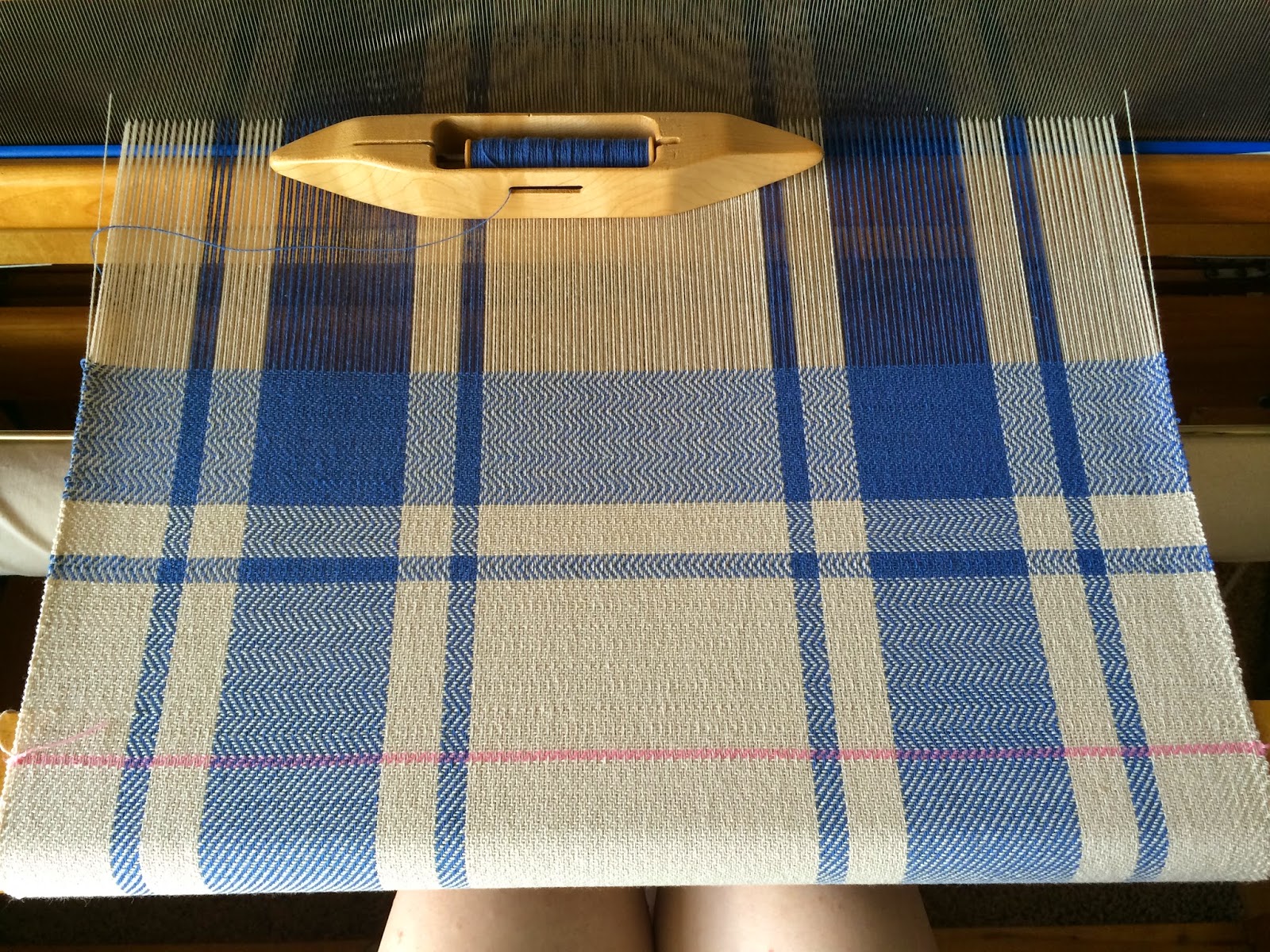 Once I finished the first towel, I placed 4 throws of a contrasting yarn, and proceeded with the next towel.  The next pattern was an extended zigzag.  This one was a lot of fun to weave. 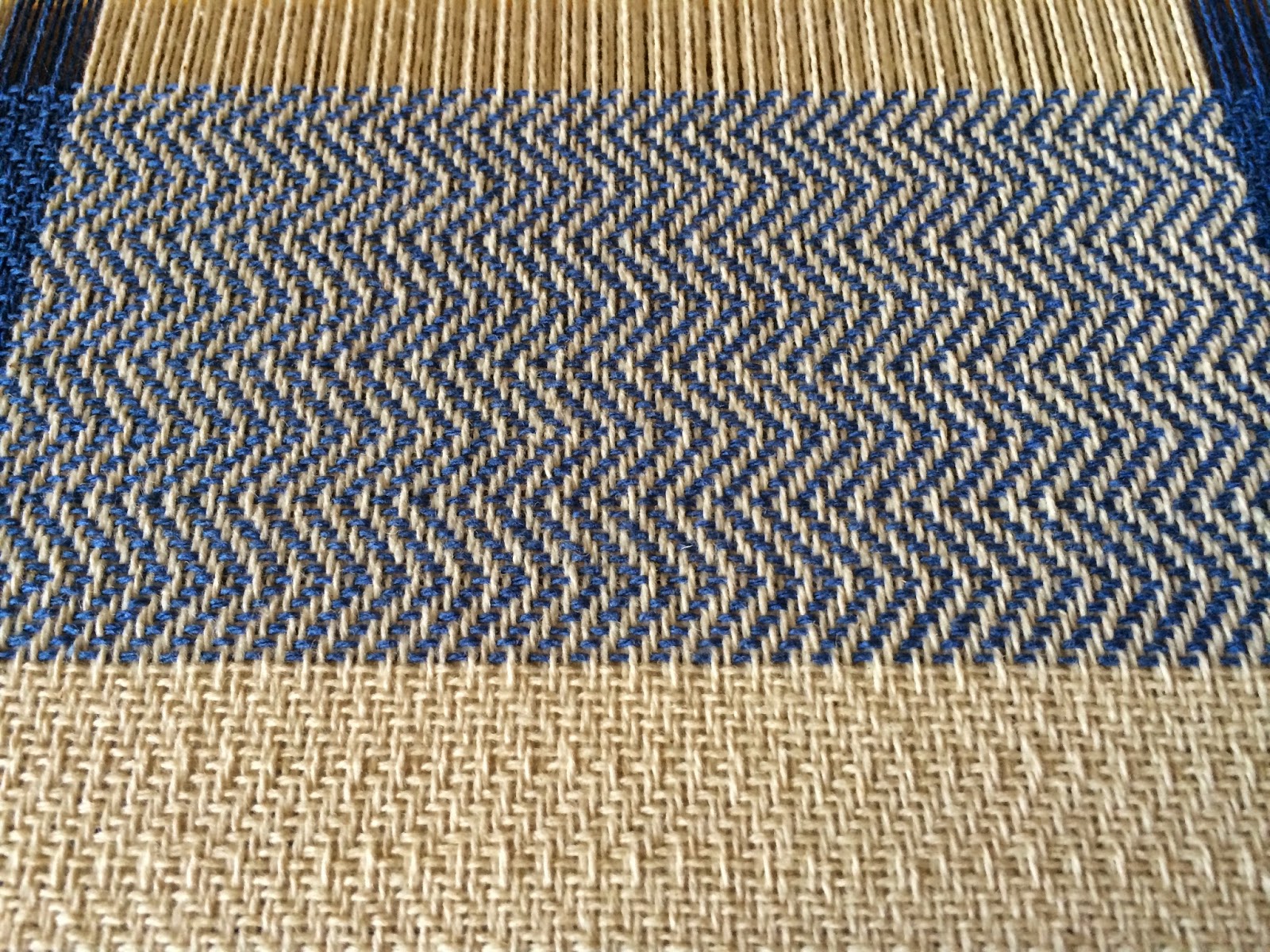 Up close on the zigzag.

I didn't take pictures on the loom of the remaining two patterns: but I did a Bell Celtic pattern and then Hopsack. 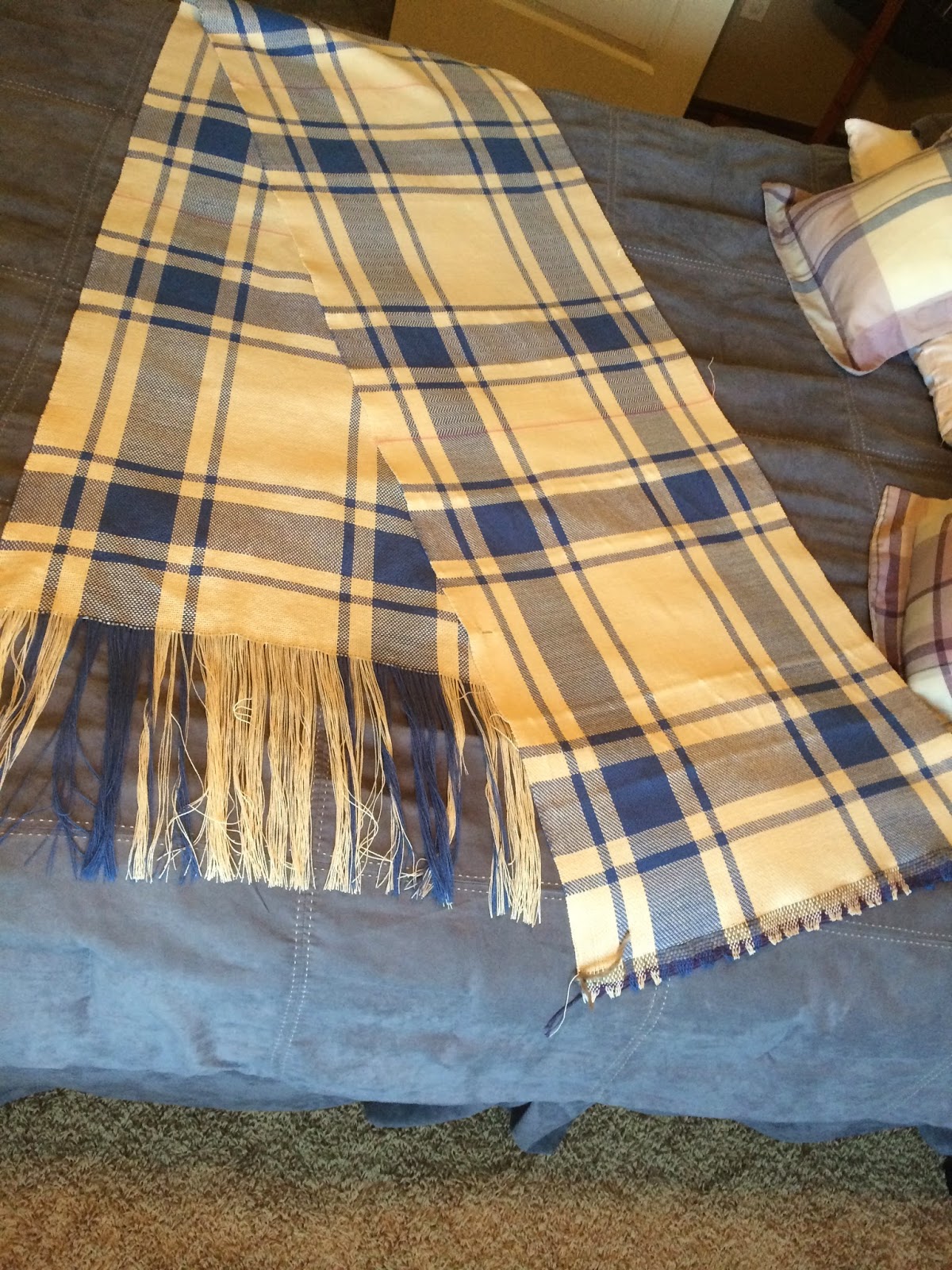 Here are the towels right off the loom! 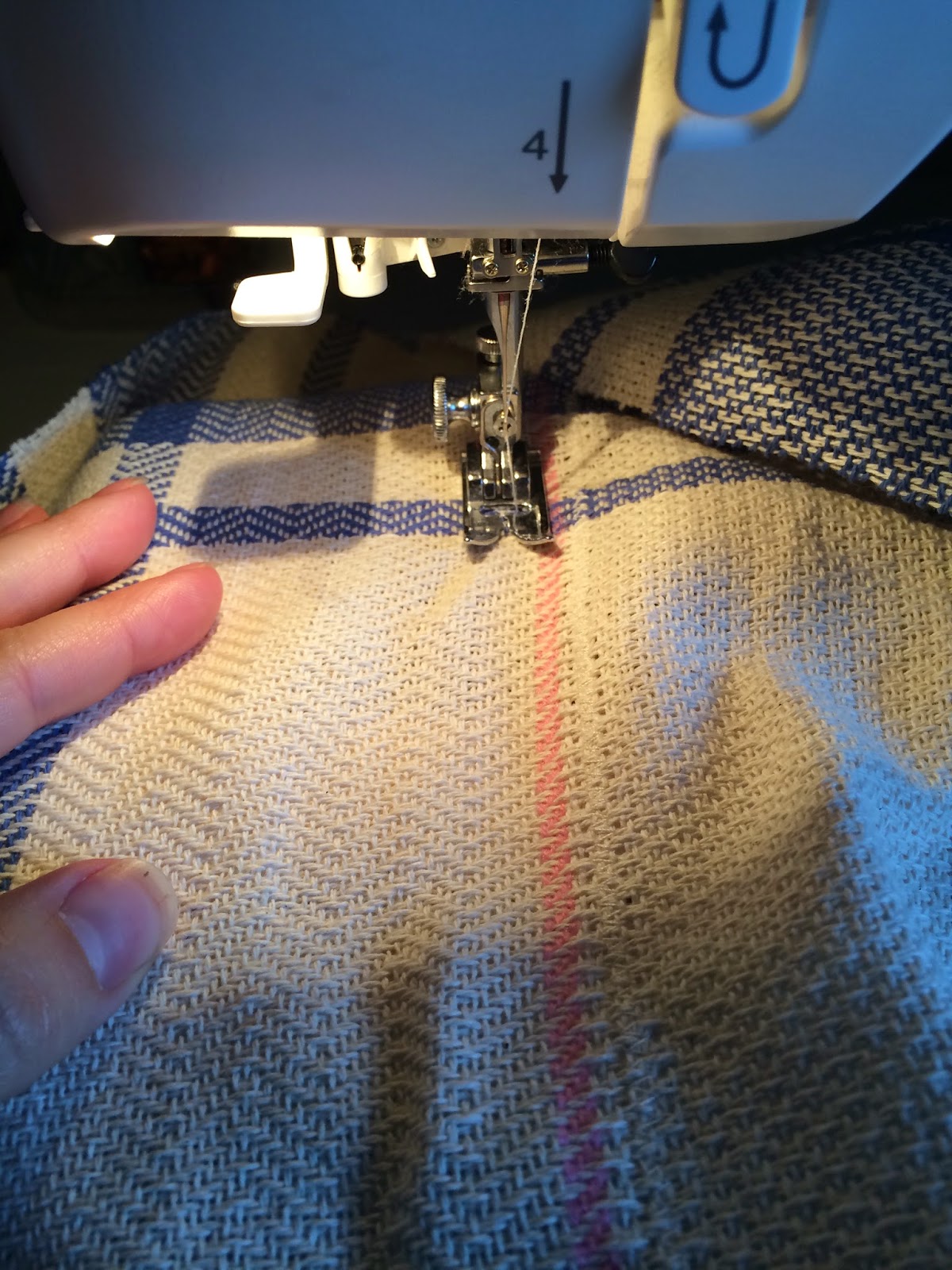 Next up was separating the towels.  I performed a machine zigzag stitch on either side of the pink dividing yarn to secure the warp and wefts... 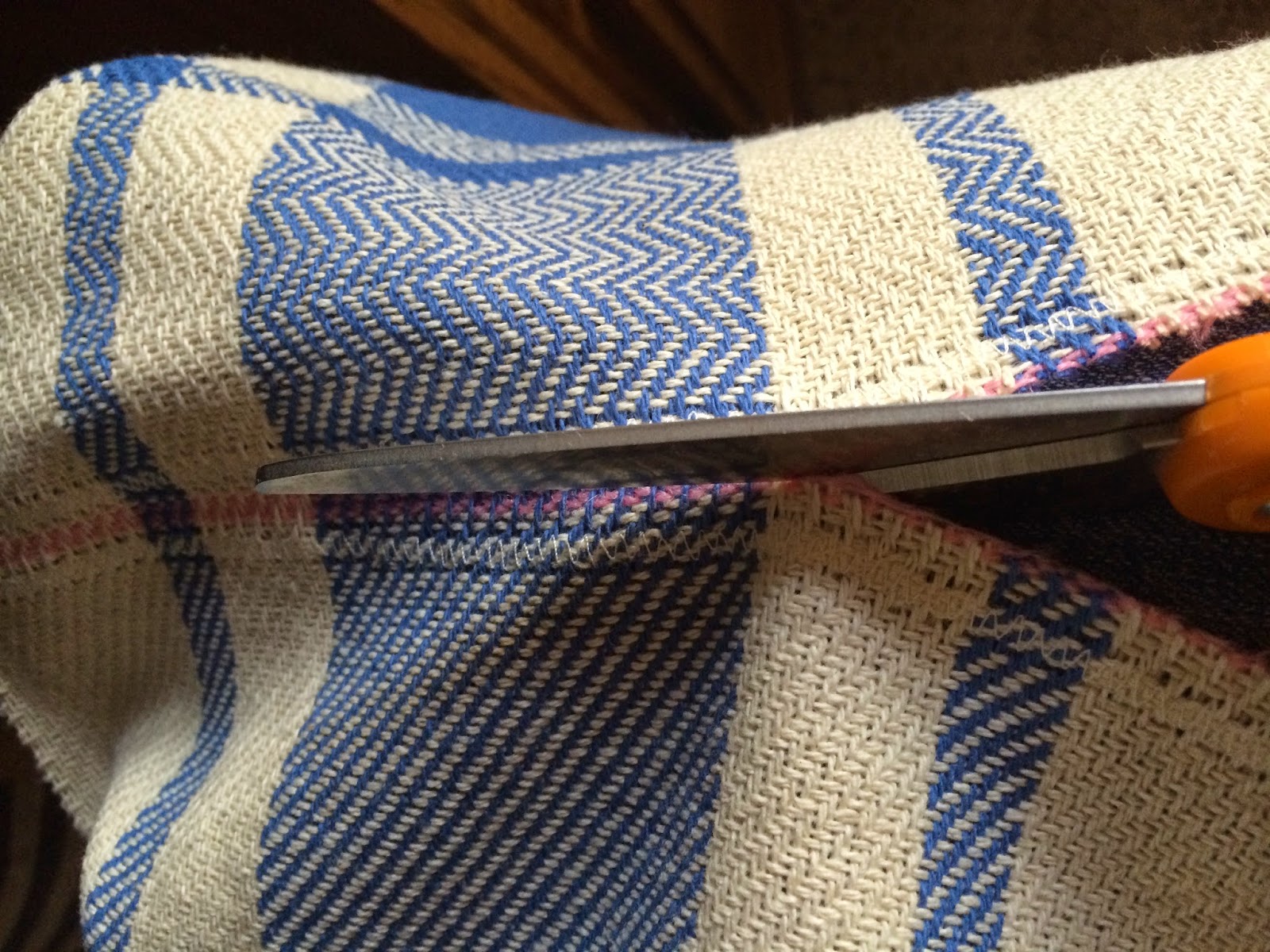 And then cut.  I tell ya, that is unnerving.  I think I was praying the whole time that the stitching would hold! I decided to hem the towels by hand.  For some reason, the tension on my machine was acting up, and I wasn't confident that the hem stitch from the machine would look alright.  Plus, I was wanting to do as small a hem as possible, and Lord knows I'm not a good enough machine sewer to keep that hem in place as it moved through the machine.  Thus, enter the unhappy task of hemming.

Once it was (finally) done, I washed them up by hand, dried them in the dryer, and then pressed them.  Check out how much the pressing helped! 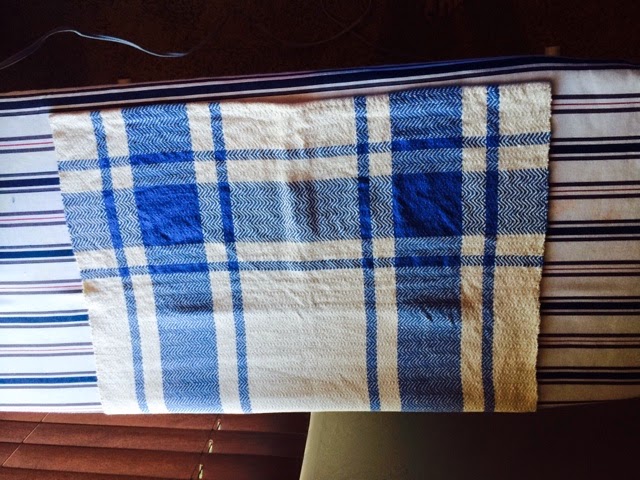 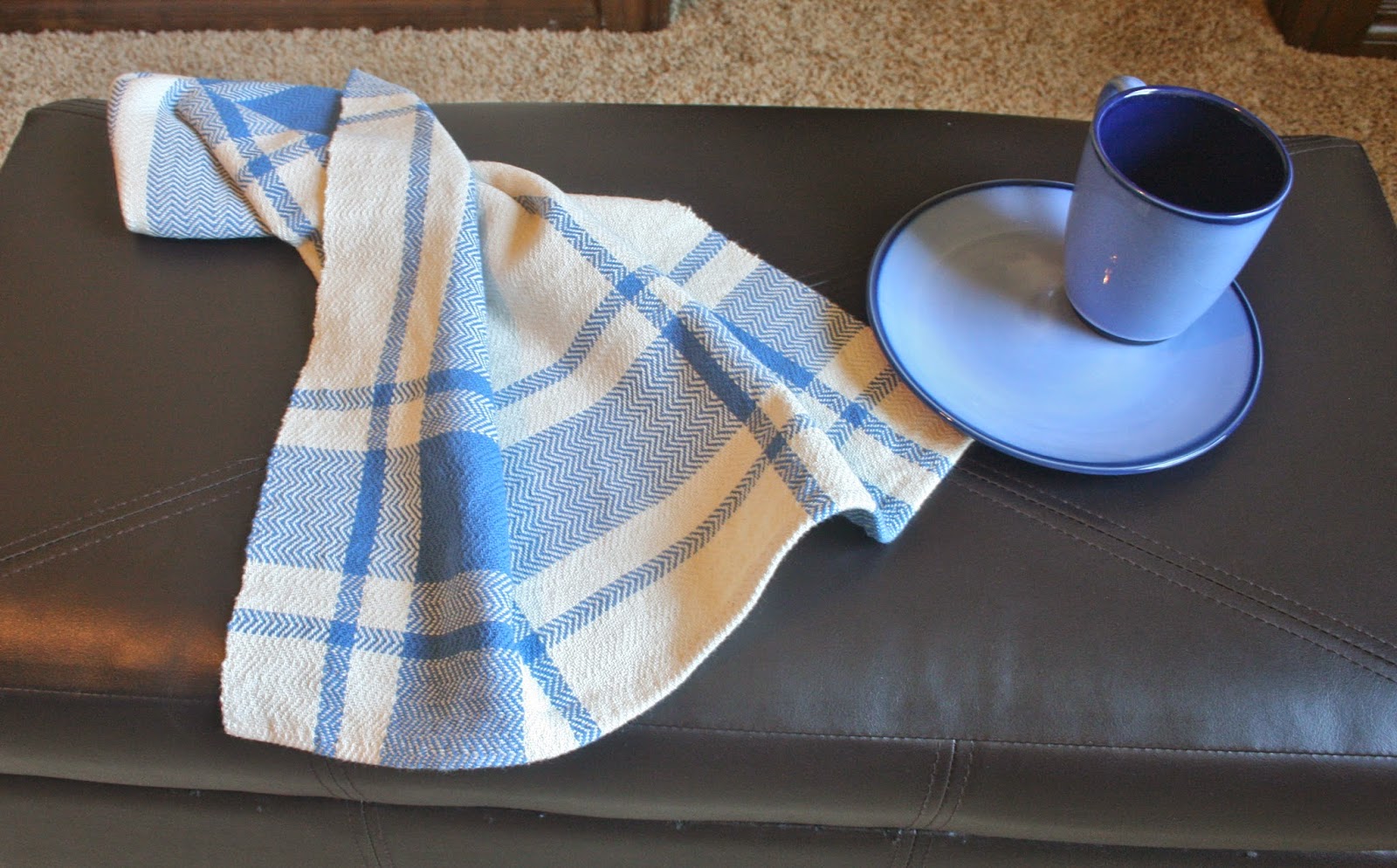 Here is the finished product(s).  I'm so pleased with them.  I made them to be sold at the craft fair coming up, but I really am going to have a hard time letting these go.  They look so absorbent and feel so soft, I know they'll be a cherished piece of someone's kitchen someday! 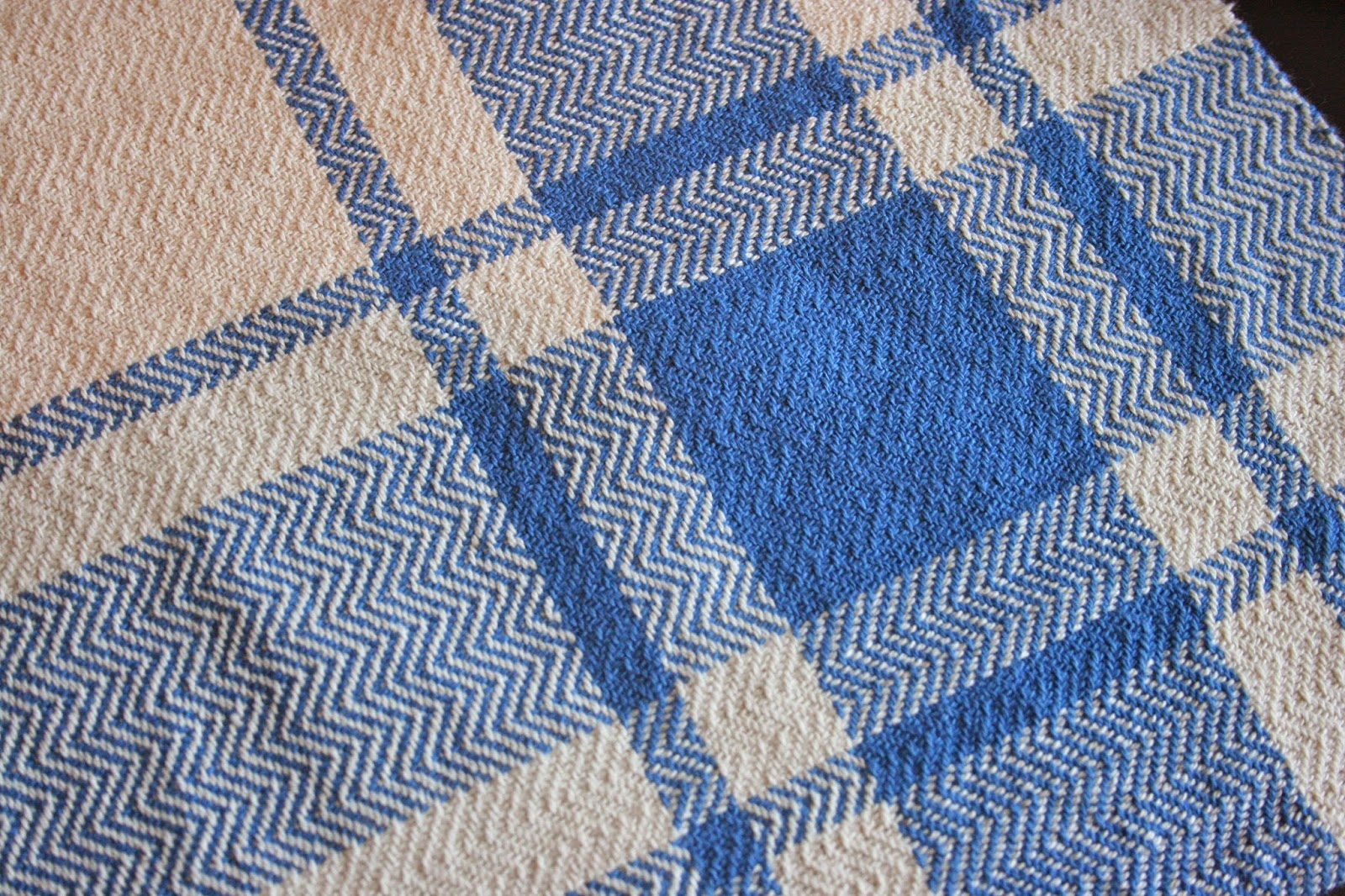 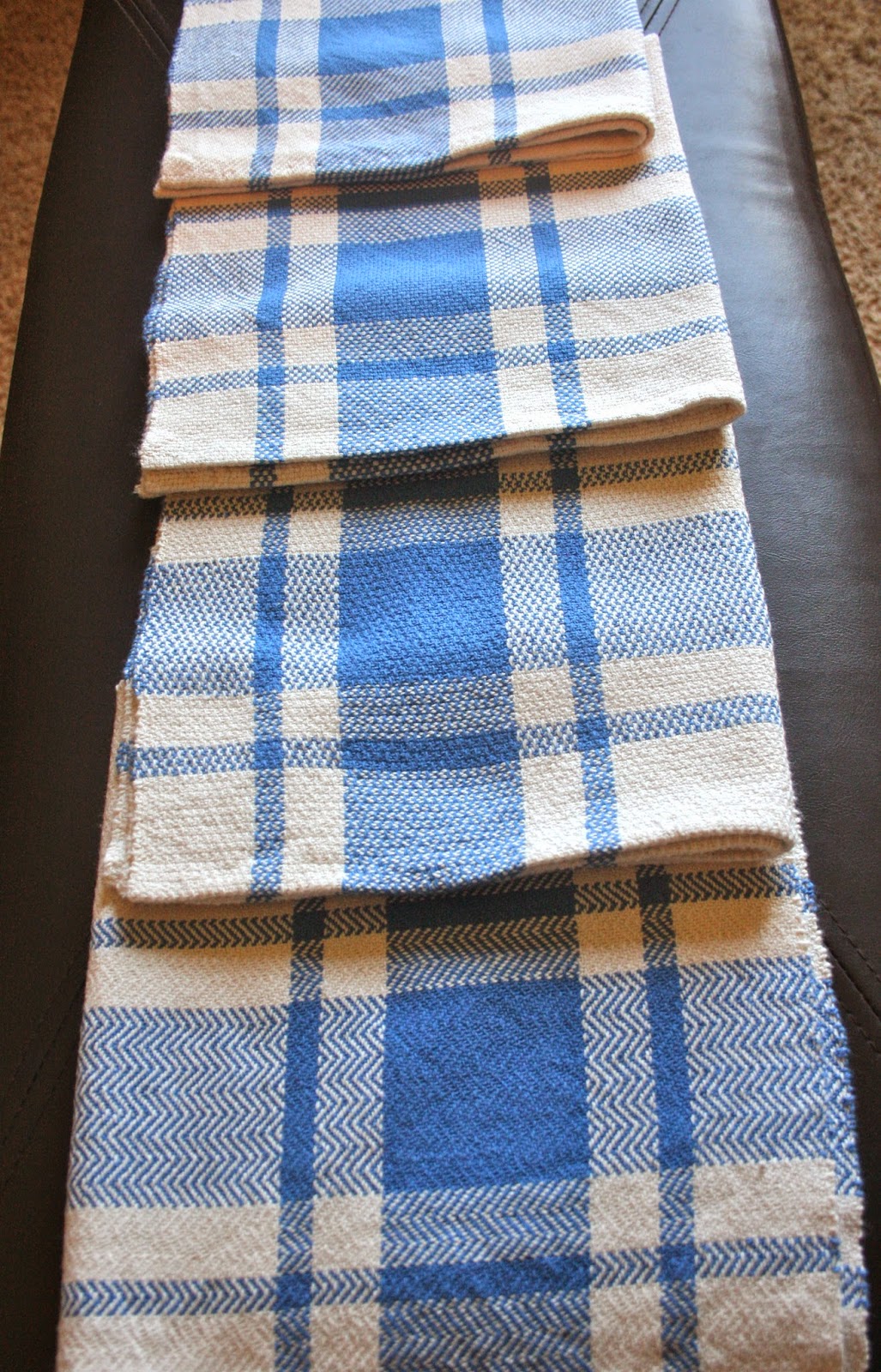 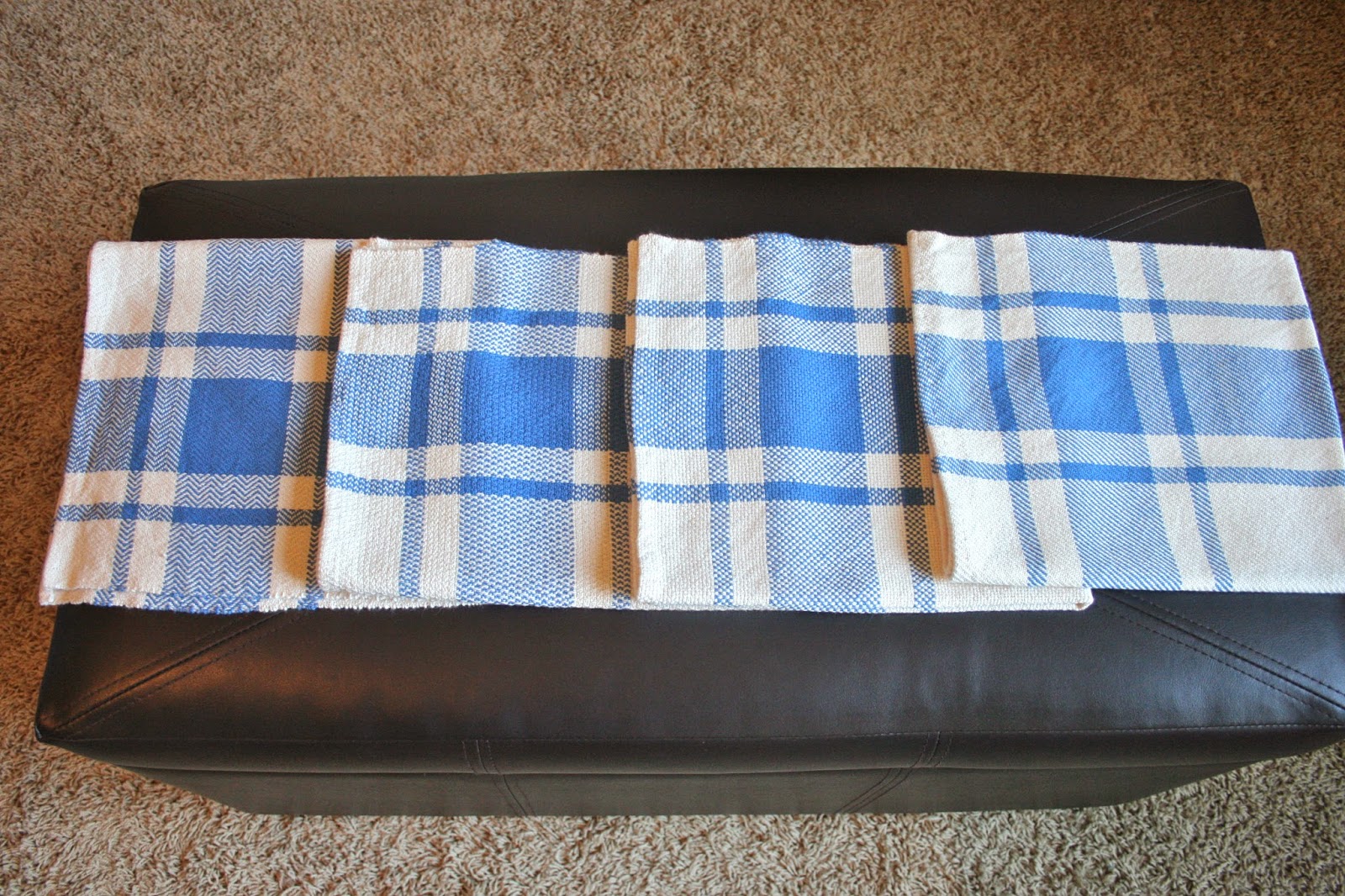 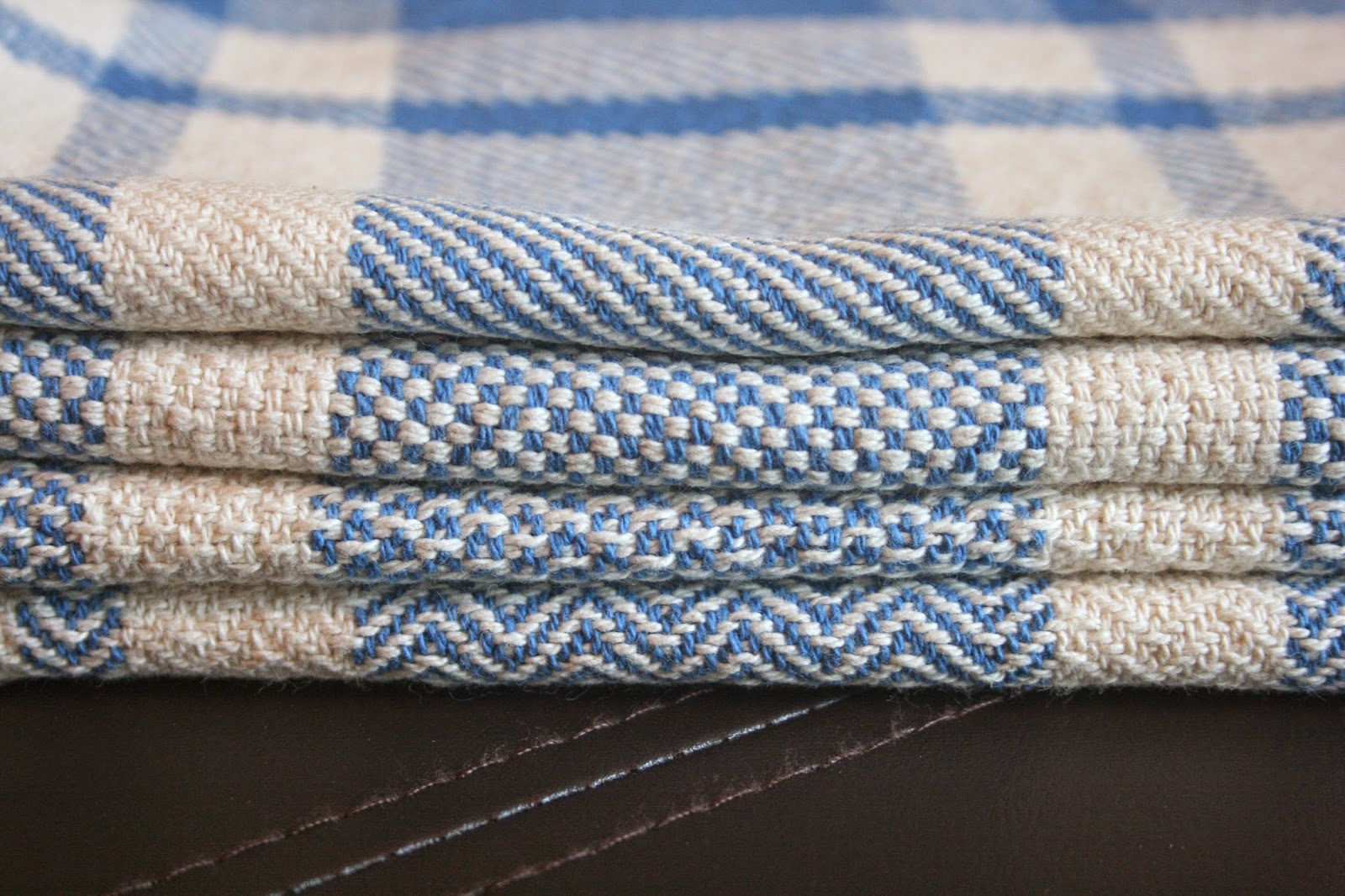 And a special shout-out to one of my partners-in-crime, who helped with the photo shoot! :) 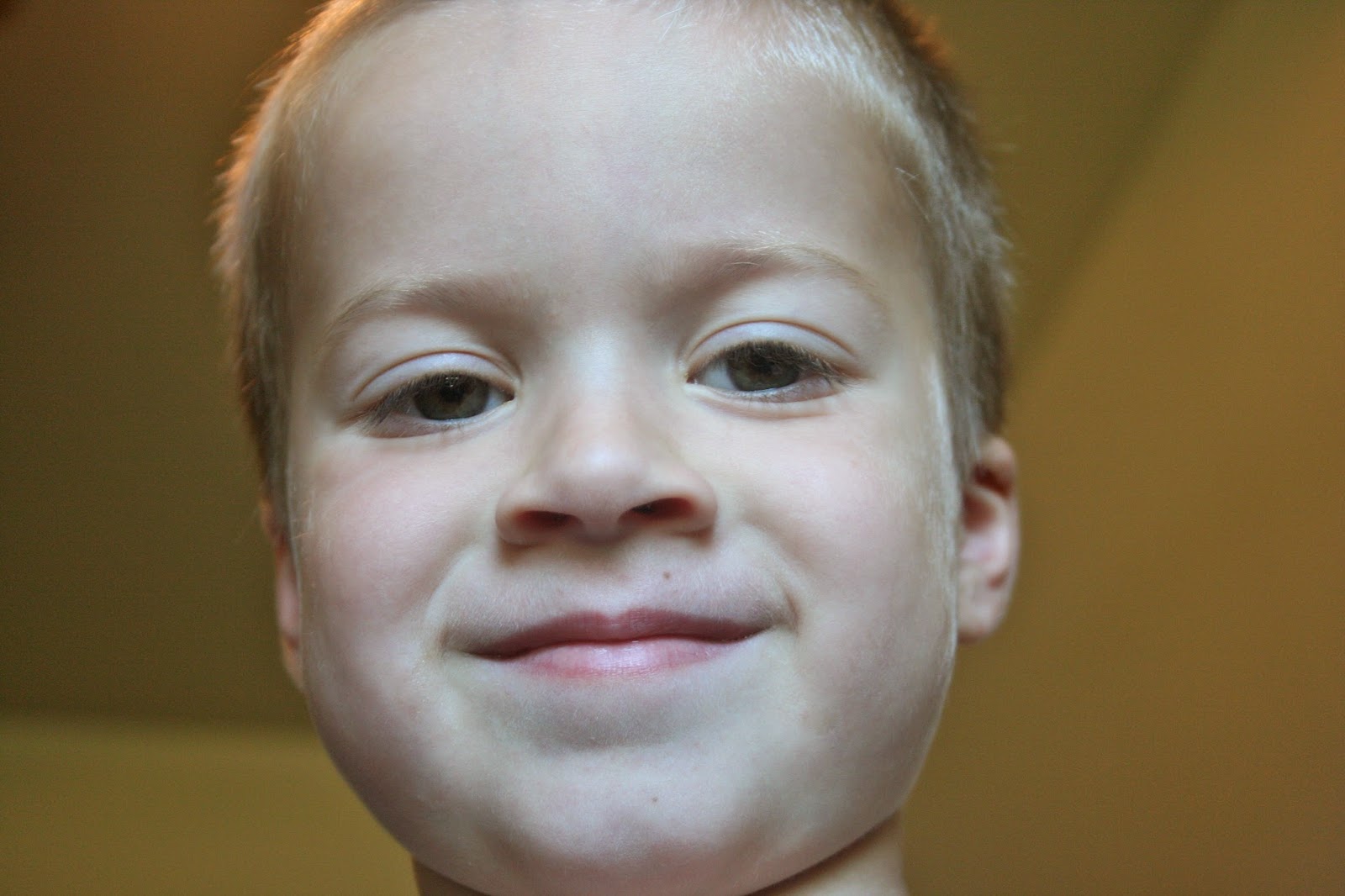 Due to the popularity of these towels, I've scanned and linked the copy of my weaving record sheet which will give you instructions on how to make your own.  If you have any questions or can't read my writing :), message me.

A baby blanket for a special couple

We have friends that we met while my hubby Chris was in his master's program at KU.  They are the nicest people, and even though they live in Texas, we try to get down there to see them once a year.  This year, they welcomed their first child into this world, and we were thrilled for them.  Chris asked me to make them something for the baby to use.  Here's what I came up with.

I'd seen a lot of really stunning blankets using a single our dual colored warp combined with a variegated weft, so I decided to give it a try.  I found this beautiful colorway (Agua) in Manos Del Uruguay Maxima (100% wool, single ply) : 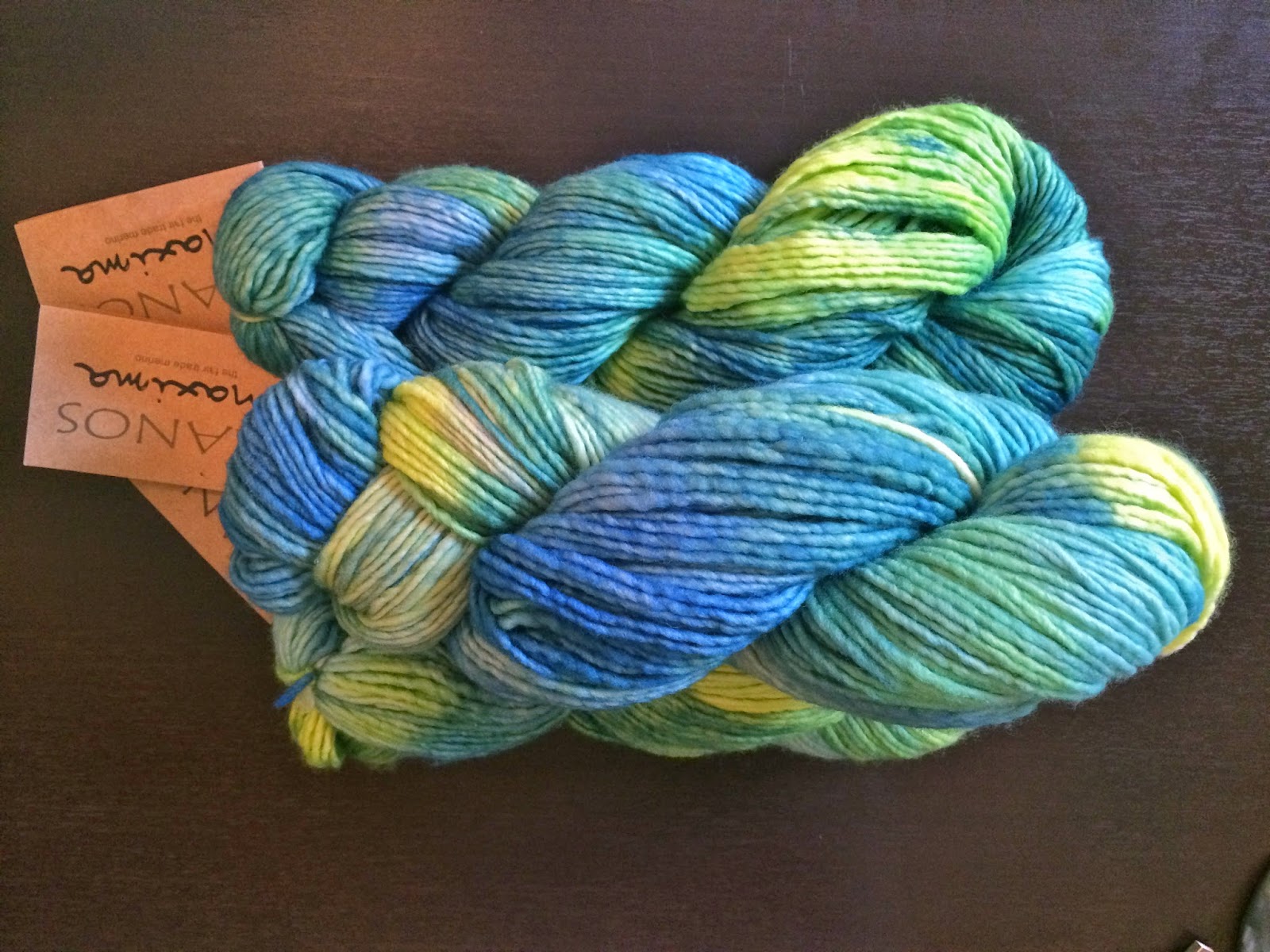 and found two colors of 3/2 cotton to match.  In retrospect, I would have picked two colors that were slightly more different, because I think it's hard to see the difference between the blue and teal.  But it's still pretty!

I was shooting for a 40"x40" receiving blanket size, but inadvertently wound a few too many warp threads, so I FILLED my 45" floor loom, each dent was occupied.  That meant I also used 540 heddles!  Whew! 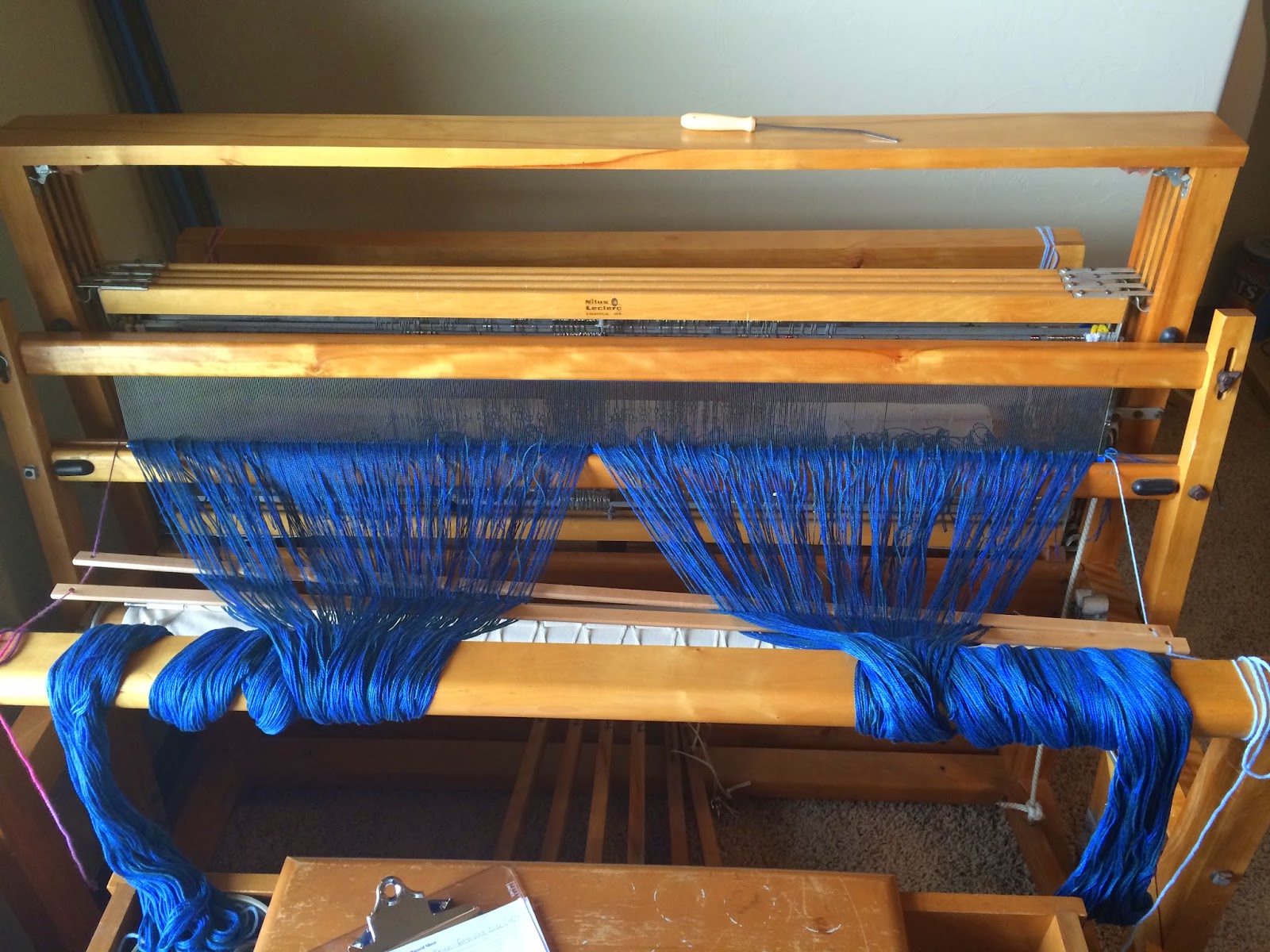 I used a 12 dent reed, and I think if I were to try to make this better, I would thread it with a 10 dent.  The warp could have been farther apart to let the weft really shine. 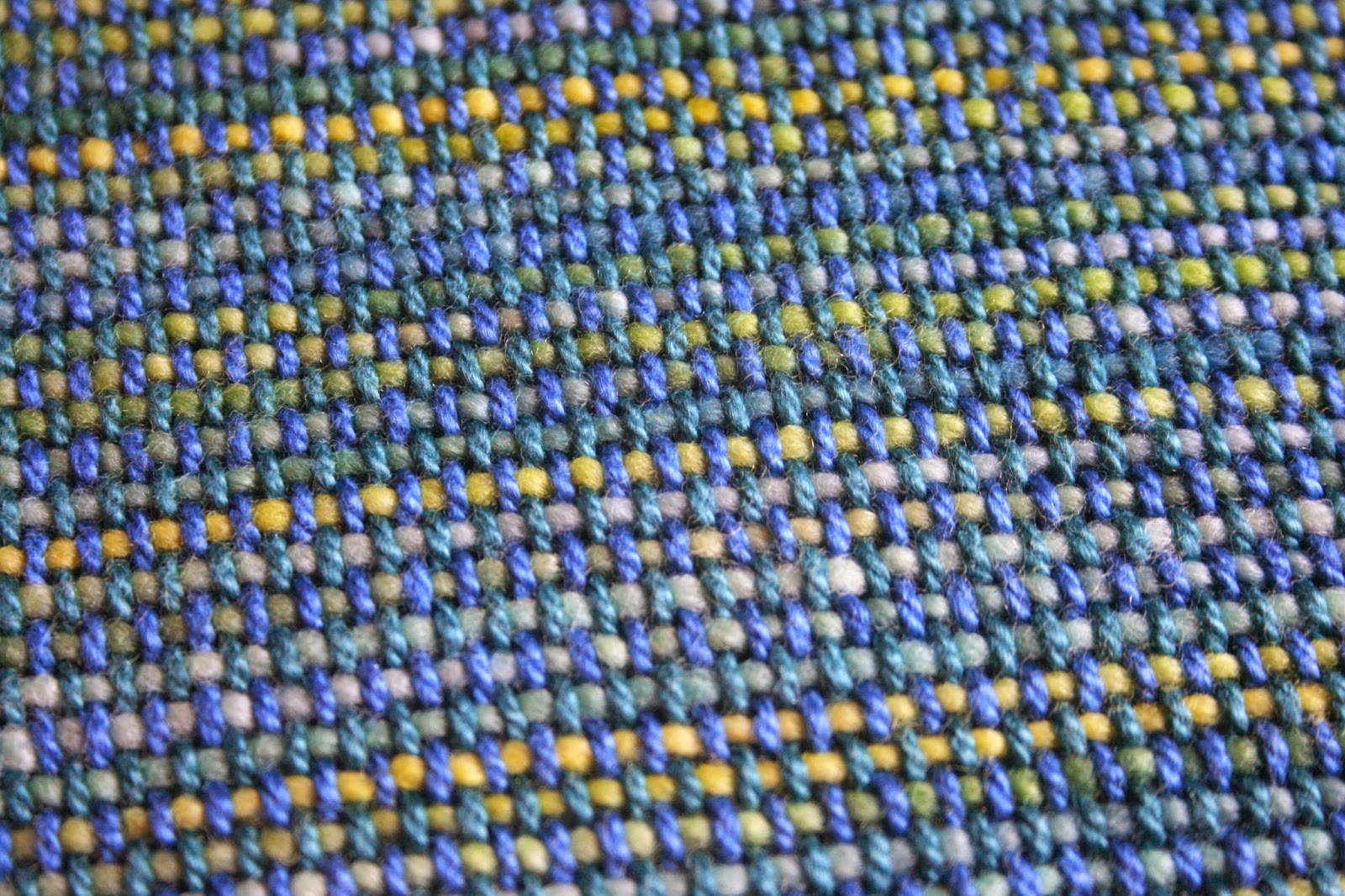 I did plainweave, with blue up in one shed and green up in the next.  Simple and fast!  Once the loom was prepared, I finished weaving this in less than 4 hours. 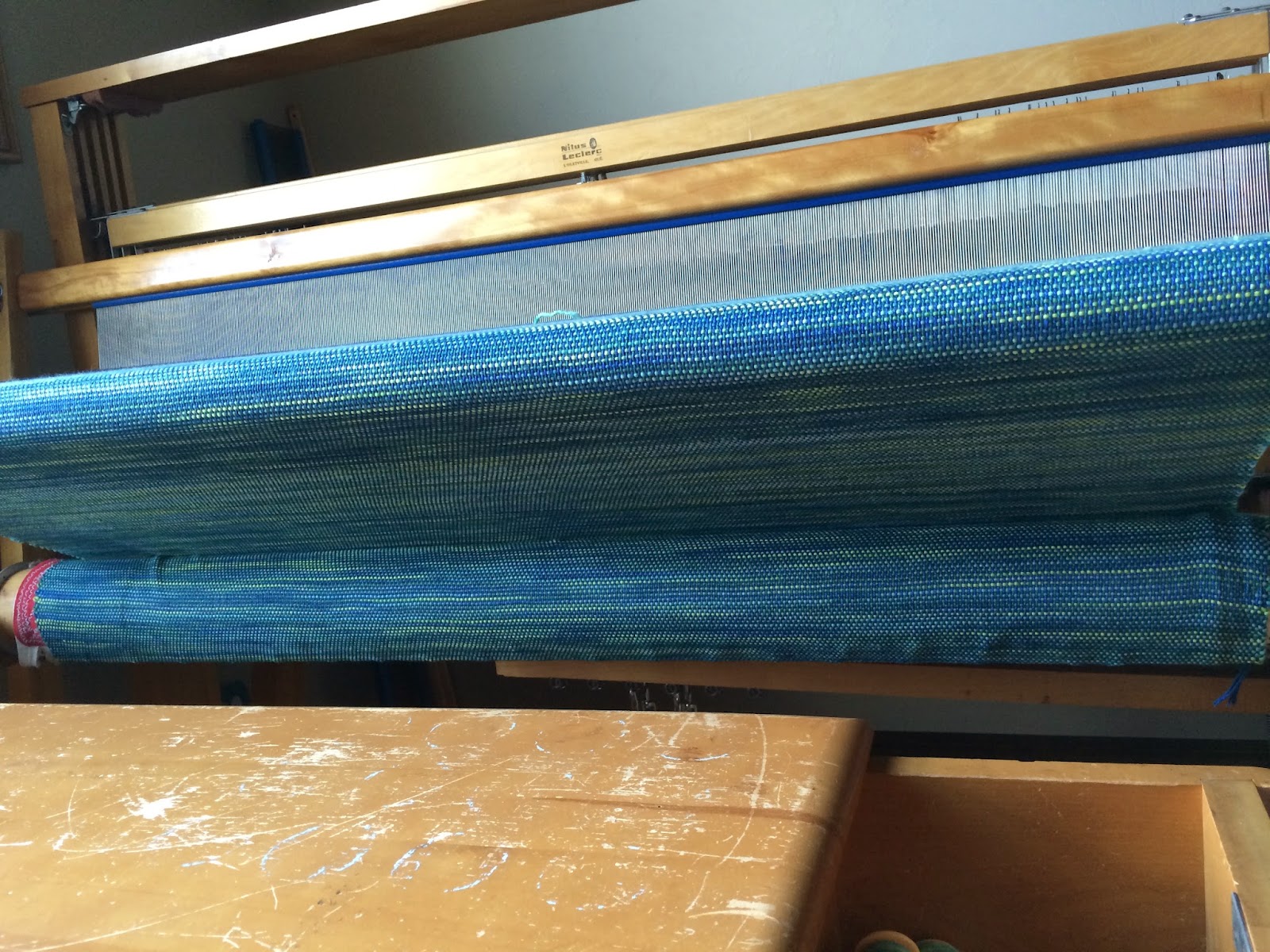 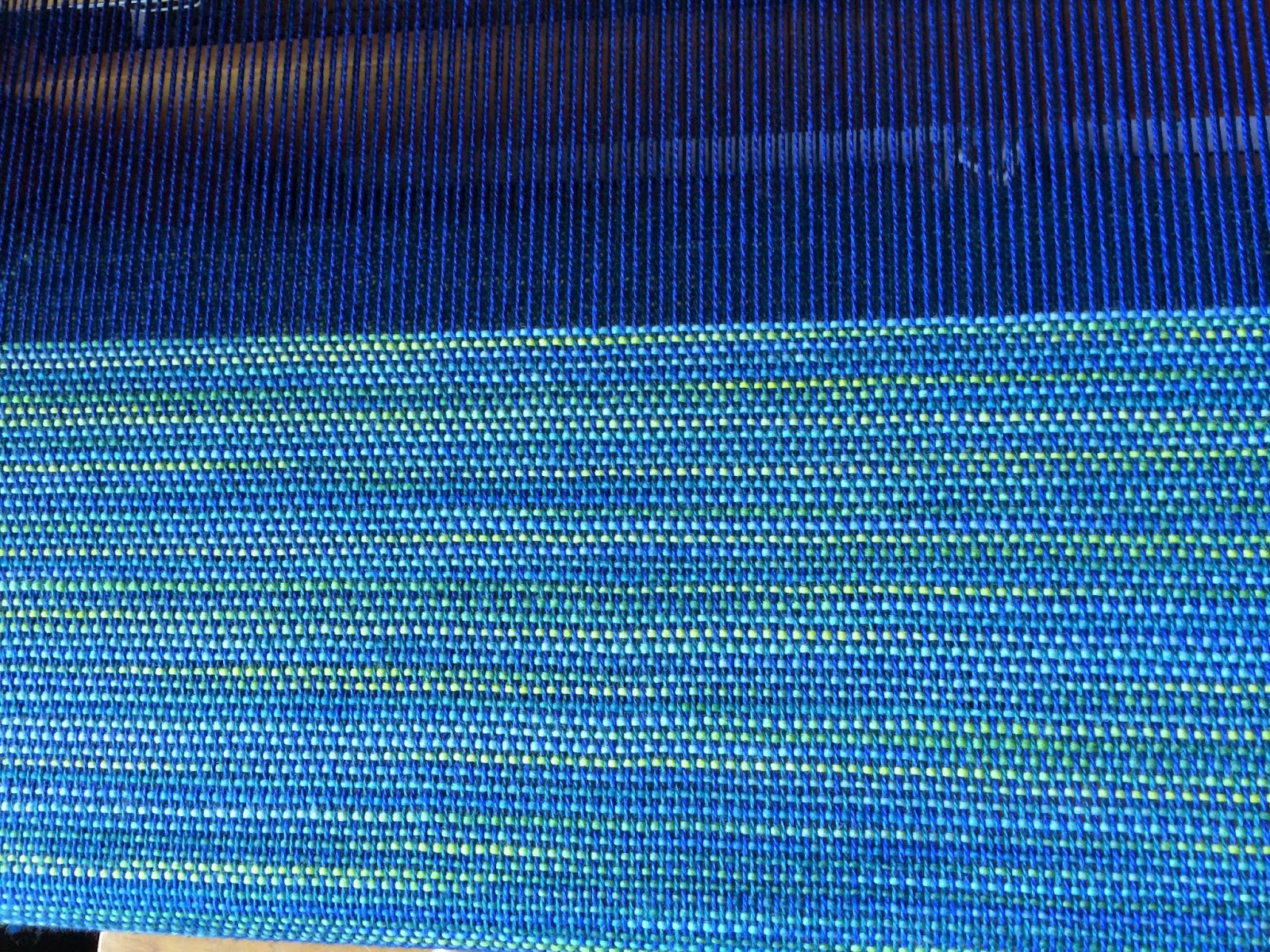 Now Manos Del Uruguay hand dyes their yarns, and I realized after starting that there was a hue difference between the 2 skeins I was using.  I alternated skeins on two shuttle bobbins, but another point of improvement would be to alternate those two bobbins ROW by ROW to better merge the colors. 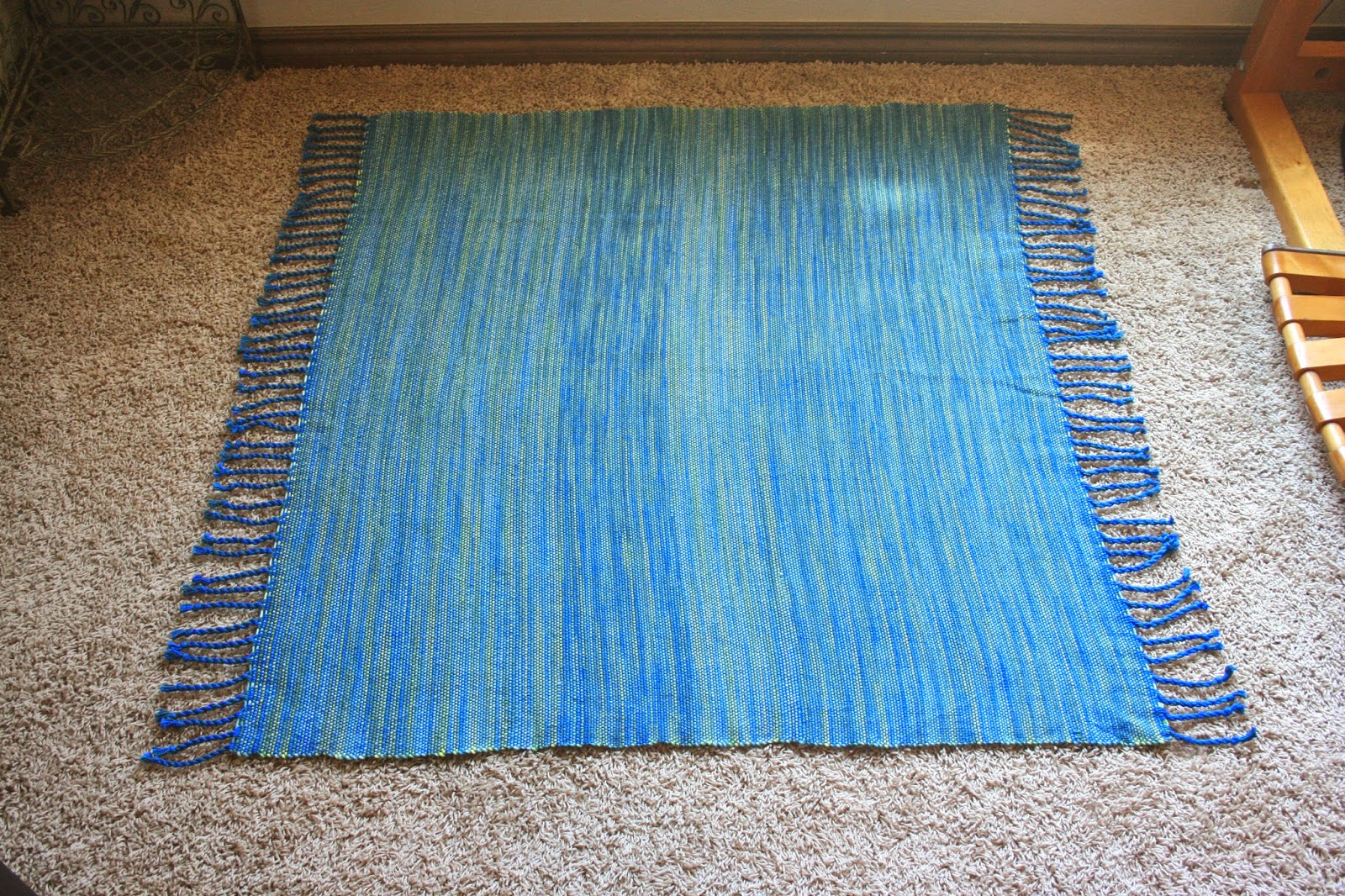 But there is the finished project.  It ended up 45"x43", and is soft and colorful.  I made 4" twisted fringe at each side, and it's beautiful. 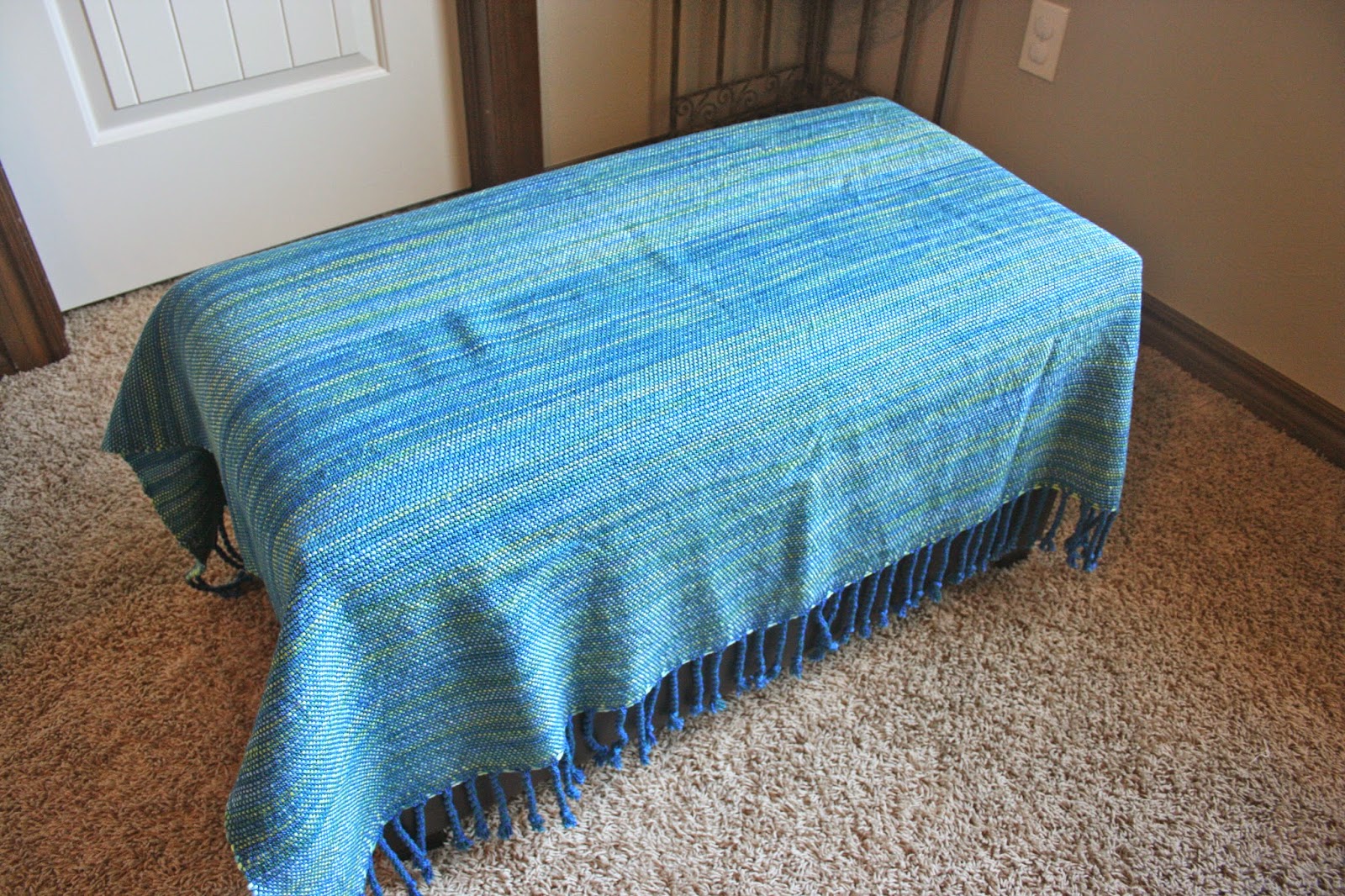 Yeah, I should have pressed it before this picture....but I didn't.  Lazy, lazy...I know. 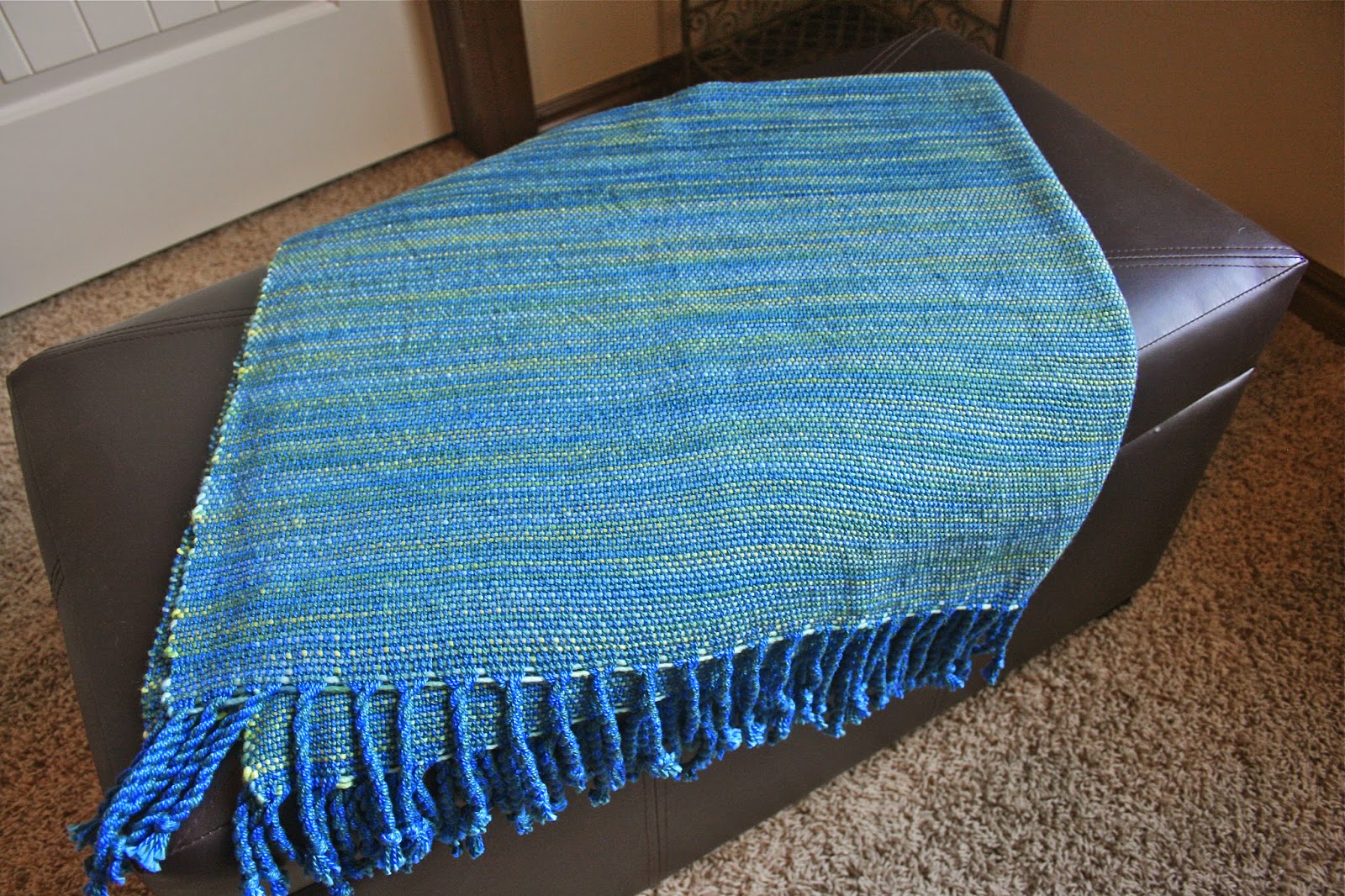 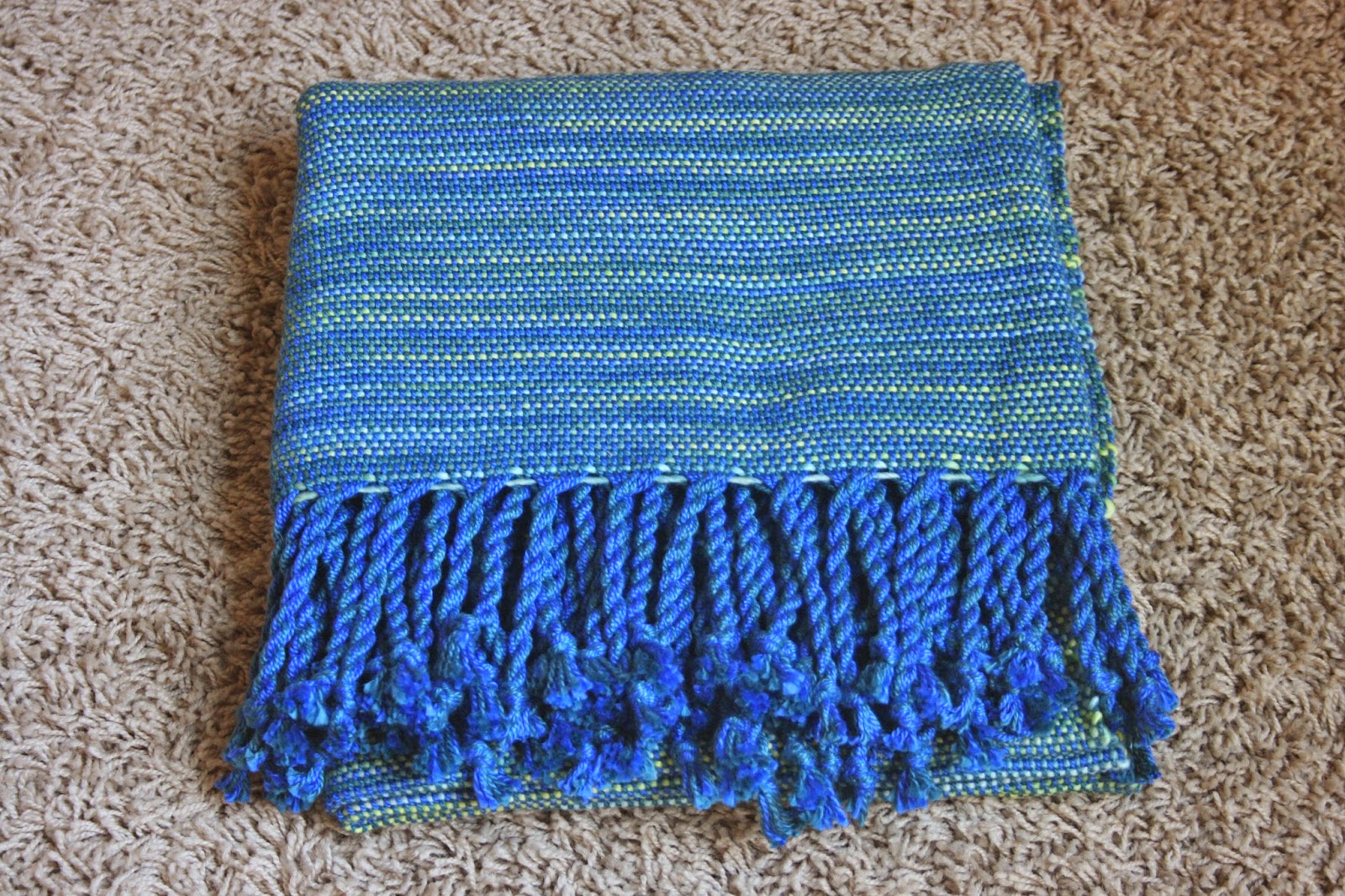 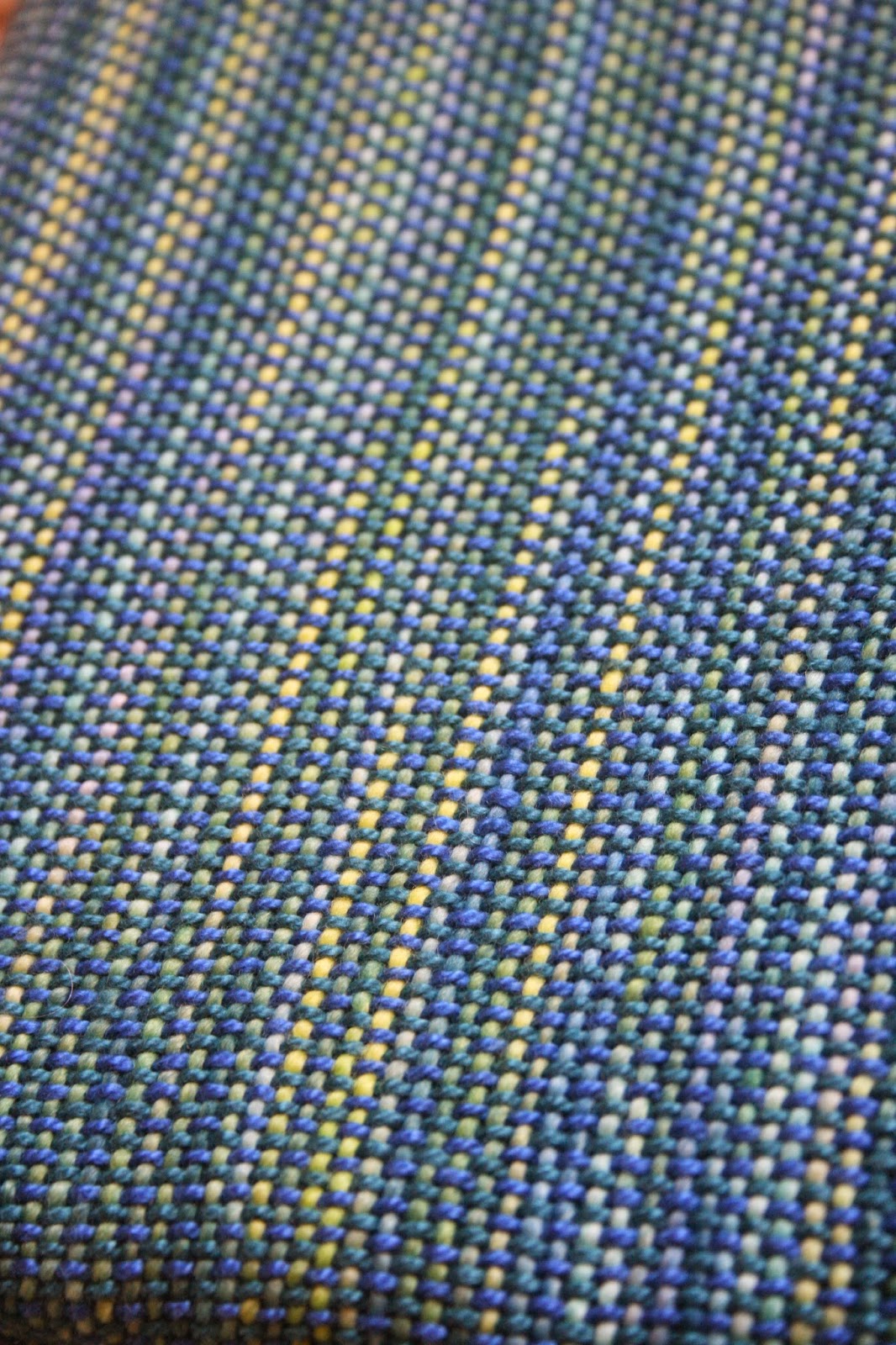 I hope this baby boy will use this up through childhood and wear it till it has holes!  It sure was fun making it!
Posted by Unknown at 1:18 PM No comments: