A wool blanket for me

Lately, I've made a lot of stuff for other people, for sale, or for experimentation, so I decided to get a little greedy.

I am the sort that is always cold.  And I have 3 boys in my family that are hot blooded.  They always want the fan on, so in cooler months (AKA every month except July and August), I love afghans.  My mom has made me a few that have had serious usage.  They're great - made with acrylic yarn and washable, but I was longing for a warmer wool blanket.

A while back, I bought wool for a sweater.  At some point after that purchase, I decided sweaters aren't my favorite thing to knit.  So, I looked for a new idea for this yarn.

Let's start with the finished product photos:  (Yes, it took forever to knit!) 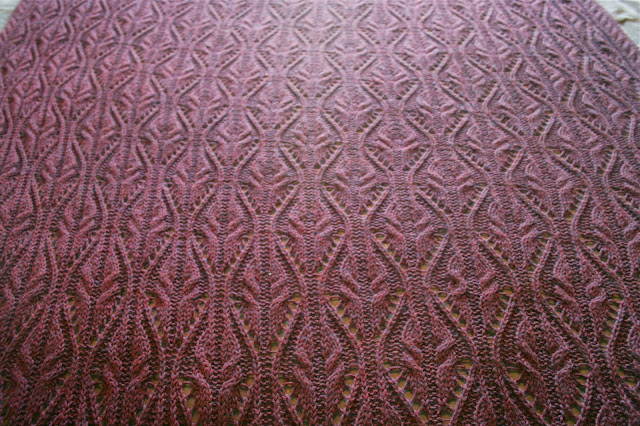 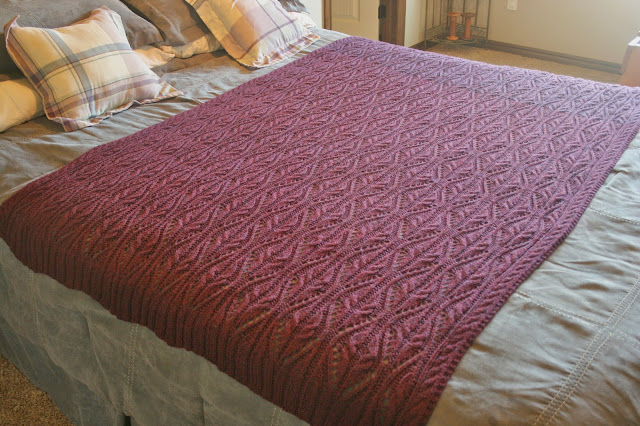 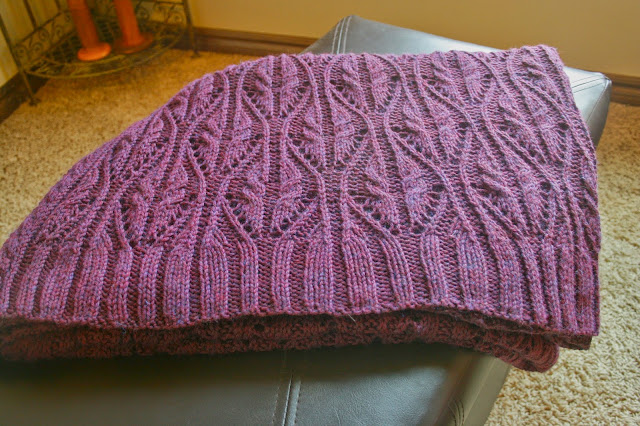 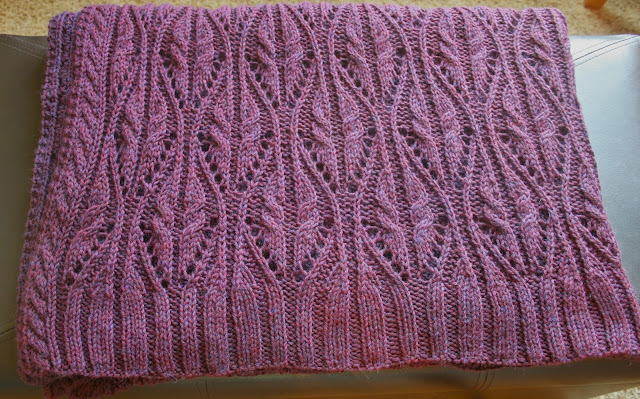 I think it's fantastic.  I used Anne Hanson's Hourglass Throw pattern, and Valley Yarns Northampton yarn in colorway Twilight Heather.  It's a 100% wool, worsted weight.  I had 5 skeins in my stash, which was a total of 1,200 yards worth.  I started in on the lovely lace and cable design.  As I knit, it was so nice to cover up with the blanket as I worked.  I knew even after only having finished 1/3 of it that it was going to be warm!

As I came to the end of my stash of yarn, I realized that the blanket was too short to cover from my neck to my toes, an absolute necessity in Kristi's book of afghan rules.  So I ordered 2 more skeins of yarn.  As you can see in the second picture, near the far end of the blanket, there was quite a difference in the colors from the two dye lots I ended up with.  I WAS SO FRUSTRATED.  Still am, to tell you the truth.  But.  I can't FEEL the difference, and for an item made for myself, I guess I can live with it.  I just don't understand how a major yarn company can mass produce yarn and have such color variances in their yarn.  I guess you get what you pay for in that department...

Ok - off my soapbox now.

The finished blanket measures 60 x 40" and covers me nicely.  It's soft and pretty.  I love it.  I'm currently trying to figure out where I can put it so it is handy to reach from my recliner but also have it be a place where the boys don't use it for a fort, sled, or other reckless boy activity!
Posted by Unknown at 9:42 AM 1 comment:

It's always dangerous walking into Hobby Lobby.  You can relate, right??  I always walk in there for one particular thing, and end up either with a cart full of stuff...or even an inspiration that bugs me until I create it.  This week was the latter.  I saw this yarn:

Yarn Bee Diva Sequin in colorway Kathmandu.  It's a lovely eye-catching yarn full of jewel tone colors like pink, purple, gold and blue.  It has a thin thread containing pink sequins spun into the yarn.  So I got it.  :)

As I was winding a warp for a scarf, letting the yarn flow past my fingers, I realized I must be outside my mind if I thought I was gonna weave with this stuff.  Novelty yarns are awesome in weaving, but they cause their own headaches.  I knew the sequins would be a challenge with this yarn.  But, never one to back down from a challenge, I pressed on.

And yeah, I did have trouble beaming and threading the loom.  The sequins would snag on either the reed, or get caught in the heddles, but with some attention and slow movements with frequent stops, I got it on the loom.  At this point, I looked at the firmly tied on yarn and realized that there was no way I was going to effectively beat in the weft.  On my 16" table loom, I only have a 12 dent reed.  So I called up the Yarn Barn of Kansas, who are SO helpful and fast, and ordered 2 more reeds: a 10 dent and a 15.  They arrived at my door in 2 days!  Thanks Yarn Barn!

Now, the yarn was already beamed, so I simply untied from the cloth beam, slid out the 12 dent reed, and resleyed with the 10.  I was satisfied that the extra width for the yarn to pass through would help with the sequins.  AND IT DID, a lot.

Away I went, weaving plainweave to allow the colors to shine.  I quickly realized that the best way to beat is to throw through one shed, switch sheds, beat and throw.  Then repeat.  Typically, I beat before switching sheds.  But this technique helped.  The weaving went fast, taking only about 3 hours to complete.  I finished it off with tied warps in groups of 4, then trimmed my fringe to 4" on each side and washed it.

What do you think? 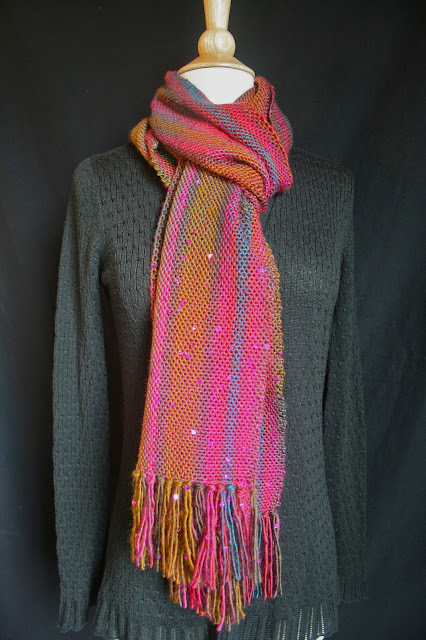 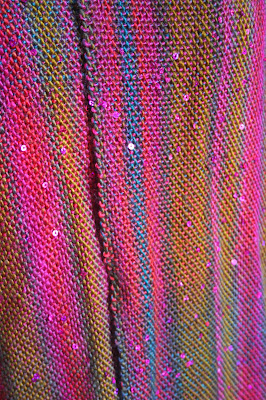 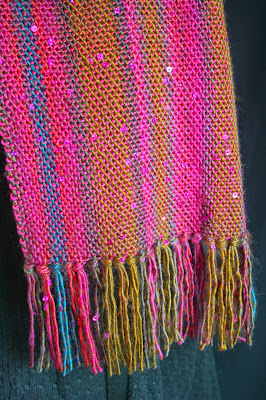 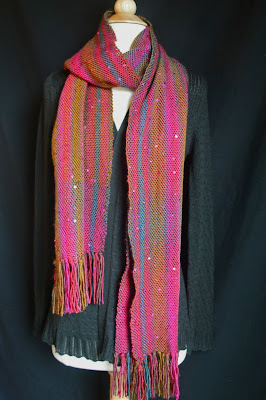 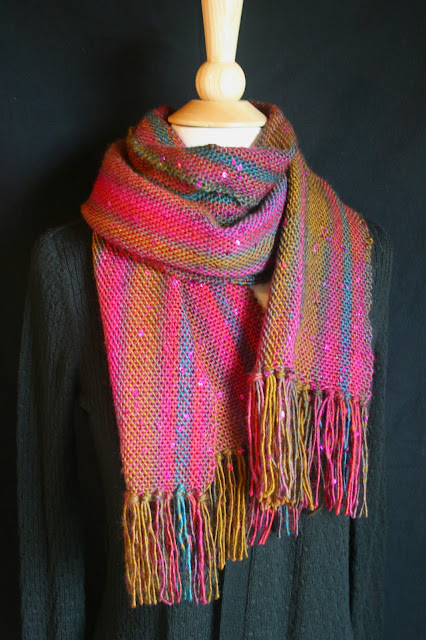 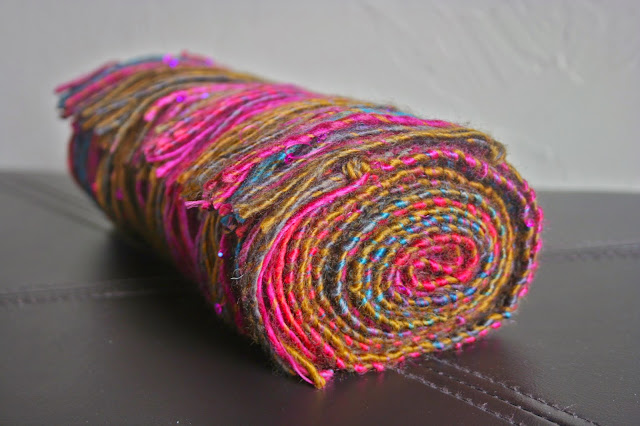 I've put it up for sale on my Etsy page:  More Hours Per Day
Posted by Unknown at 11:30 AM No comments: