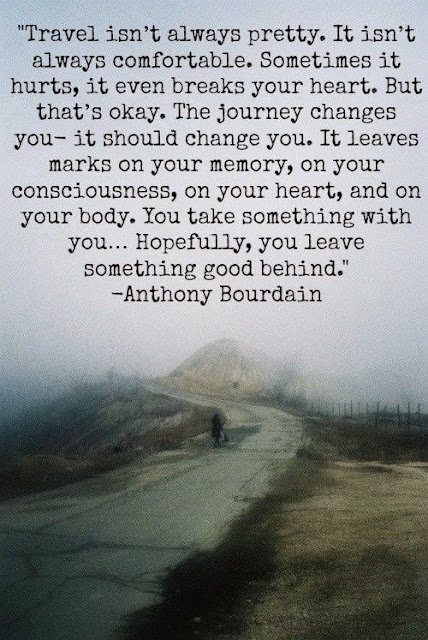 I love this quote by the one and only Anthony Bordain.  Travel changes you, alters your perspective, and leaves beautiful memories in your heart.

Today, our final full day in Europe, we woke up leisurely and went down to eat breakfast.  The place was packed, but we managed to get enough to eat (although I was bummed that I didn't get my morning strudel).  We hopped on the metro and followed the lederhosen to Oktoberfest. 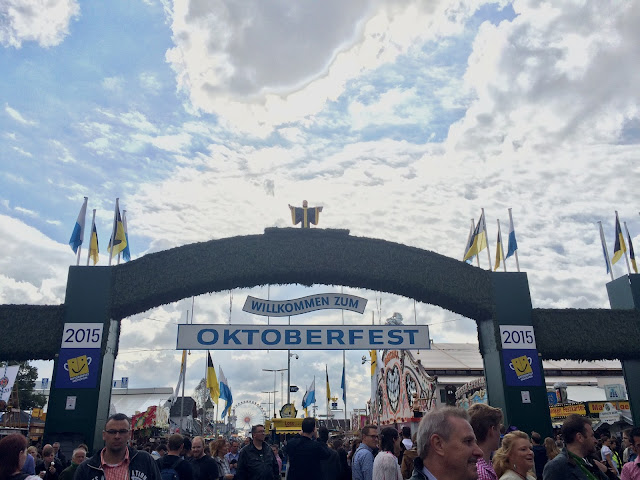 I really didn't know what to expect, but I was surprised that it looked like a state fair on steroids.  There were carnival rides.  Kids shouting in German that, I'm sure, they needed more tickets for their favorite ride.  There were sausage vendors everywhere.  And people.  People in every square inch of the place. 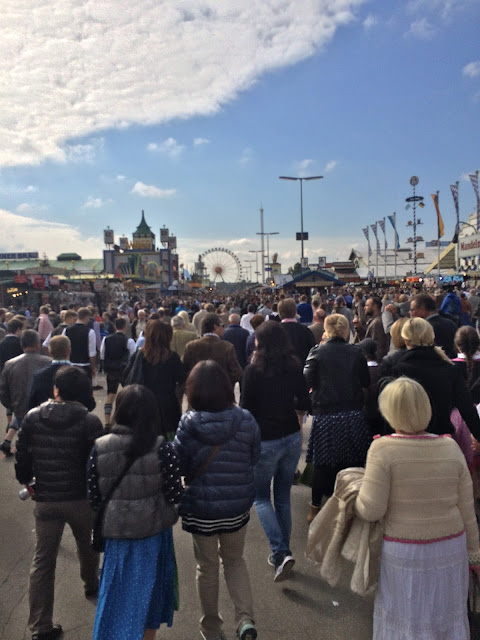 First of all, we walked around a bit, getting our bearings and seeing the sights.  We tried to bee line for one corner of the grounds, where the bands from each beer tent were playing together in a orchestral ceremony.  We got there just after they started, and filled in with the crowd to see. 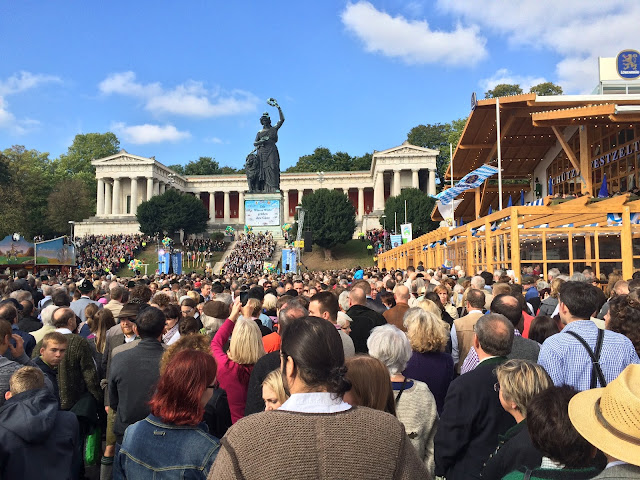 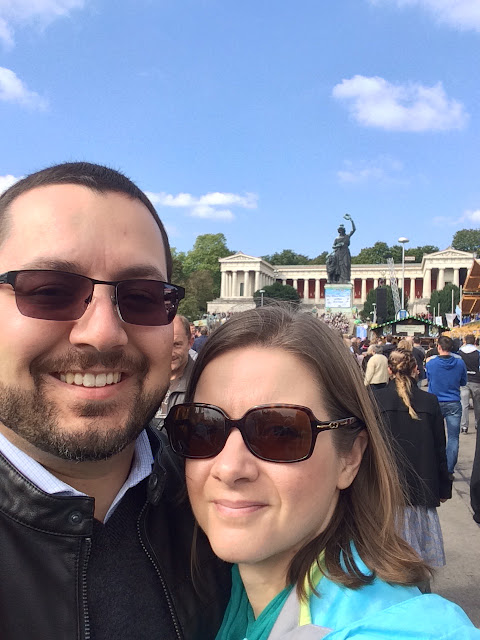 Next, we made our way to the Weinzelt tent.  Now let me say a bit about the "tents".  Each year, the major brewhouses erect huge buildings for Oktoberfest.  Many are steel-framed, some are two-level, and they all contain tons of wooden benches and seats.  They usually center around a stage, where the oompah bands play.

At Weinzelt, we explained to the "bouncers" stationed at the doors that we didn't have reservations (Chris had tried 10 months in advance to get reservations, to no avail), but were wanting to just have a beer.  They pointed us upstairs, where a waitress slid us in between an Italian party and 3 Swiss guys.  They were very insistent that we stay for no more than an HOUR!  Ok, ok. 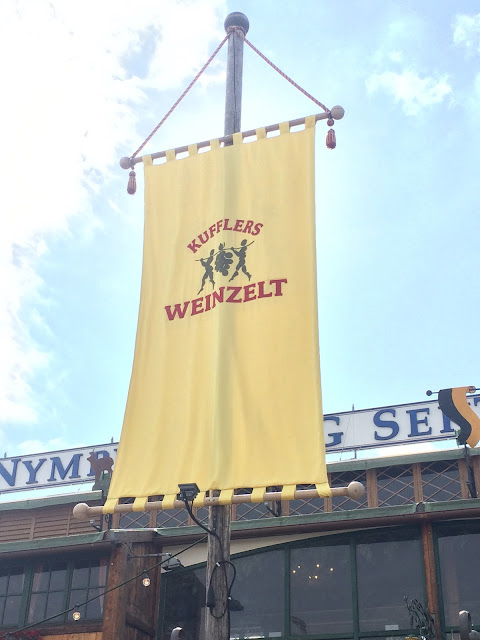 We made sure to stay less than an hour, and decided to see what else we could get into.  We walked around and took pictures of many of the tents: 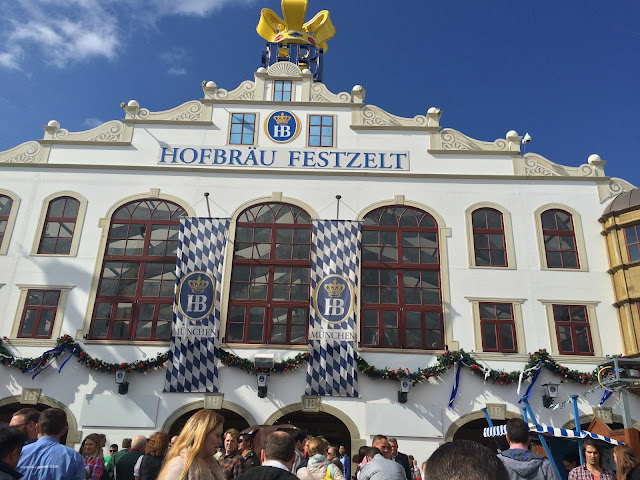 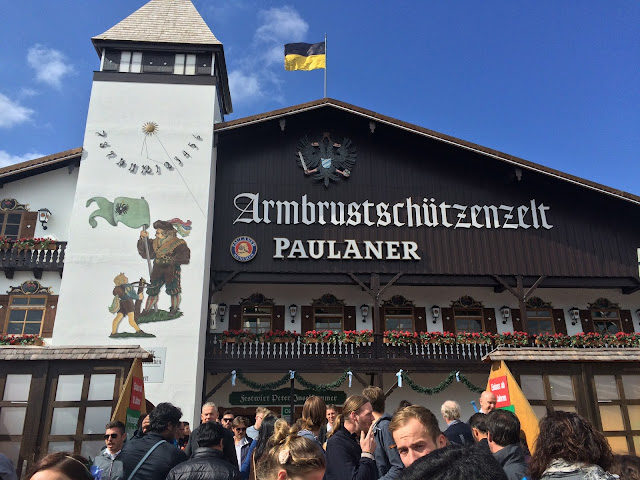 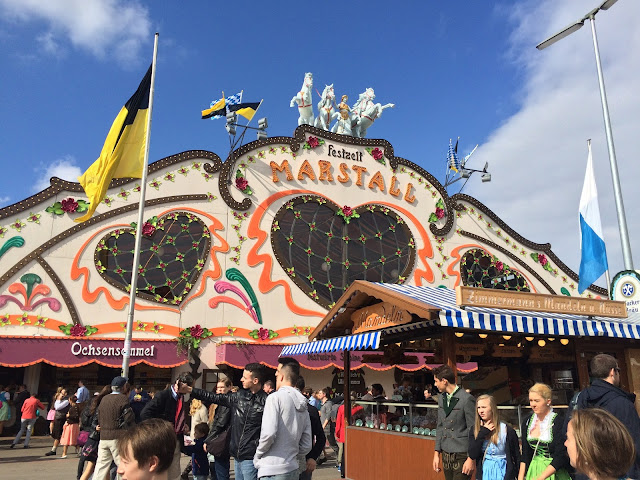 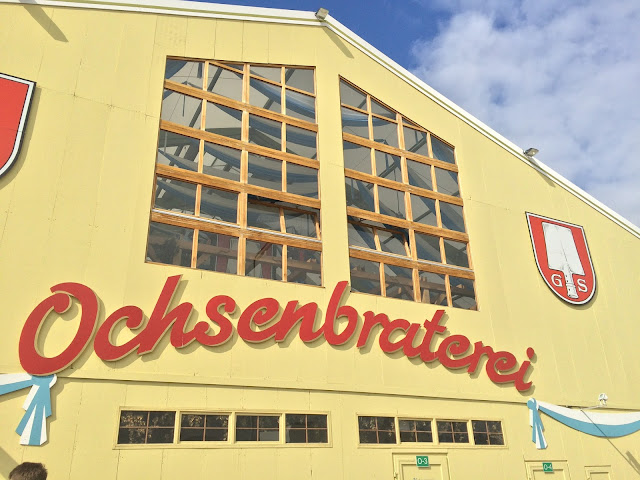 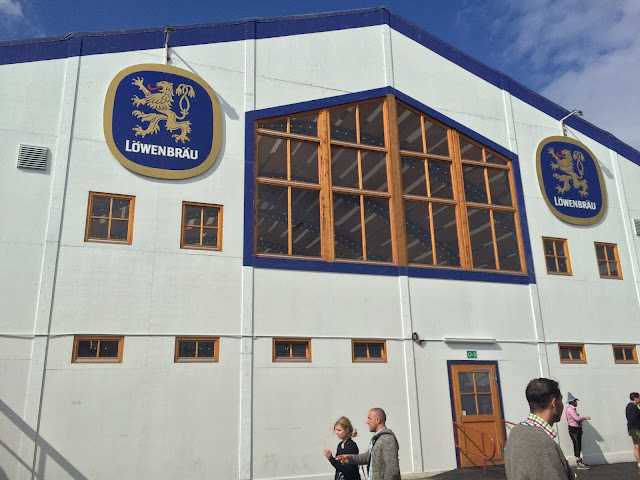 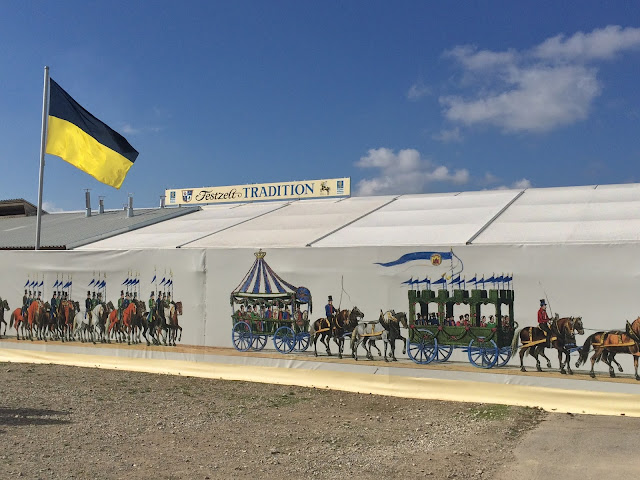 We discovered that it was going to be increasingly difficult to make it into the tents as the day progressed, as the reserved tables were seated.  So Chris picked the Spatenbrau house to try as the last attempt, and we got in.  We caught a waiter inside, and he found us a cranny at a table in the middle of the floor between a rowdy group of drunk men, and a nice family. 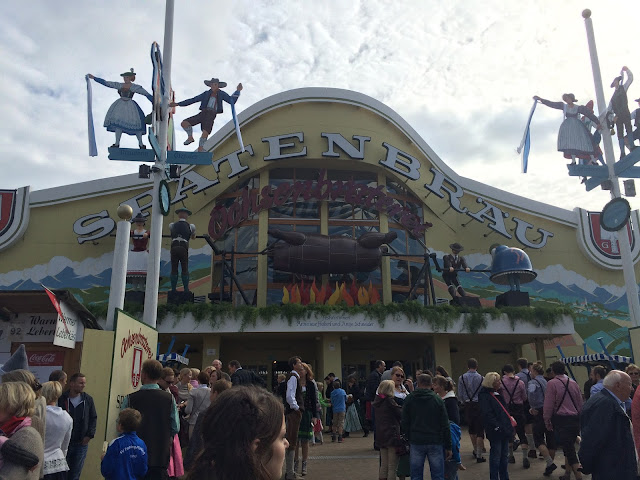 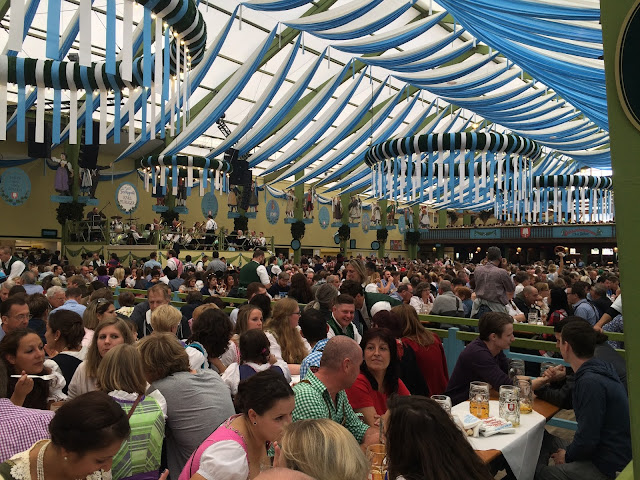 We sat down, ordered an ox entree and a beer, and absorbed the surroundings.  Occasionally, the band would erupt into an obviously traditional song, and everyone would sing along and clink their mugs together.  Very jovial.  Except for the drunk guys, they were getting rowdy.  Once when they nearly dumped the table over on us, Chris said "Hey now, guys", and then they focused on us, speaking in German distastefully about us....  ughhh.   Luckily, they decided to move on, and I was ever so glad.

In the new-found quiet of the table, we were able to communicate with the nice family next to us, learning that they were from Munich and come every year.  They graciously told us some of the history behind Oktoberfest and the Spatenbrau tent, and the traditional garb. 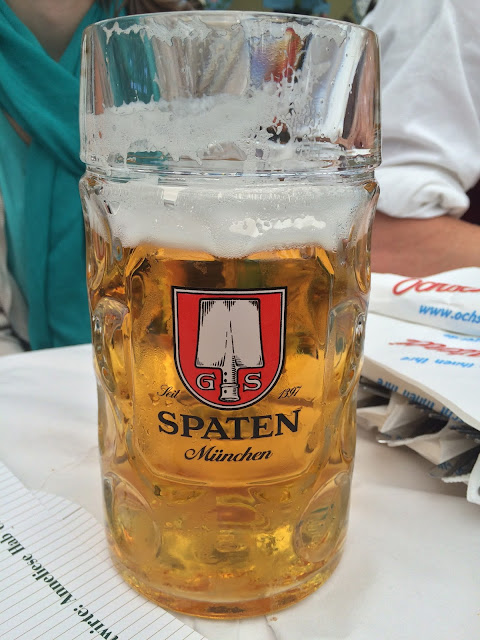 They were even nice enough to pose for a photo with us.  Thank you for making our Oktoberfest experience better, you two.  Wish I knew your names. 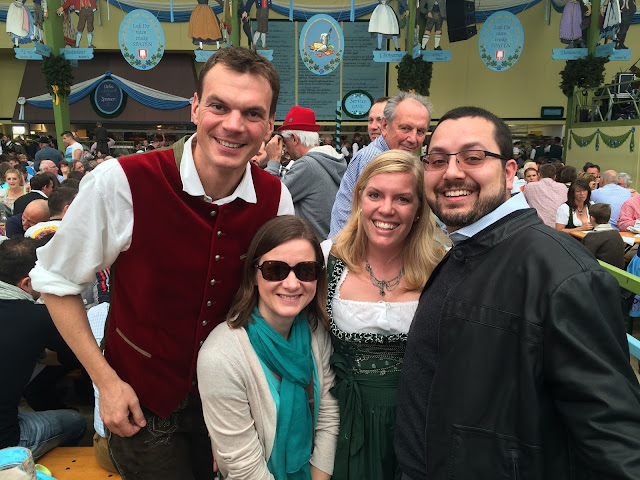 The ox dish was very good, and the family explained to us that we were eating "Richard".  We were confused, and they pointed to the side of the beer tent, where "Richard" was roasting on a spit.  A huge ox, and they figured it'd be swell to share his name.  Richard.  Oh well, thanks for the tasty meat, Richard.

Now to be honest, I hated Oktoberfest.  Loud, drunken, carnival-ly, beer-filled (and I don't like beer)...  I really did try, but I'm sure Chris wasn't fooled.  It was probably plain as day and annoying him.  But being the sweet guy he is, and probably also because it was appearing that we may not have any other success getting into tents, he agreed to allow me to direct him to Alte Pinakothek, an art museum.

Here we saw lovely works from Raphael, Da Vinci and Botticelli, to name a few.  Here were some that we enjoyed: 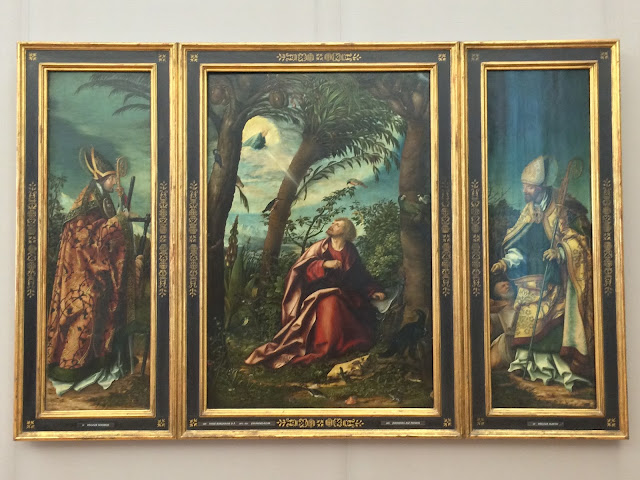 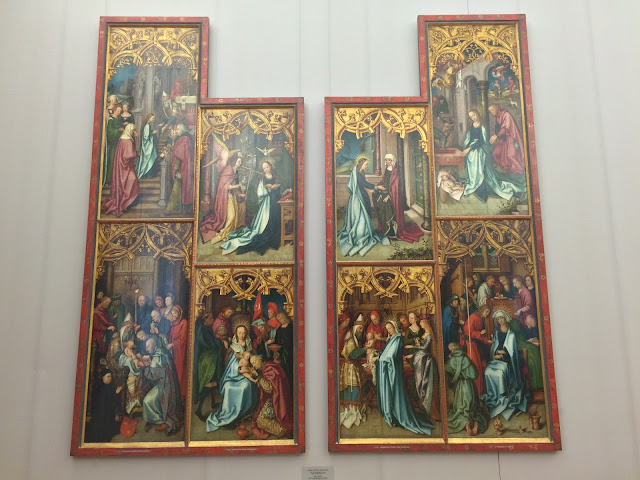 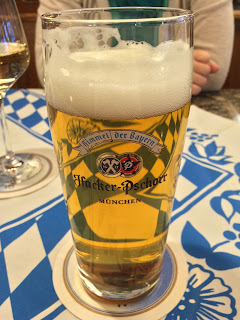 After we toured the museum, we returned to Ostbahnhoff, ate a nice dinner at the train station, where Chris got to try another German brew, and then we returned to our room to pack for our trip home tomorrow!

I'll spare you another post for our trip home, we had a rather uneventful although long trip.  We made it to Atlanta after a 10 hour flight, and though we had arrived on time, we were unable to fly standby on the earliest flight to OKC.  We then had a 6 hour layover, when we'd been up for 12 hours already.  So we ate a nice dinner at the airport, and then I crashed out on the floor of the concourse while waiting for our flight.  We both slept on the flight to OKC, and made it home about 25 hours after waking up the previous day...so we slept.  The next 3 days were spent trying to change our clocks over...but the good news: the boys were happy to see us, and likewise.

Our trip was enlightening, relaxing, rejuvenating, and reaffirming.  I'm so glad we went, and now I know what areas of Europe I want to spend more time in if given the chance!

Email ThisBlogThis!Share to TwitterShare to FacebookShare to Pinterest
Labels: Travel